As Prime Minister Scott Morrison marks one year in the top job on Saturday, he heads to France as an observer of the meeting between leaders of the Group of Seven nations.

As the leaders of seven of the most powerful countries prepare to meet in the coastal French city of Biarritz this weekend to discuss global issues, Australia will join them for the first time.

While he doesn't have a seat at the G7 table, Prime Minister Scott Morrison will attend the three-day summit in as an observer alongside the Indian, Chilean and South African leaders.

"Australia's participation is an opportunity to share our Indo-Pacific perspective with the world's leading democracies," Mr Morrison told reporters in Canberra this week.

Why is Australia going?

The G7 comprises of France, Germany, Britain, Italy, the United States, Canada and Japan and its meetings are known for awkward photo-ops and tense handshakes between leaders.

But Mr Morrison's invitation to the G7 summit is significant, according to one international relations expert. "Australia prides itself on punching above our weight in those kind of international forums, especially as we've played a big role in the G20," RMIT University's Emma Shortis told SBS News.

The official invite may have come from French President Emmanuel Macron, but Dr Shortis said it's a sign of the importance of Australia's relationship with the United States, especially as tensions flare over the trade war with China. "We've had US officials here just recently essentially asking Australia to choose between the United States and China so I think it's really significant in that sense to contribute to those discussions and tread carefully when it comes to the trade war," she told SBS News. Mr Morrison, who marks one year as Australia's prime minister on Saturday, will take part in two special sessions - on digital transformation, and on climate, biodiversity and oceans - as well as attending a leaders dinner.

In the digital transformation session he is expected to build on his G20 victory in June in convincing all members of that forum to crack down on violent extremist material online and on social media.

Mr Macron hopes to have the G7 leaders and invited countries sign up to a charter for an open, free and safe internet that outlines ways to fight hate speech, cyberbullying and online terrorism, which major digital stakeholders will also sign.

Could Australia get a permanent seat at the table?

The possibility of Australia being promoted to the main group, making it a Group of Eight once again, was floated earlier this year.

The idea was sparked by a global ranking of countries' capabilities prepared by London think tank the Henry Jackson Society that put Australia eighth, ahead of Russia which was booted out when it annexed Crimea in 2014. 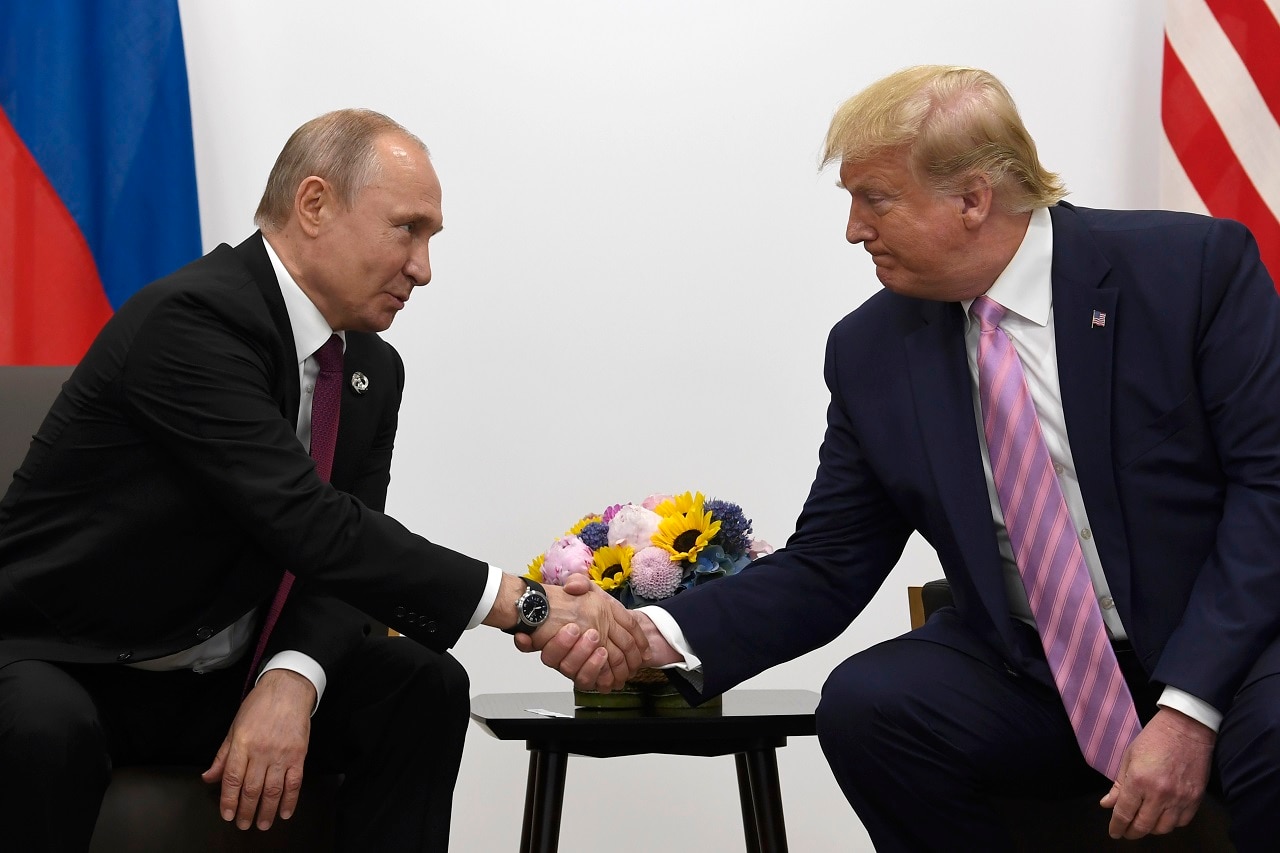 Donald Trump thinks Vladimir Putin should be invited back to the summit making it the G8 once again.
AAP

But it would take a lot more to convince the other leaders to see Australia and its comparatively tiny economy as worthy of a permanent place.

US President Donald Trump prefers the idea of inviting Russia back to the group, suggesting it again this week.

Dr Shortis said the comments would come as little surprise to the other leaders.

"Trump likes to shake up the G7, he doesn't really like it as a forum."

It's also unlikely Mr Trump's suggestion will gain any traction this time, but when the US hosts the summit next year, Mr Trump will wield much more influence.

Who to look for at this year's G7

New British Prime Minister Boris Johnson's presence is expected to shake up the dynamics at this weekend's meeting.

Unlike his predecessor Theresa May, Mr Johnson is closely aligned with Mr Trump when it comes to anti-European Union and protectionist policies.

"Johnson will throw another spanner in the works given the kind of dynamic he's got with Trump, but also the broader dynamic with Europe in terms of Brexit," Dr Shortis said.

"So it has the potential definitely to be quite a tumultuous meeting." Francois Heisbourg, senior advisor for Europe at the International Institute for Strategic Studies, agreed, said the combination of Mr Trump and Mr Johnson meant he would be watching this weekend's events with interest - and a little trepidation.

"The combination of two personalities who are not well known for their self-control is indeed going to be an unprecedented occasion. They will probably get along like a house on fire, or they will pretend to," he said.

"Whether this will be simply a side-show, which will create some distraction and possibly even amusement, is one thing, but if it actually gets into the way of the more substantive proceedings, that would be another story. But these two together are political nitro-glycerine."

Mr Trump walked out of the last G7 meeting in Canada and instructed his officials not to sign the official communique, throwing the summit into disarray. Mr Morrison said on Friday he was looking forward to meeting Mr Johnson to talk cricket and the recent announcements about multinational force involvements in the Straits of Hormuz.

"I suspect I will give Boris a hard time over the cricket and he would try to do the same with me, too. That is the nature of the relationship.

"And I suspect the prime minister of India would take a shot at both of us on that front." Trump and Macron had a long handshake at last year's G7.
SBS

He will also be hoping for another chance to speak to Mr Trump ahead of his official visit to the White House slated for next month.

At the G20 in June, Mr Morrison scored a dinner with Mr Trump and a host of high-level officials. The opportunity for a discussion over a meal, albeit last-minute, was considered a coup and a sign of high regard.

What will the key talking points be?

The G7 has been criticised in the past for delivering little concrete outcomes. Last year's meeting was best remembered for the "handshake showdown" between Mr Macron and Mr Trump.

Inequality is the theme of this year's summit, so the gender pay gap, poverty and opportunities for young people will feature on the agenda.

That's on top of the usual agenda items focusing on security, the economy and the environment.

✨📣 The @G7 #GenderEquality Advisory Council calls on all nations to: https://t.co/7qdNRAZQLf

The Hong Kong protests are also expected to come up, while Mr Macron is pushing to put climate change action on the agenda, against Mr Trump's wishes. And despite the worthy theme of equality being listed this year, it has not stopped protesters from setting up camp on both sides of the French-Spanish border near Biarritz ahead of the summit.

"We are at a stage where this capitalism, we can't take it anymore," he said, speaking in French.

"We don't want this capitalism. What we want is to live in peace, united, in fraternity, as equals and in particular to be free. A freedom that we don't have today."