The March quarter national accounts show Australia's economy shrank 0.3 per cent at the start of the year, but was cushioned by exports and government spending.

Treasurer Josh Frydenberg has confirmed Australia is now in a recession as the economy reels from the coronavirus pandemic.

Mr Frydenberg's confirmation came after the Australian Bureau of Statistics reported the economy shrank by 0.3 per cent in the March quarter, on the back of the bushfires, drought and coronavirus pandemic. 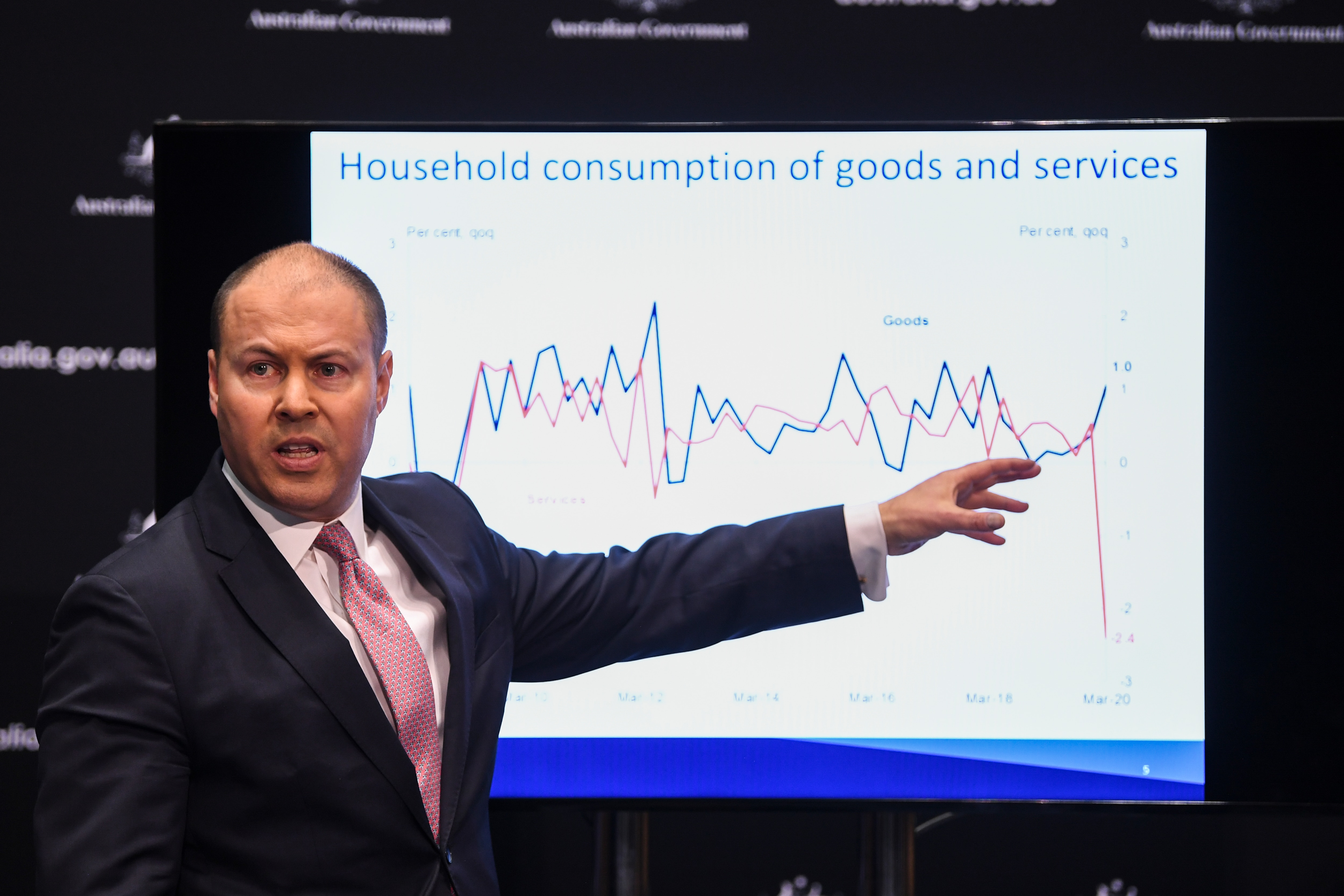 Asked whether the country was now in recession, he said: "Well, the answer to that is 'yes'. And that is on the basis of the advice that I have from the Treasury department about where the June quarter is expected to be."

Mr Frydenberg said the Treasury is expecting "a contraction in the June quarter which is going to be a lot more substantial".

"Treasury were contemplating a fall in GDP of more than 20 per cent in the June quarter - this was the economists version of armageddon," he said.

"Notwithstanding the success of the health measures that we have put in place, they have come at a significant cost, which is illustrated in the national account numbers today."

The March quarter national accounts, released on Wednesday, show growth for the year slowed to 1.4 per cent.

Australia is on the way to recording its first technical recession in almost 30 years (2 negative quarters in a row).

March Qtr -0.3% and expectations this quarter will be around -8.5% when those results are out in 3 months @SBSNews #ausbiz #onthemoneysbs pic.twitter.com/5RTElhoMli

That's the slowest annual growth rate since September 2008, when Australia was in the midst of the global financial crisis.

The size of the hit was cushioned by increased government spending, which added 0.3 points to GDP, and strong exports, adding 0.5 points.

But household spending dropped by 1.1 per cent over the quarter.

This was the first drop since December 2008 and the annual result of a 0.2 per cent decline was the weakest since March 2009.

There was an unprecedented fall in spending on services - as social distancing rules and travel bans were introduced - and investment in housing continued to drop.

Summer's bushfires led to a strong drop in tourism-related activity, including travel, accommodation and food services in regional areas, while $1.4 billion was paid out in insurance claims.

But the natural disaster also drove increase government spending, with defence spending growing 1.1 per cent in the quarter as troops were deployed to help, and total state and local government expenditure jumping by 1.9 per cent. The GDP figure is in the range anticipated by economists.

The June quarter numbers, which will be revealed in September and feed into the 6 October federal budget, are widely expected to be much worse - in the realm of a nine per cent contraction.

"Whichever way you look at it, Australia will be in recession," Commonwealth Bank senior economist Belinda Allen said.

NAB head of markets research Ivan Colhoun said the size of the shock in April and May brought on an "instant recession".

Today’s National Accounts confirm our economy shrank in the first three months of this year before the worst impacts of the virus were felt. The economy has deteriorated further since then which means Australia is in recession for the first time in nearly three decades. #auspol

"You couldn't travel, you couldn't go to work, everything just stopped," he said.

The Reserve Bank said the depth of the economic slump could be less than predicted.

But governor Philip Lowe has reiterated the highly uncertain outlook and again called for the government to keep its fiscal support in the economy.