A chief economist for the United Nations has urged Australia to prioritise climate action above pouring money into fossil fuels in its coronavirus recovery.

A United Nations chief economist has urged Australia and other countries across the world to place more ambitious climate action and investment in clean energy at the centre of their COVID-19 recovery plans.

Elliott Harris is helping lead the UN's development of policy advice for nations grappling with the pandemic.

Mr Harris appeared on a webinar with progressive think tank the Australia Institute on Wednesday, where he was questioned about how the Australian government should shape its recovery from the pandemic.

He said developed nations such as Australia must be willing to make difficult decisions and prioritise a "green recovery".

“What we’ve seen in this COVID crisis is that governments are indeed capable of really ambitious, rather unorthodox, extremely important and even massive interventions,” he told the webinar.

“I can think of no stakes that are higher than the climate crisis that we are living in right now."

"We will not be able to sustain life on this planet if we do not get a grip of climate change and time is running out, we have to be able to move toward a low-carbon structure & everything that we do from now, has to have that in mind" -Elliott Harris, UN chief economist #auspol pic.twitter.com/XfP2NnrOjO

UN Secretary General Antonio Guterres has stressed coal should play no part in any country’s post-coronavirus stimulus plan, while business leaders in Australia have also been putting pressure on the federal government to prioritise renewable energy projects.

The head of the federal government’s COVID advisory committee Nev Power told a Senate committee on Tuesday he has been approached about locking in a low emission future. The former Fortescue Metals boss said he did not oppose the idea, but would not recommend "a green recovery, per se".

Mr Power also confirmed the COVID committee has asked the government to underwrite new investment in gas pipelines as part of recommendations from a manufacturing taskforce.

“This is a critical choice that all countries have to make and all investors have to make,” he said. “There is a very difficult trade-off, there is no doubt about it."

"[But] we really need to think about how we shift the flow of investment towards sustainability.

“The fact of it is that, unfortunately, the world does not have the luxury of allowing itself of continuing down the path of fossil fuels." But the government has come under scrutiny for not having a 2050 target, with the Business Council of Australia, Australian Industry Group and big miners Rio Tinto and BHP all backing a net zero-emissions goal by then. 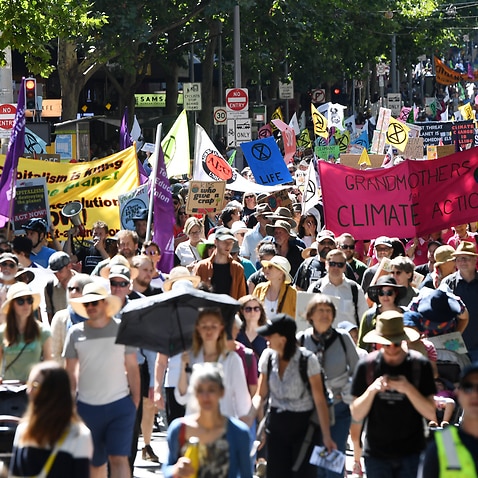 Australia is considered one of the world’s largest exporter of fossil fuels through coal and liquified natural gas projects, but also a leading investor in renewable energy.

The UN has predicted the world economy will shrink by 3.2 per cent in 2020 because of the economic downturn forced by the pandemic.