Australia's fashion industry is increasingly embracing diversity, but is it tokenistic?

The Australian fashion industry is increasingly showcasing diversity on its runways and in campaigns. Here, insiders reflect on how far the industry has come and what else they'd like to see change. 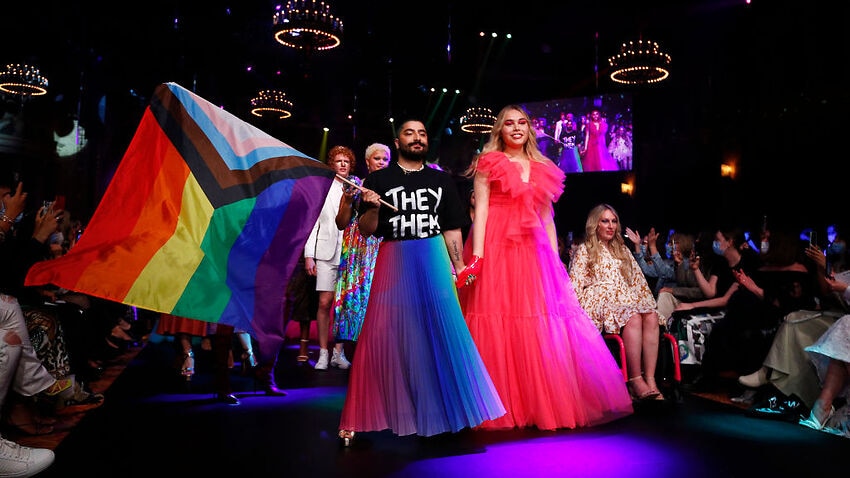 This article contains reference to suicide.

The opening night of Melbourne Fashion Week this week was packed with all the glamour and glitz you'd expect, plus a cast championing diversity and inclusion.

At the conclusion of the Plaza Ballroom Runway show, stylist Deni Todorovic led the cast down the catwalk proudly waving a rainbow flag, sporting heels, a beard, and a skirt.

The LGBTIQ+ activist, who identifies as non-binary, believes shows like this have the potential to change lives.

"In Australia, trans[gender] youth are eleven times more likely to attempt suicide than their cis[gender] mates, and the reason is because they do not see themselves in the world," Todorovic said.

"They do not feel valued or appreciated, and so visibility and inclusion literally has the power to save lives."

Over the last 18 months, while working with brands including Kmart, David Jones and The Body Shop, the stylist and content creator has met resistance.

"These brands, I have been honoured to work with. But it always upsets me that their customers get so cranky about a person with a beard in a dress," Todorovic said. "[There has been] pushback for sure. It has been really tricky."

But Todorovic is keen to continue working to de-gender fashion.

"Otherwise, it is never going to happen, and we need to pave that way for future generations so that in three years’ time when someone sees a person with a beard in a beauty campaign in David Jones, people just blink and they miss it - it is not a big deal."

Disability advocate and model Rhiannon Tracey appeared at the Plaza Ballroom Runway this week in her wheelchair, appearing front of stage in the finale.

"[The] night was a perfect presentation of people coming together. The vibe was incredible," she said.

Afterwards though, she was disappointed to see herself cropped out of photos posted on social media, which focused on LGBTIQ+ celebrations.

"For me, that was quite frustrating because I was there for a reason and I was there to represent my community," she said.

"I felt that what I was seeing left me not included."

'Now is the time to do it properly'

While brands and organisations have been increasingly showcasing diversity in their campaigns and events, questions have been asked whether the visibility actually benefits the groups it intends to support and if it amounts to merely being a box-ticking exercise for upper management.

When Todorovic started out in the fashion industry 13-years ago, they said diversity on Australia's catwalks and in campaigns was tokenistic.

But without those "moments in the sun", they said, the LGBTIQ+ community would have had no visibility at all.

"Ten years ago, it was quite rare for brands to do big money-grab campaigns, so we needed someone to do it, just for the sake of ticking off that box,"  Todorovic said.

"Now next year, everyone needs to be doing it authentically because we have had the tokenism - now it is time to do it properly."

Indigenous designers are being showcased like never before at one the country's most prestigious fashion events. First Nations designers, models and artists are all playing a starring role as Melbourne Fashion Week returns after prolonged lockdowns. @Sarah_Collard_ @NITV pic.twitter.com/roS9Oy0K2U

Tracey said she believes Australia's fashion industry is on its way to being more inclusive.

"I have been in the chair for 12 years now. And where we are at now and where we were at 12 years ago - we have made huge leaps and bounds.

"I think the more conversations that [are] had, the more driving forces we have behind making this an everyday, normalised thing."

Founder of creative agency BE. ONE Creative, Grace Dlabik, who is of Melanesian Papua New Guinean background, said the fashion industry can only be truly inclusive if its upper management is overhauled to include people from underrepresented backgrounds.

"If something is not working you have to dismantle it and start again," Dlabik said.

"I believe that we have to dismantle the system for us to be able to rebuild it holistically."

Grace Dlabik is founder of Be. One Creative Source: SBS News

She said Australia is a multicultural country, but that is not often reflected in senior management.

That's a change that is "long overdue", said Jarin Baigent, the owner of the activewear company Jarin Street.

Baigent set up Jarin Street to highlight the work of Aboriginal artists and give them a safe pathway to get their designs to market.

She is also co-founder of a collective of Aboriginal businesses called Trading Blak.

The collective has a pop-up store at Melbourne Fashion Week, where Ms Baigent is proud to see Indigenous people on runways applauded and celebrated.

"But I think it is important to note that Aboriginal people have been around and in fashion for a really long time," she said. "Now it is starting to be more visible across the mainstream touchpoints."