The ground station - which helps track fast-moving events such as bushfires and could enhance Australia's space exploration - has begun operating in Alice Springs.

Arrernte man Peter Renehan has made history in Australia as the first person to be at the helm of an Aboriginal organisation owning and maintaining a commercial Earth ground station, which opened for operation this month in Alice Springs.

Based in Central Australia, the Centre for Appropriate Technology (CfAT) has an Aboriginal workforce of more than 50 per cent and were the leading drivers behind the infrastructure of the commercial satellite station. Mr Renehan, the chief executive officer of CfAT, said being behind the project puts Aboriginal people in a league of their own.

“Often remote Australia and outback Australia are overlooked as contributors ... this project shows that we can do some really complex projects based out of the bush, particularly here in Central Australia,” he told SBS News.

“We are in a unique location, it’s a fantastic opportunity for an Aboriginal organisaiton in Alice Springs to be at the forefront and this is the first of its kind on Aboriginal-owned land in Australia and it’s something we are very proud of.” Job opportunities have been provided to the local community.
Indigenous Business Australia

The infrastructure of the facility took around two years to construct and brought abundant job opportunities to the local community.

And while CfAT continues to run the maintenance of the facility, employment opportunities for the local community will continue to flow.

“We are currently and will continue to provide maintenance to the facility ... there’s going to be ongoing maintenance that has to take place over a long period of time, so our guys are being trained up to be able to offer that,” he said. “As more opportunities like this arise, we are developing the capacity of Aboriginal staff to be able to take on future roles as well. That’s really exciting for us.”

But this effort wasn’t without difficulty. In 2015 CfAT had their government funding cut, and Mr Renehan was worried they would have to shut down.

Through countless board meetings and deciphering how to keep the company afloat, they turned to the hectares of land in which CfAT was sitting on, just 10 kilometres south of Alice Springs.

“We really had to think about how we can sustain ourselves into the future, and because we had significant land assets, that was one way that we thought we could better utilise those assets,” he said.

From there, a collaboration with the United States-based communications company Viasat was born and progress towards a commercial satellite station began, utilising CfAT's land for science development.

“We’re in a unique location where we are able to access the infrastructure either above and below the ground to help support satellite dishes on our start, so from there negotiations started with Viasat,” he said.

Mr Renehan said he hopes the resilience of CfAT speaks widely to other organisations who might be doing it tough.

“We are really proud to be able to say we have gone through some really tough times, but by thinking differently … shows that you can continue to get it done,” he said.

The facility has now become part of a global network known as Real-Time Earth ground stations, tracking low orbit satellites and feeding back the data in real-time to the end-user. 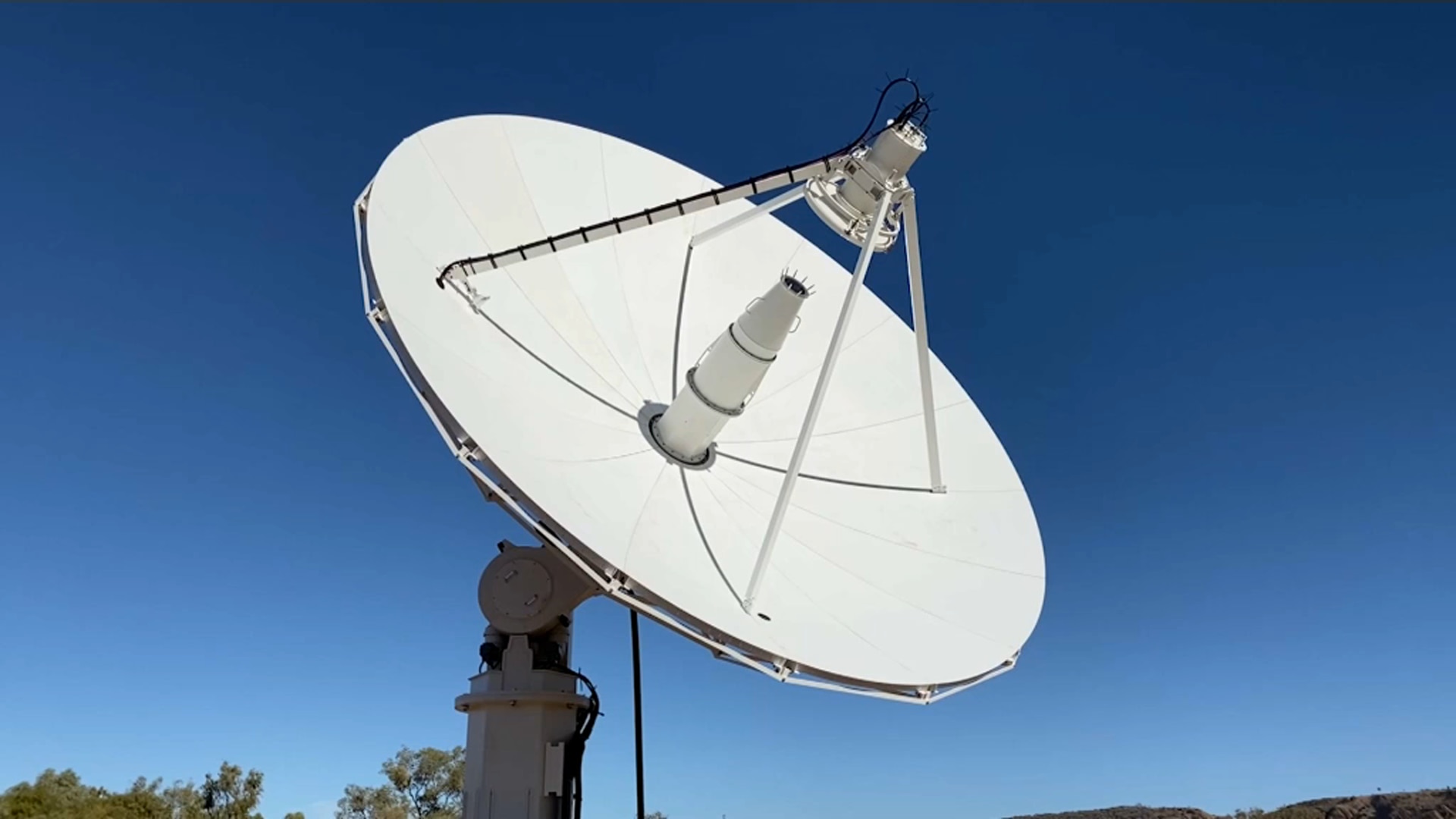 It will be able to track fast-moving events like bushfires, oil spills in the ocean, floods, and tsunamis, as well as lending a hand in search and rescue missions.

“That information will then be distributed to the end-user … it’s pretty quick, so the economic opportunities would be quite significant,” said Eddie Fry, the chairperson of Indigenous Business Australia (IBA) and a Dagoman man.

The project was funded by IBA, who said it was a “great opportunity for Indigenous Australians” to get involved in enhancing Australia’s space sector.

“As this business footprint expands over Australia, this is a good opportunity for Indigenous organisations to establish a toehold in this new business opportunity,” he said. Because of CfAT’s speciality in providing infrastructure labour to Central Australia, mostly to Aboriginal and Torres Strait Islander communities, Mr Fry said they were the model business to take the reigns on the facility’s framework.

“This is a significant step in a sector that requires significant skill sets and significant management, and the CfAT is probably the appropriate place at this point in time to get this project underway,” he said.

Passionate about space exploration himself, Mr Fry said having a facility like this in Central Australia could help to inspire future scientists.

“Imagine in 10 years’ time if we're able to develop a scientist out of this as a result of this whole platform ... and they come from an Indigenous background,” he said. Eddie Fry: 'Imagine in ten years’ time if we're able to develop a scientist out of this.'
Indigenous Business Australia

Dr Sarah Pearce, director of the CSIRO Space and Research program, said having real-time data delivery for science research in Australia is “vitally important” for the sector.

“We really appreciate the efficiency that comes with being able to download the data directly to Australia.”

Ms Pearce said it is “critical that we have space ground stations in Australia”.

“We have a large landmass with remote areas which are really well suited to hosting this facility,” she said.

“It's an area as well where Australia can really contribute to the global space community.”