The Australian Hong Kong community are urging the Federal Government - and in particular Liberal MP Gladys Liu - to take stronger action after days of protests in Hong Kong.

Australia’s Foreign Affairs ministry has said it has flagged its concerns’ about China's controversial extradition bill but the local Hong Kong community wants more to be done.

"(It's) too neutral and does not reflect the seriousness of the issue," she said. A protester shouts next to policemen against the proposed amendments to extradition law in Hong Kong.
AP

"Australia supports the right of people to protest peacefully and to exercise their freedom of speech, and we urge all sides to show restraint and avoid violence," Foreign Affairs Minister Marise Payne said in a statement.

Statement on protests in Hong Kong:https://t.co/ATWKMufrU1

The Australian Hong Kong community has requested the support of Liberal MP Gladys Liu, the first Chinese woman elected to the lower house, who was born in Hong Kong.

She told SBS News: "we would like to see a peaceful way of expressing views from people and see government talking with people in a peaceful way".

When asked about her personal view on the situation, she said she hasn't been able to make a judgment.

Ms Poon said the community was "a bit disappointed" with the response from Ms Liu. 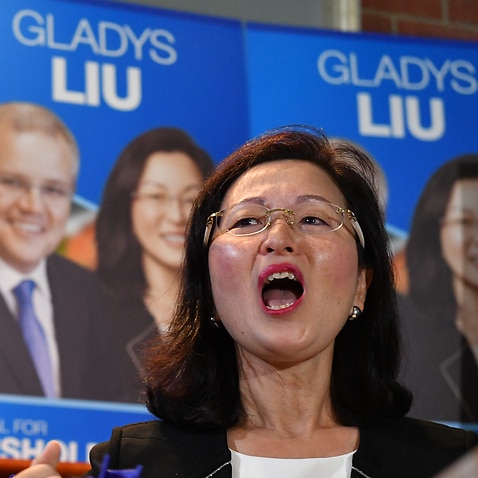 "We ask for her reply at the end of May, but we received nothing," she said.

"We believe she must share [the] same feeling as us because she is originally from HK, [she] must have relatives and  family in Hong Kong." Liberal for Chisholm Gladys Liu secured a majority for the Coalition.
AAP

Those from Hong Kong, who are living in Australia temporarily, fear there may be reprisal from the Chinese government if the bill is passed.

"I'm worried about being in the protest because who knows what the Chinese government will do, there is no rule of law in China," student protester Jacky Ng said.

Outside the Audi dealership in Admiralty, demonstrators say it's a rest day for them. They are restocking their supplies for coming days. #HongKong @SBSNews pic.twitter.com/FChV7bOhFQ

China researcher Graeme Smith from the Australian National University said Australia's response to Hong Kong,  compared other countries such as Canada and the United Kingdom, was "very subdued".

"One-third of our trade is with China so if there's anything driving it, and I can't say for sure, it's likely to be economic motivations," he said. A protester tries to convince police officers to stop using force against them.
SIPA USA/AAP

In 2017, the Turnbull government considered an extradition treaty with China, it collapsed after opposition from the Coalition backbench, Labor and crossbenchers.

Mr Smith said at the time there was not much outcry because Australians didn't understand the implications. From peaceful protests to tear gas: How the Hong Kong protests unfolded

Now they're gathering thousands of signatures in support of their cause, which they hope to hand deliver to the Prime Minister next week.