Questions are being asked about seafood imported by Australia from overseas.

Australian retailers are being urged to do more to ensure their imported seafood is not being produced by slave labour.

One of the report’s authors, University of Technology Sydney adjunct professor Trevor Ward, worked with companies to get them asking questions about the origins of their seafood.

“Our approach was that business and the private sector had a responsibility to do their share to correct slavery wherever it occurs,” he told SBS News. 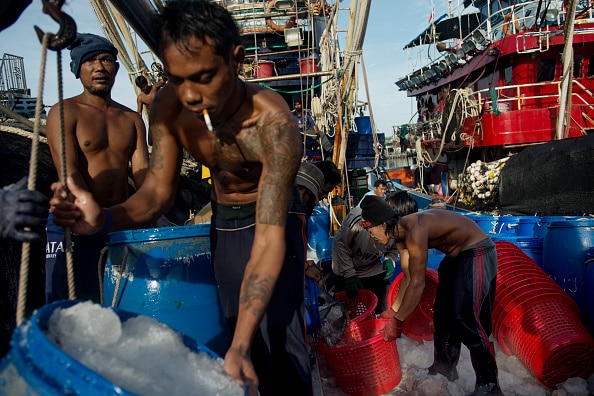 While stricter Australian laws and policing ensure Australian-made products are mostly free from the influence of slave labour, Thailand, Indonesia and China’s fishing industries are reported to be rife with forced labour – frequently using stateless or illegal workers who can’t complain to authorities about being forced to work as slaves in brutal conditions.

The Walk Free Foundation’s executive director of global research Fiona David said fishermen in those countries were often forced to work on ships for years at a time without pay, under the threat of violence.

“We have seen extreme examples of fishermen who have literally witnessed murders, been held captive on boats, been beaten,” she said.

“Given the human cruelty and human cost at stake, it’s critical we make every effort to practical develop tools that companies can use to ensure these risks are not making their ways into their supply chains.

“Not only do we have a modern slavery problem in our backyard, we’re importing products into our supermarkets that may have been produced by forced labour.”

Working with the  Seeing Slavery in Seafood Supply Chains report's authors, 18 global food companies examined their supply chains to determine if slave labour was potentially part of the fishing, producing or shipping processes.

Professor Ward said the team we moved to develop a set of tools "that would allow business to engage with human right organisations to develop the tools to identify forced labour in any particular supply line".

“They can ask their upstream supplier if their level has a risk of having forced labour associated with it. And if a company looks further upstream and asks the same question of their supplier, it ends up as an analysis that ends up facing the consumer eventually.” A migrant worker seen through a window of a fishing boat that is docked in Phuket.
Getty Images

He and his co-authors hope seafood companies, now armed with these tools, will do more to ensure they only buy from sources with proper labour practices.

The Walk Free Foundation, which aims to stamp out slavery by mobilising global activists, estimates 40 million people are held in slavery around the world on any given day – the UN International Labour Organisation defines forced labour or slavery as “work or service exacted from any person under the menace of penalty and for which the person has not offered himself voluntarily”. Unregulated labour brokers in countries such as Thailand and Indonesia also often target refugees and illegal immigrants from countries such as Myanmar, China, Indonesia, Vietnam, Cambodia, and Nepal, knowing they can’t complain to the authorities.

“The seafood industry is particularly unique – you have an industry that is out to sea, that people can literally not leave – you’re kept out at sea for months at a time, you literally cannot get off,” Ms David told SBS News.

“We are talking about seafood coming into supermarkets, tinned tuna that is going on Australian tables and frozen prawns we all use in our cooking.”

Industry group Seafood Industry Australia (SIA) used the release of the report to "remind consumers that no Australian fisheries are subject to modern-slavery".

In a statement, SIA CEO Jane Lovell said "SIA is not interested in vilifying imported seafood, many international fisheries operate to the same high-standard as Australia’s fisheries".

"But, if consumers are concerned by the research and want to be 100 per cent sure their seafood has been caught in a sustainable way, free from forced-labour then they should seek out Australian seafood," Ms Lovell said.

While businesses have the capacity to question suppliers about labour practices, the onus is also on the consumer. Professor Ward said, “when the consumers have the opportunity to ask the question “does my tuna come from a process depends on forced labour?” a company will be able to answer yes or no – it’s a process the consumers themselves will drive".

Consumers are urged to examine their seafood's country of origin - Australian farmed and grown is best, while products originating from countries with known human trafficking and slavery issues should be considered suspect.

The Federal government has committed $3.6 million to establish a modern slavery business engagement unit, which will advise Australian businesses on the best way to address slavery in their supply chains and operations.

The matter is now before a committee.