The Australian Council of Social Service says the levels of income support in 2020 lifted thousands of Australians out of poverty. 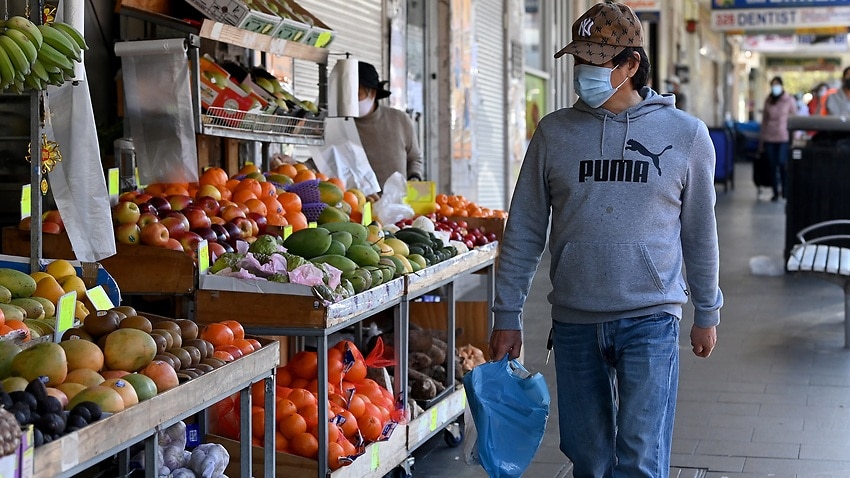 Members of the public wear face masks as they go about their daily lives in Bankstown, Sydney, Wednesday, September 8, 2021. Source: AAP

Australia’s peak social services body is calling for COVID-19 disaster payments to be extended and income support increased as the group releases new research showing the economic impact felt by the nation’s most disadvantaged communities.

The research, compiled by the Australian Council of Social Service (ACOSS) and the University of NSW's Sydney Poverty and Inequality Partnership, found that the overall number of people relying on income support like JobSeeker due to unemployment is 27 per cent higher in September 2021, compared to pre-pandemic levels.

The vast majority of those were not eligible for additional supports like the COVID-19 disaster payment, which was targeted at Australian residents in COVID-affected areas who had lost existing employment due to lockdowns.

The JobSeeker payment currently sits at $620.80 a fortnight, 41.2 per cent of the national minimum wage.

ACOSS warns the decision to taper disaster payments when states hit vaccination milestones and emerge from lockdown will leave those most vulnerable "locked into poverty" unless the JobSeeker payment is substantially increased.

CEO Dr Cassandra Goldie called on the government to keep the disaster payments going beyond the end of lockdown and to re-establish the robust income support made available in 2020.

"Unless we improve support now, income and social divides will fester across our major cities and outer urban areas," Dr Cassandra Goldie said.

During the first COVID-19 wave, reliance on income support peaked at 70 per cent – with the coronavirus supplement made available on top of the existing JobSeeker payments.

That and the JobKeeper payment have been credited with helping the economy and job market swiftly recover following the first wave and Australia’s first recession in two decades.

“In 2020, we showed we could respond to adversity with cooperation, by providing economic security to the vast majority. Last year average incomes actually rose, despite the deepest recession in almost a century,” Dr Goldie said.

“But this year is a starkly different story. COVID has left a scorched economic path particularly in areas that were more disadvantaged pre-pandemic.”

According to the research, the biggest rises in reliance on income support in 2021 were seen in west and southwest Sydney, regions which have been disproportionately impacted by the state’s coronavirus outbreak.

“Those areas were economically disadvantaged prior to COVID,” Professor Carla Treloar, director of the Social Policy Research Centre at UNSW, told SBS News.

"In west and southwest Sydney, there are continuing stay-at-home orders and restrictions on being able to move around for work. So that makes it harder for people who've already lost work, lost income to find additional ways to support themselves and their families.”

In Victoria, outer northwest and south-eastern suburbs in Melbourne bore the economic brunt.

In Queensland, the far north of the state and border regions south of Brisbane also saw increases of between 3,000 to 4,000 people receiving JobSeeker payments compared to 2019.

Northern Adelaide was the hardest hit region in South Australia. In the Northern Territory, Central Australia has seen an increase of 4,000 people rely on JobSeeker payments.

"Living on $45 a day on Newstart or Jobseeker is well below the poverty line," Professor Treloar said.

"So we risk creating further and service social and economic divides across our cities and across the country, because of the lack of support provided to people who … through no fault of their own, have lost work [or] have lost their job in 2021."

ACOSS has also called on the government to extend income support to all without adequate paid work, including temporary visa holders;  invest in social housing and re-introduce a ‘flexible national employment support scheme’, similar to the axed JobKeeper payment.