The Australia-founded International Campaign to Abolish Nuclear Weapons will accept the Nobel Peace Prize in Norway on Sunday.

An Australian-founded group of anti-nuclear campaigners will accept their Nobel Peace Prize alongside an 85-year-old Hiroshima survivor.

The International Campaign to Abolish Nuclear Weapons is the first Australian-founded Nobel Laureate for peace and will accept the prestigious award in Norway on Sunday.

Hiroshima survivor Setsuko Thurlow, who was 13 when the Japanese city was bombed, will accept the award with ICAN's executive director Beatrice Fihn. 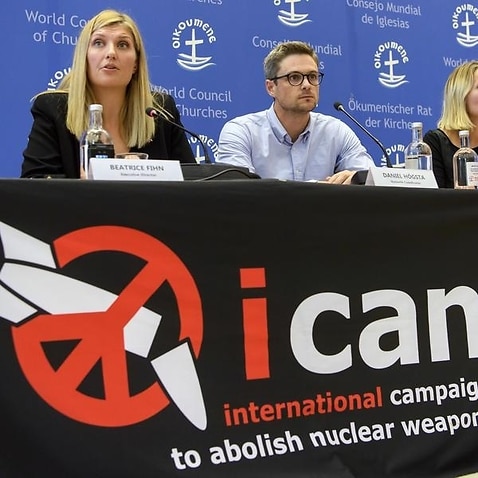 Ms Thurlow has been a leading figure for ICAN since the grassroots movement began in Melbourne's Carlton in 2007 with an aim to end the use of nuclear weapons.

Now headquartered in Geneva, ICAN is a non-governmental coalition that promotes the implementation and adherence of the Treaty on the Prohibition of Nuclear Weapons.

Comprising 468 partner organisations in 100 countries, it was awarded the Nobel Peace Prize in October for its work to end the threat of nuclear arms to humanity.

The 1945 bombing of Hiroshoma and Nagasaki remain the only times nuclear weapons have been used in war.

Ms Thurlow was rescued at Hiroshima from the rubble of a collapsed building about 1.8 kilometres from Ground Zero, the closest point to detonation.

Most of her classmates, who were in the same room, were burned alive by the bombing.

The ceremony will be celebrated in Australia with a live broadcast of the event at the Melbourne Town Hall.

Speakers at the Melbourne event will include Australian Greens Leader senator Richard Di Natale, Labor Senator Lisa Singh, and Karina and Rose Lester, daughters of the late elder Yami Lester who was blinded by British nuclear tests in the 1950s.