An Australian artist has defended one of his cartoons which depicts Serena Williams smashing her racket during the US Open final.

The cartoon is a spin on the moment Williams smashed her racket, which resulted in her second of three code violations as she was downed by Japan's Naomi Osaka 6-2 6-4.

The cartoon exaggerates Williams' anger and shows the tennis star jumping up and down on her racket, with a pacifier nearby.

In the background, a character depicting Osaka is told by the umpire: "Can you just let her win?".

JK Rowling picked up on the social media furore over the cartoon and said it reduced Ms Williams to "racist and sexist tropes".

Well done on reducing one of the greatest sportswomen alive to racist and sexist tropes and turning a second great sportswoman into a faceless prop. https://t.co/YOxVMuTXEC

Others on social media slammed the cartoon for being "offensive" and one user asked where the cartoon was when men "broke their rackets".

Where was this cartoon for all the men who have broken their rackets over the years?

WooooW. the stereotypes jumped OUT!
you even turned osaka into a white blonde woman to push your 'angry black woman agenda' https://t.co/LF6PI0ufQI

Did you mean for this to come off as racist as it does? Because it was a punch to the gut. Felt like I was looking at an archived cartoon from the 1930s. Wow.... just, yeah.... wow. Whatever point you were trying to make, you revealed a WHOLE LOT more about you, than Serena

This is so offensive.

The Herald Sun editor Damon Johnston backed the cartoon in response to criticism on social media.

“A champion tennis player had a mega tantrum on the world stage, and Mark’s cartoon depicted that," he was quoted on The Herald Sun.

“It had nothing to do with gender or race.”

Mr Knight said the cartoon was not about race, but about poor behaviour.

“I drew this cartoon Sunday night after seeing the US Open final, and seeing the world’s best tennis player have a tantrum and thought that was interesting,” he said.

“Three days before I had drawn a cartoon about Nick Kyrgios being led off by the ears, like you used to do with your children,” he added.

“The cartoon about Serena is about her poor behaviour on the day, not about race.”

Earlier on Monday, Mr Knight hit back and denied the cartoon was about "gender," claiming he drew a cartoon earlier in the tournament depicting Australian star Nick Kyrgios "behaving badly".

Well Julie here’s a cartoon I drew a few days before when Australian male tennis player Kyrgios at the US Open was behaving badly. Don’t bring gender into it when it’s all about behaviour. I’ll accept your apology in writing😁 pic.twitter.com/NLV0AjPGsY

Williams, a six-time US Open champion, has since been fined $17,000 by the United States Tennis Association for the violations.

In the wake of Osaka's triumph, there were messages of support for Williams as well as those condemning her behaviour and agreeing with the umpire's calls. 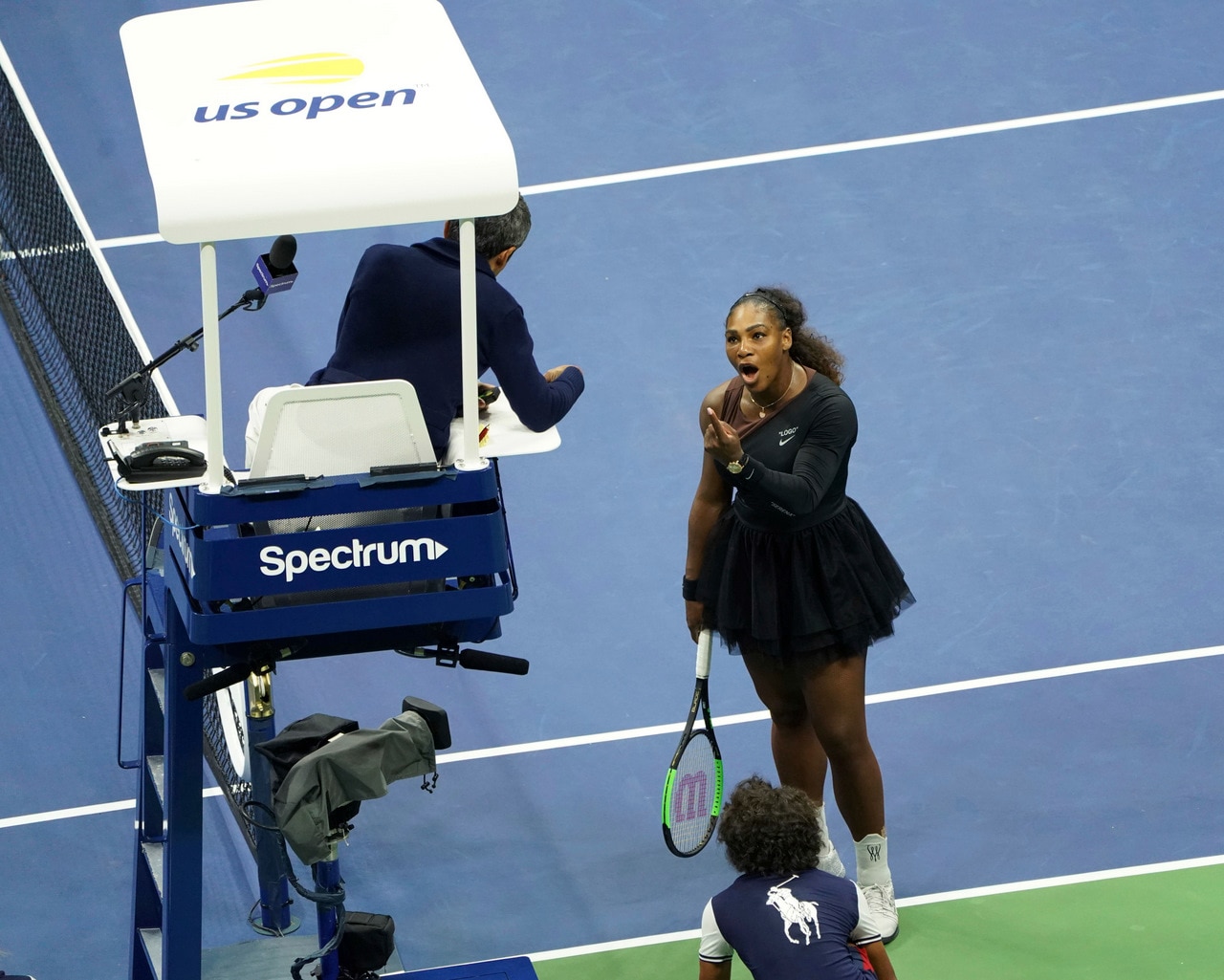 Serena Williams argues with chair umpire Carlos Ramos over his decision to deduct a game.
AAP

Billie Jean King said there is a clear double standard in the way the rules are applied to women and men.

“When a woman is emotional, she's 'hysterical' and she's penalized for it,” she said in a message posted on Twitter, adding that if a male had a similar outburst, there would be no penalty.

(1/2) Several things went very wrong during the @usopen Women’s Finals today. Coaching on every point should be allowed in tennis. It isn’t, and as a result, a player was penalized for the actions of her coach. This should not happen.

(2/2) When a woman is emotional, she’s “hysterical” and she’s penalized for it. When a man does the same, he’s “outspoken” & and there are no repercussions. Thank you, @serenawilliams, for calling out this double standard. More voices are needed to do the same.