A photo of a kangaroo hopping in front of a wall of bright orange flames on the NSW South Coast has captured the attention of Britain's media.

A week after they were treated to a glitzy $15 million tourism ad urging them to travel Down Under, Brits are today waking up to a very different image of Australia.

Across Britain's newspaper front pages, one photo proved popular on Thursday: the silhouette of a kangaroo against a wall of bright orange flames in Conjola on the NSW South Coast.

🦘 The same photo of a kangaroo leaping in front of bushfire dominates the front pages of some of Britain's newspapers for Thursday 2 January, 2020.#AustraliaBurns #AustraliaFires #Auspol
Images by @hendopolis pic.twitter.com/51TAbV0l3H

Snapped by Sydney-based photographer Matthew Abbott for the New York Times on New Year's Eve, the photo has symbolised for many the tragic loss of wildlife across the country during this year's horror fire season.

"Been covering the Australian bushfires for the last six weeks, but haven't seen anything like yesterday's fire that decimated the town of Conjola, NSW," Abbott wrote on Twitter alongside the haunting image on Wednesday.

As of Thursday evening, the tweet had been retweeted 8,000 times.

My last day of the decade felt like the apocalypse. Been covering the Australian bushfires for the last 6 weeks, but haven’t seen anything like yesterdays fire that decimated the town of Conjola, NSW. #bushfirecrisis #AustralianBushfires #NSWisburning work for @nytimes pic.twitter.com/KmVKqDMKsf

The Daily Telegraph, The Guardian UK, The Times and Financial Times all published the image, with the accompanying Guardian headline reading: "Australia burns as debate rages over PM's climate change stance".

Last week the Australian government was lampooned on social media for its latest tourism marketing campaign, which featured Kylie Minogue singing a musical tribute to quokkas, the beach and sausage sandwiches amid many idyllic Australian landscapes. 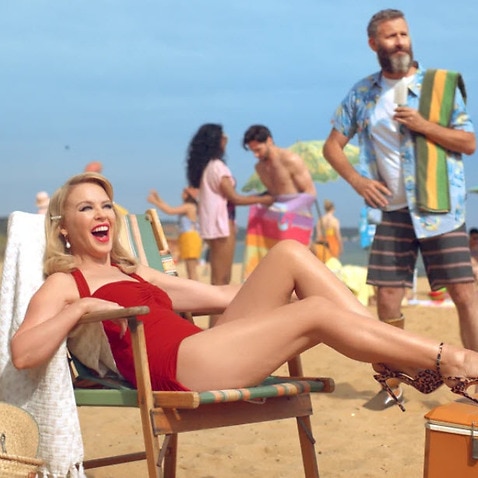 "C'mon over mates, we are having a barbie. The whole country is cooking in fact," one Twitter user posted in response to the video, which by Thursday evening had amassed more than 20,000 likes on the platform.

"Come on down! Just BYO water, breathing apparatus and SPF 5000," wrote another.