The video of the Australian Hazara man was shared widely on social media after being posted on Wednesday. 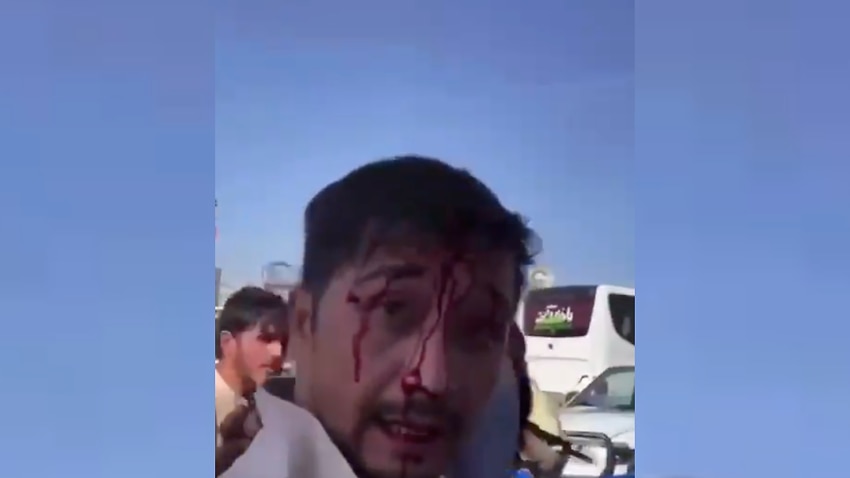 A screenshot from the viral video Source: Supplied

An Australian citizen who has appeared in a viral video with a bloodied head appealing for help in Kabul is in hiding after being captured by the Taliban, those close to him say.

While they say he has been released from Taliban custody, there are concerns he remains "in grave danger".

In the video circulating widely online, the man, who SBS News has decided not to identify by name for security reasons, has blood streaming down his face and says to the camera: “They hit me, I’m an Australian citizen”.

The Australian, from the persecuted Hazara ethnic minority group, is surrounded by a number of men, one of whom has a machine gun in his hand.

One of the men nearby, speaking in Dari, demands the Australian stop filming.

“Turn it off, turn it off!” the man orders him.

“I’m Australian, I’m not an Afghan, and they’re hitting me,” the Australian man tells the camera in Dari.

“See this happen to me when I was crossing … airport (sic),” he continues in English.

The sound of a gun being cocked can then be heard in the video before the man cries out.

A gunshot and then a woman’s cry follows before the video stops.

One close family member of the Australian told SBS News on Wednesday night they were not aware of the incident until they were alerted by a relative who’d seen the video on Facebook.

Another family member said they had not heard from the Australian for hours. They believed he had been taken by Taliban fighters based on conversations they had with five other relatives who had been accompanying him to the airport.

On Thursday morning, the family member said the Australian had been released by the Taliban after appeals from relatives but prevented from going to the airport.

A member from the Australian Hazara community who said he had been in touch with the man said he was assaulted by Taliban fighters at a checkpoint at the airport.

The man is now in hiding because the viral video means he is clearly identifiable to Taliban fighters if he tries to head to the airport again.

“He is in grave danger,” the community member told SBS News on Thursday morning.

When asked about the man’s case by reporters in Canberra on Thursday, Prime Minister Scott Morrison said he could not go into details.

“Providing specific responses on individual cases is not helpful to individuals,” he said.

Mr Morrison added the National Security Committee had been discussing the situation at Kabul airport daily.

“Many actions have been taken,” he said.

"I can assure you, anywhere we have been able to make it possible to get people out, we have been doing that.”

SBS News has sought comment from the Australian Federal Police and Department of Foreign Affairs and Trade.

Dozens of Australians and Australian visa-holders remain trapped at Kabul airport amid fresh advice issued Wednesday from DFAT telling them not to travel to the airport.

The SmartTraveller advice has been updated with a new and clear warning saying “do not travel to Kabul International Airport”.

Until now, the advice for Australians and Afghans with visas was to travel to the airport and wait for an evacuation flight.

Those who’ve already made the perilous journey are now being instructed to “move to a safe location”.

Afghan civilians who have Australian visas and have been trying to reach planes at the airport are now swapping information suggesting they are being blocked by the Taliban.

One of those messages, seen by SBS News, warns that only foreigners are being allowed to get through.