The Hong Kong Police Force is trying to recruit in Australia. The job on the UNSW Learning and Careers site.
Australia-Hong Kong Link

Advocacy group Australia-Hong Kong Link then spearheaded a campaign to pressure universities not to associate with the region's police force after their allegedly heavy-handed response to pro-democracy demonstrations over the past year.

Australia-Hong Kong Link representative and university student Dennis Chan* told SBS News the organisation was an "unethical employer" due to their use of disproportionate force.

"It's not proper for them to recruit people in Australia ... because [recruits] will likely harm human rights," he said. Riot police detain a group of people during an demonstration in Mongkok district last week.
Getty

A spokesperson for UTS confirmed to SBS News the advertisement was removed on Thursday.

The ad also appears to have been taken down from the UNSW site, but the university would not provide comment on when or why this was done.

The University of Melbourne has decided to keep the posting online.

"The student careers website is used by employers to post job advertisements for students at the University of Melbourne. These include job advertisements, like the one posted by the Hong Kong Police Force, which may interest international students who are considering returning home after they complete their studies," a university spokesperson said. 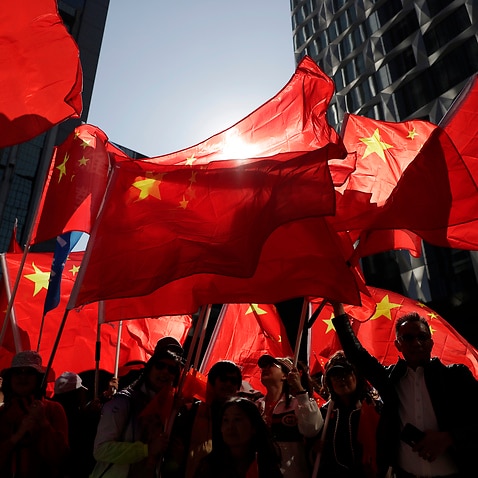 Under the title of "probationary inspector", the advertised role involves "maintain[ing] law and order, prevent[ing] and investigat[ing] crimes as well as responding[ing] to emergency situations".

Australia-Hong Kong Link claims that since the protests started in Hong Kong, the number of people who applied for the police force at all levels has dropped by half.

The group was founded in 2014 in solidarity with pro-democracy protesters in Hong Kong. 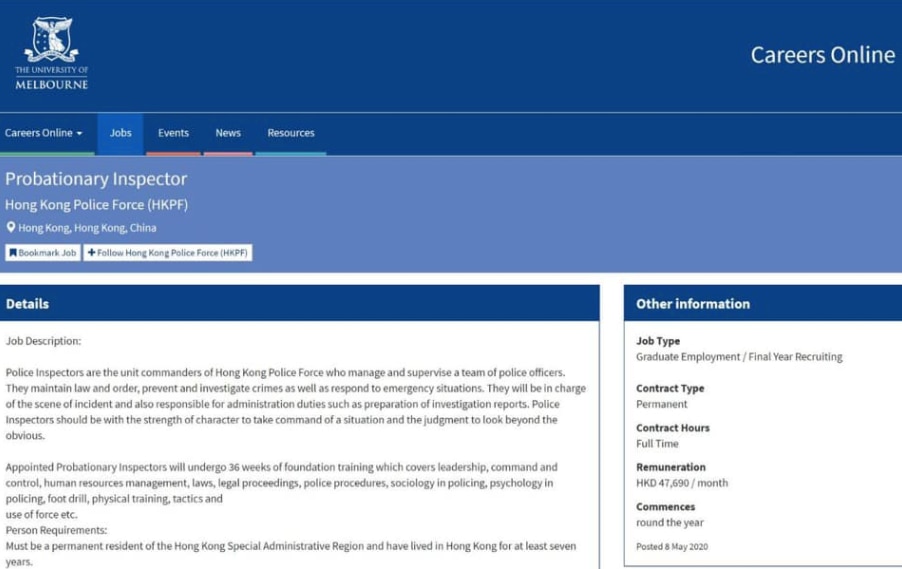 The job ad is still on the University of Melbourne site.
Australia-Hong Kong Link

On Friday, Hong Kong's police watchdog exonerated officers for their handling of the pro-democracy protests, concluding that public anger towards the city's force was the result of online smear campaigns.

The report by the Independent Police Complaints Council (IPCC) into the protests said accusations of brutality against police had become "a weapon of political protest" and cleared the force of any major wrongdoing.

"The protests have been driven and continue to be driven by a consistent and continuing message of hatred against the police, repeated particularly on the internet," the report authors wrote.

Police have repeatedly said they were reactive and exercised restraint in the face of high levels of violence. But the IPCC findings are unlikely to satisfy protesters, who have dismissed the watchdog as a toothless organisation and made an independent judge-led inquiry into the police force one of their core demands.

Amnesty International claimed there was an "alarming pattern of the Hong Kong Police Force deploying reckless and indiscriminate tactics" at protests, as well as "retaliatory violence against arrested persons in custody, some of which has amounted to torture".

Hong Kong was battered by months of large-scale pro-democracy protests that upended the city's reputation for stability and left it deeply polarised.

The protests were initially sparked by a now-scrapped bill to allow extraditions to China's party-controlled courts.

But they soon snowballed into a popular revolt against Beijing's rule after years of rising fears that the city's freedoms were slipping away.