After living in Australia for seven years, the Lund family was refused permanent residency and given 35 days to leave Australia because of 16-year-old Ciaran Lund’s healthcare needs.

A British family of five who were told they wouldn’t be able to stay in Australia because one child's health needs would cost taxpayers too much is celebrating after the decision was overturned.

The Lunds moved to Sydney's northern beaches from the northern English city of Sheffield on a 457 visa after dad Jason landed a contract with the New South Wales government in 2013.

But their application for permanent residency was refused five years later by the Department of Home Affairs because one of their three children, Ciaran, has Down syndrome.

The 16-year-old’s future healthcare needs were valued at a cost of more than $2 million to the Australian taxpayer, meaning he failed the government’s migration health requirement and rendered the entire family ineligible to stay. 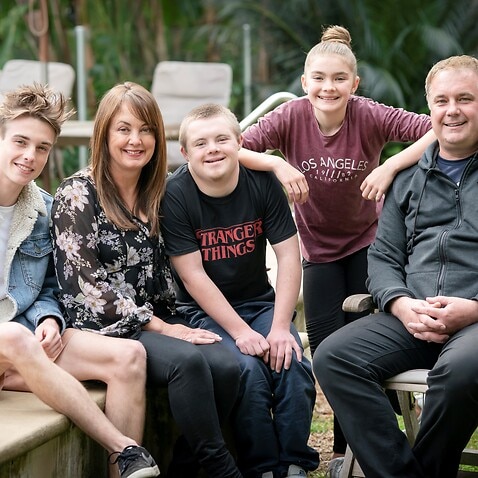 But last week, the Administrative Appeals Tribunal (AAT) overturned the decision and they will likely get their permanent residency within a couple of months.

“Tears of joy,” Anita, 49, added. “I thought [migration agent] Aleks was calling to say we’d got an appeal date and she said, ‘today’s going to be a good day’.”

The couple told their three children one by one before celebrating with some champagne.

“Ciaran seemed happy about it, in his own usual way,” Jason said. “We had a big cuddle,” Anita added. The family’s migration agent and lawyer Aleksandra Rajcevic said their appeal set out to show Ciaran wouldn’t be a “burden on the system and that he has a lot to offer the country”.

“They will likely get their permanent visa now because the tribunal has requested the decision be reviewed by the department and with new directions. It’s a win for the family. Ciaran meets the criteria for the granting of the visa,” she said.

They’ll have some time to let the news sink in while on a family holiday on the NSW Central Coast this week and will later host a party for everyone who has supported them during their visa battle.

Their story will also feature in the SBS documentary series, Who Gets To Stay In Australia?, on Wednesday, which follows the lives of 13 migrants and their families who want to settle in the country. The family hope to get their visas within a couple of months.
SBS

Ms Rajcevic said it was difficult to put a figure on the number of cases which are overturned by the AAT and that if the family was unsuccessful at appeal the only option for them to stay would have been ministerial intervention.

Jason said while they are relieved about the result, he does feel upset about the impact the process has had on his family.

“It still feels quite raw,” he said. “I felt like we've been waiting four-and-a-half years, and then to get a ‘yes’, I thought, ‘couldn’t we have done this years ago?'

“I think the government needs to review the rules around immigration, and modernise ... get with the program.” The family is planning a party to celebrate the news.
Supplied

More than 25,000 applications for permanent residency are refused each year but it’s unclear how many of them are on health grounds.

An applicant's projected healthcare costs are assessed over a 10-year period with the maximum threshold increased from $40,000 to $49,000 last year. The Department of Home Affairs does not comment on individual cases. A spokesperson previously told SBS News the department “does not discriminate against applicants who have a health condition, disability or illness, or a combination, with all applicants being treated in an equal and fair manner”.

The Lunds’ story will feature on Who Gets To Stay In Australia? at 8.30pm Wednesday 15 July on SBS and will be available afterwards at SBS On Demand.