Australians and permanent residents stranded abroad are calling on the federal government to reconsider plans to cap international flights.

Australian citizens and permanent residents stranded overseas have warned against slowing the number of incoming travellers into Australia to ease the burden on hotel quarantine.

Prime Minister Scott Morrison will discuss the possibility of capping international flights with state and territory leaders in national cabinet on Friday.

But many of those abroad who have been unable to return home have pleaded with the federal government to reconsider the proposal. Ms Nikhanj is concerned plans to reduce the number of international flights could further delay her return to Australia.
Supplied

34-year-old Saakshi Nikhanj said repeated attempts to fly from India to Australia with her one-year-old son have been cancelled by airlines.

The permanent resident has been living in lockdown in the Indian city of Chandigarh since travelling there in February, and has been separated from her husband and five-year-old son in Melbourne.

Ms Nikhanj said she is worried a reunion with her family could now face even further delays.

“We are just totally shattered by all of this – aren’t we equal?” she told SBS News.

“We are your people – it doesn’t make sense.” 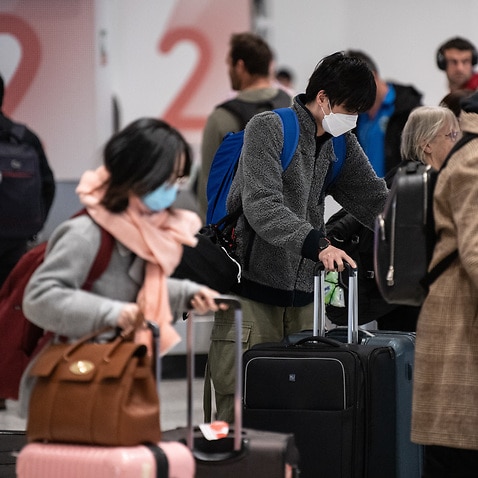 International travel into Melbourne has been suspended as coronavirus infections rise, casting doubt over a return flight secured by Ms Nikhanj and her son, who is an Australian citizen, scheduled for 17 July.

“Have a heart and let us enter without further delay,” Ms Nikhanj said.

States have urged the federal government to reduce the pace of international arrivals as hotel capacity for quarantine is stretched.

Capital cities are struggling to cope with rising numbers of passengers, who must spend two weeks in hotel isolation.

Prime Minister Scott Morrison has said he will be taking a proposal to slow the number of incoming travellers to national cabinet on Friday. But a petition signed by more than 1,200 people has urged the government to rethink the possibility of flight restrictions, saying those stranded overseas are already confronting a steep challenge to return.

Many returning travellers have been trapped in lockdown conditions and faced hikes in flight costs because of coronavirus border restrictions. Petition organiser Kim Parry with his partner and step-son.
Supplied

Petition organiser Kim Parry, who recently returned from the Philippines, is currently undertaking 14 days of quarantine in Sydney.

The Australian primary school teacher had been working in San Fernando outside Manilla and was forced to leave behind his Philippine partner of five years and step-son to return to Australia.

“Everyone has the idea that we have all had time to get home and we’re all just coming back from our two-week vacation in Bali – it’s not true,” he said.

“It’s heartbreaking what’s happened – it’s just hard for us when our own government has put another hurdle in our way.”

'It is the government's responsibility to take care of their citizens'

For those separated from loved ones - like Australian citizen Pavan Kumar in Sydney - the prospect of further delays is difficult to comprehend.

His wife Lakshmi and their one-year-old son were scheduled to fly home from India in February, after the family had visited the country together over Christmas. Pavan Kumar with his wife Lakshmi and their son.
Supplied

“They are desperate to get back home. We own a home here. We live here. But now the sad reality is they can’t get back,” he told SBS News.

“It is the government’s responsibility to take their citizens.”

Permanent resident Rajveer Kaur has also tried to return from India but has been plagued by flight delays.

Ms Kaur said she was desperate to return to Australia with her husband and six-year-old son.

“We are all stuck here – we are really mentally stressed,” she said.

“What will we do… they are putting us in hotel quarantine so why are they limiting us?” Rajveen Kaur with her husband and their son.
Supplied

More than 28,000 international passengers arrived in Australia in the month to 7 July, according to federal government data with more than half landing in NSW.

The nation's chief medical officers have been asked to investigate the hotel quarantine system after major failures in Melbourne fanned dozens of new infections.

Deputy Chief Medical Officer Nick Coatsworth said managing the number of arrivals to Australia was a logical response given the recent outbreak in Victoria.

“When we are focusing on containing this outbreak, it is right and proper for us to consider the volumes of people coming in from overseas,” he said. How long will Australians have to wait to travel overseas again?

Queensland is currently the only state charging travellers for their mandatory-two week quarantine period at a cost of $2,800 for one adult.

“I won’t be charging NSW residents ahead of charging those overseas returning travellers who have had plenty of time to get back to Australia,” she said.

The Victorian government has requested international arrivals be diverted away from Melbourne while it manages an ongoing rise in cases.

Australians and permanent residents are permitted to travel to Australia despite the nation's international travel restrictions.