The federal budget has forecast international borders will remain closed until next year, leaving some Australians distressed they will have to wait even longer to reunite with family overseas.

Australians with family and loved ones overseas have expressed dismay after the federal budget revealed international borders could remain shut until the middle of next year.

The projection means the many Australians with personal connections abroad face the prospect of up to 12 months further separation, after more than a year of the travel ban already being in place.

In March of last year, Prime Minister Scott Morrison announced international borders would be shut to everyone except Australians citizens and permanent residents to guard against the spread of the coronavirus. The federal budget reveals Treasury's forecast that the nation's borders are expected to reopen "gradually" over 2022 - with temporary and permanent migration expected to resume from the middle of next year.

But for Valeria Greenfield, the prospect of further time separated from her parents in Peru during the coronavirus pandemic is agonising.

"I have depression thinking of the fear that my parents are going to die at anytime [and] they never meet their grandchild," she told SBS News. Valeria hoped her parents in Peru could come and help her raise her daughter.
Catalina Florez/SBS News

Ms Greenfield has lived in Australia for almost 12 years and became an Australian citizen five years ago. Since the arrival of her fist child in March last year, she has looked forward to the support her parents could provide.

She says the time separated from her family has exacted a mental toll - only made worse by the likelihood of this extending into next year. Under Australia's COVID-19 travel ban, only the "immediate family" of an Australian citizen or permanent resident is allowed to enter the country - but parents aren't considered immediate family.

This means Ms Greenfield's parents Emma and Julio Vega have been unable to meet their granddaughter in person.

Treasurer Josh Frydenberg says a decision on reopening borders remains under consideration and will be made based on medical advice.

"That is an assumption in the budget - it is not a policy decision," he told SBS News on budget night.

"We will open the borders when it is safe to do so. We are rolling out the coronavirus vaccine as quickly as possible but we also have to be mindful of the international circumstances with respect to the virus." In relation to the coronavirus vaccine rollout, the federal budget also makes the assumption in the budget that a population-wide program will be in place by the end of 2021.

However, Prime Minister Scott Morrison has likewise stressed this assumption is not a policy commitment.

“That is not a policy statement nor is it a policy commitment of the government,” Mr Morrison told parliament on Wednesday. Labor has accused the government of incompetence over the pace of the vaccine rollout and its management of quarantine.

"This has been a shambles from the beginning. All of this over promising and underdelivering," Shadow Treasurer Jim Chalmers told reporters on Wednesday.

The federal budget outlined no new funds for purpose-built quarantine facilities like one recently proposed in Victoria - beyond an already announced expansion at Howard Springs in the Northern Territory.

Mother says she dreams of reuniting with son

Rajshree Patel has been separated from her three-year-old son for almost 20 months, since the toddler travelled to India to be with his grandparents while she finished her Bachelor of Nursing.

Ms Patel, 31, who came to Australia eight years ago, became a citizen in 2018 and has worked at a COVID-19 testing clinic in Sydney during the pandemic. Ms Patel and her son are both Australian citizens but remain apart.
Supplied/Rajshree Patel

Her son Nevaan was born in Australia and is an Australian citizen but is not old enough to fly alone.

Ms Patel says the Australian government has previously granted her mother an exemption to travel to Australia but the family is concerned about splitting up the family.

She said the possibility of the family's reunification being further delayed is distressing.

"I feel like it is a dream to see my son and hold him," she told SBS News. 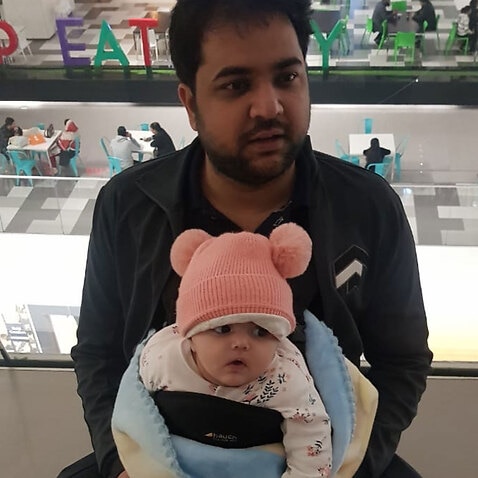 Ms Patel also expressed frustration that foreign celebrities and sports players had been granted exemptions to get into the country, while she remains separated from her parents.

Treasury estimates suggest it will take at least another two years for it to return to pre-pandemic levels. Gordon Chan has been separated from his fiancee Svetlana Chernykh in Russia for around 14 months, with the pair unable to reunite using a prospective marriage visa during the pandemic.

"It has been completely heartbreaking," he told SBS News.

Mr Chan has now received an exemption from the government to travel to Russia, but his partner does not have a similar exemption to come to Australia.

“I have got no other option than to go overseas in an unknown COVID environment with just my life savings in hand and try to live with my fiancée,” he said.

“My other option is to not go overseas – let my exemption expire - and not see my fiancée until next year sometime - how is that right?”