As anger continues to mount in Belarus following last weekend's disputed election, the prime ministers of Estonia, Latvia and Lithuania are calling for a fresh vote.

The prime ministers of Estonia, Latvia and Lithuania have called on Belarus to conduct new "free and fair" elections as protests swell against President Alexander Lukashenko's disputed poll victory.

A new vote should be held transparently with the participation of international observers, the leaders said in a statement after meeting in Estonia on Saturday.

Mr Lukashenko's claimed landslide re-election victory last Sunday has been branded a fraud by protesters, and the European Union took the first step on Friday towards imposing new sanctions on Belarus over it.

Opposition presidential candidate Sviatlana Tsikhanouskaya, who fled to neighbouring Lithuania early on Tuesday, has called for more protests and an election recount.

The Baltic leaders urged Belarus to refrain from violence and release political prisoners and detained protesters.

Australia has also voiced concern about the situation in Belarus.

“Australia supports all peoples’ right to assemble and protest peacefully. We are concerned about the use of violence against protestors exercising their democratic freedoms in Belarus,” a Department of Foreign Affairs and Trade spokesperson said in a statement to SBS News on Saturday.

“We call for an end to any further violence and for the fundamental human rights of the Belarusian people to be respected.”

Mr Lukashenko had said earlier on Saturday he wanted to speak to Mr Putin, warning the protests in Minsk were not just a threat to his country.

A large crowd also formed near the Pushkinskaya metro station in Minsk on Saturday in honour of a protester who died there during this week's police crackdown on demonstrators.

Demonstrators laid flowers at the site where Alexander Taraikovsky, 34, died on Monday during clashes between protesters and police.

Many chanted "leave!" and some held pictures of protesters with severe bruises after accounts emerged of detained demonstrators being beaten and tortured. Others carried signs reading "no to violence" and "no more torture". 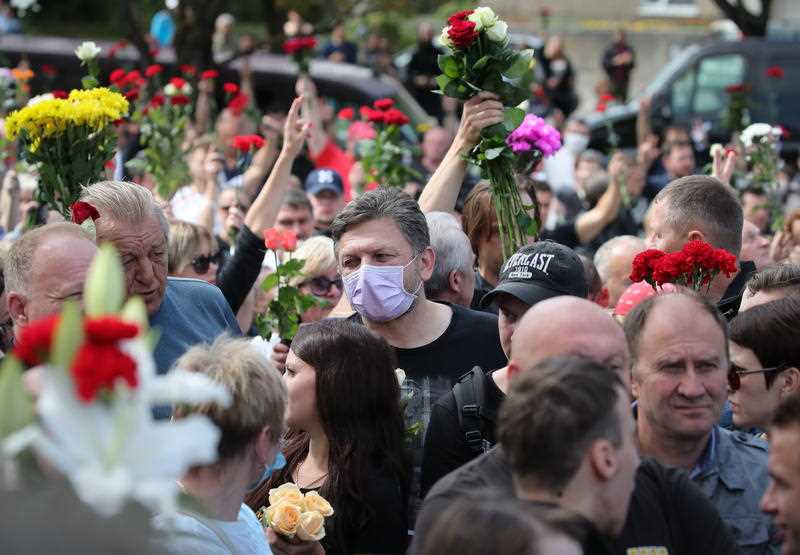 More than 6,700 people were arrested in the crackdown and hundreds were injured.

Officials have confirmed two deaths in the unrest, including Mr Taraikovsky, who they say died when an explosive device went off in his hand during a protest, and another man who died in custody after being arrested in the southeastern city of Gomel.

Mr Taraikovsky's funeral was being held on Saturday and a "March for Freedom" is planned in central Minsk on Sunday.