Barnaby Joyce has resigned as the leader of the Nationals and deputy prime minister of Australia to sit on the government's backbench.

Barnaby Joyce has resigned as Nationals leader amid public criticism from colleagues despite insisting he was "not going anywhere" earlier in the week.

Mr Joyce announced his exit from the Turnbull cabinet at a Friday afternoon press conference in Armidale after two Nationals colleagues expressed doubts over the viability of his leadership.

"This current cacophony of issues has to be set aside," Mr Joyce said.

"On Monday morning at the party room, I will step down as the leader of the National Party and deputy leader of Australia.

"I have informed the acting Prime Minister, Mathias Cormann, of this. I informed my colleagues of this and there are a couple of things I would like to say." Joyce's leadership in doubt as Nationals MPs turn their backs

Mr Joyce said he was "humbled" by the support he had received from his constituents of New England.

"Today, whilst walking around Armidale, there were people - I don't want to be so bold, but I got a sneaking suspicion some of them didn't vote for me - but they were so good at offering their support," he said.

"The people of Tamworth, the same, the people in the small towns... People literally running up, and some crying, and offering their support to me. I just say, I don't deserve the support that you've given me."

Mr Joyce said the circus surrounding the fallout of his affair with former media adviser Vikki Campion needed to stop.

"It's incredibly important that there be a circuit breaker, not just for the parliament, but more importantly, a circuit-breaker for Vikki, for my unborn child, my daughters and for [estranged wife] Nat," he said.

"This has got to stop. It's not fair on them. It's just completely and utterly unwarranted, the sort of observation that's happened. 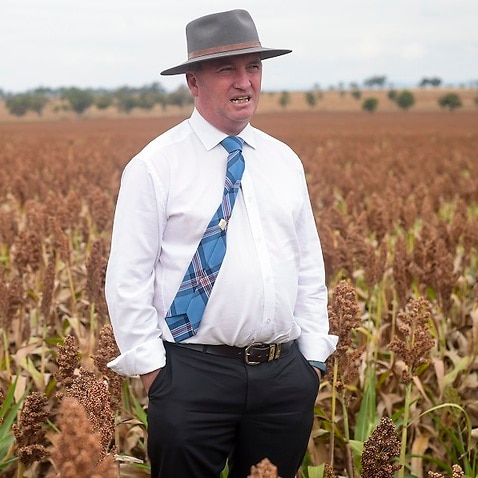 The move to the backbench will see Mr Joyce lose the infrastructure and transport ministry and his salary of more than $400,000. But he will still be paid about $200,000 as a regular member of parliament.

Prime Minister Malcolm Turnbull, who is still in Washington ahead of talks with US president Donald Trump, released a statement thanking Mr Joyce for his time in office.

"I thank Barnaby for his service as deputy prime minister and in his various ministerial roles in which he has been a fierce advocate for rural and regional Australia," Mr Turnbull's statement reads.

Following Mr Joyce's press conference, Mr Shorten said the relationship between the Liberals and the Nationals was "fundamentally damaged".

"The deputy prime minister didn't ring the prime minister to tell him he was going to resign shows you the fictional make-up they had last weekend was just a hoax," the opposition leader said.

"They both said after their meeting last Saturday that everything was fine. They were clearly lying and now the fact that the deputy prime minister has resigned and not even told the prime minister shows you there is deep division at the heart of this chaotic government."

He said his support would depend on the results of an ongoing National Party investigation into a new sexual harassment allegation against Mr Joyce, which acting prime minister Mathias Cormann described as "very serious".

Mr Joyce strongly denies the harassment allegations, reportedly from a West Australian woman, and has called them "spurious and defamatory", but said the latest accusation was the "straw that broke the camel's back".

He said he did not believe any of the "litany of allegations" against him had been substantiated.

The Nationals were set to discuss the leadership crisis at a much-anticipated party room meeting on Monday next week, when Malcolm Turnbull is due back from his tour of the United States and parliament is due to resume.

The resignation comes after another Nationals MP, Andrew Broad, openly called on Mr Joyce to quit.

"At this point in time he should take a step back and stand down and be on the back bench," Mr Broad told ABC Radio on Thursday.

Mr Joyce said he "won't snipe" at the future Nationals leader from the backbench.

He said he would continue to represent the people of his New England electorate, and revealed he was "in the process of writing a book" about regional Australians.

Several of Mr Joyce's supporters in the Nationals expressed their appreciation for their former leader. Senator Matt Canavan crediting Mr Joyce with pulling the Nationals "back from the grave".

Deputy Nationals leader Bridget McKenzie released a statement saying there was "no stronger advocate for regional Australia". She did not comment on the future leadership of the party.

The resignation follows weeks of intense media and political pressure over Mr Joyce's affair with former staffer Ms Campion, who is now his partner. The scandal has dominated Australian politics for more than a fortnight, since photographs of the now-pregnant Ms Campion were splashed on the front pages of the Daily Telegraph.

Mr Joyce has been on personal leave for one week, with Mr Turnbull encouraging his deputy to "consider" his future.

Last week the prime minister also ordered a new ban on ministers in his government having "sexual relations" with their staff and accused Mr Joyce of a "shocking error of judgement" for his affair with a younger employee.

That sparked a bitter war of words between the leaders of the two Coalition parties. Mr Joyce called the prime minister's comments "inept" and "unnecessary".

In a newspaper interview earlier this week, Mr Joyce said he would not be pushed from the leadership. "People are starting to see this as a witch-hunt," he told Fairfax Media. "I’m not going anywhere, I never would."

Nationals MP David Gillespie said he would challenge for the leadership.

“Our leader is under enormous pressure, there is a lot of issues he has to work through and if he were to step down, people would ask me if I would put my hand up and yes I would," he said.

Mr Joyce was reluctant to resign over the affair and insisted he never broke any ministerial rules. Last week he told a party room meeting he was "determined to work through this".

Mr Joyce has apologised to his estranged wife Natalie, to whom he was married for 24 years, and their four daughters for “all the hurt” of the affair.

Ms Campion is expecting a child with Mr Joyce in April.