Prime Minister Malcolm Turnbull was among those who gathered in Israel on Tuesday for the centenary of the Battle of Beersheba.

"Forward march!" comes the command in an unmistakable Australian accent.

The order is met immediately, with the equally unique Australian enthusiasm the locals here have come to expect.

Even after all these years, the Aussie larrikin is the stuff of local legend. It has been a century to the day since the last visit from an army of khaki clad, slouch hat-wearing ANZACs, marching purposefully towards the town of Beersheba.

Today, for loved ones of those who saddled up in these very same fields, it is proving far more complex and emotional: Remembrance.

"Shalom! Toda raba!" locals shout as the horses' hooves kick up the fine yellow sand, carried across the landscape of palms and cactus by the warm October breeze.

"G'day!" they shout back from their saddles with a smile and a wave.

"Good day! Mates!" the children giggle back, as they proudly wave their Israeli and Australian flags. It's all a little surreal.

We're here, but none of us can quite begin to imagine what it must have been like all those years ago, when the order was given to seize the strategic trenches of Beersheba.

Win those water wells - and win the war.

And that's exactly what those baby-faced Australian Light Horse troopers did.

A real pleasure to meet the descendants of Australians who fought in #beersheba and have travelled here to pay their respects @SBSNews pic.twitter.com/11gjms69Ea

Trish’s grandfather Hugh survived. His mate - and Lyle’s Great Uncle, George - didn’t. 100yrs on their families have met for the first time. pic.twitter.com/w6cBcXjaQC

“We wish that this visit will be very influential, and strategic, and friendly” the Minister told journalists. Indigenous descendants to commemorate 100th anniversary of Battle of Beersheba

On Tuesday their descendants – some of whom they had never met - will ride into the same town where 31 of those diggers are buried to recreate the world's last great cavalry charge and the ANZAC's first taste of victory.

"We're painting a picture each day of what the journey was like so they know that in three days time they're marching into history," Sergeant Ricky Morris said.

One hundred years ago, his grandfather Frederick Amos Lovett saddled up his horse in the very same paddock, one of five brothers to enlist in the First World War.

Gunditjmara people from the Lake Condah district in Victoria, 21 members of the Lovett family have served in uniform in every Australian theatre of war.

"I served in East Timor and Afghanistan and, ironically, I joined the 4th/19th Prince of Wales' Light Horse, so, the very same unit as my grandfather, some 80 years later." Pastor Ray Minniecon is riding in memory of his grandfather James Lingwoodock, who fought for a country that failed to recognise him as a citizen. (Brett Mason)
SBS

Kabi Kabi man Pastor Ray Minniecon's grandfather James Lingwoodock fought in the Battle of Beersheba too, long before he was recognised as an Australian citizen.

"As Indigenous descendants we're especially proud to be here - our ancestors fought with their ancestors and bullets don't discriminate," Mr Minniecon said.

"They weren't discriminated against here, but when they went home that's when the discrimination started.

"And they had another big, big battle back home."

This herd of horses is stirring up more than just the desert dust. "I think the Battle of Beersheba should be the cornerstone of our Australia identity, replacing Gallipoli.

"Gallipoli was a British-led defeat. Beersheba was an Australian-led victory." 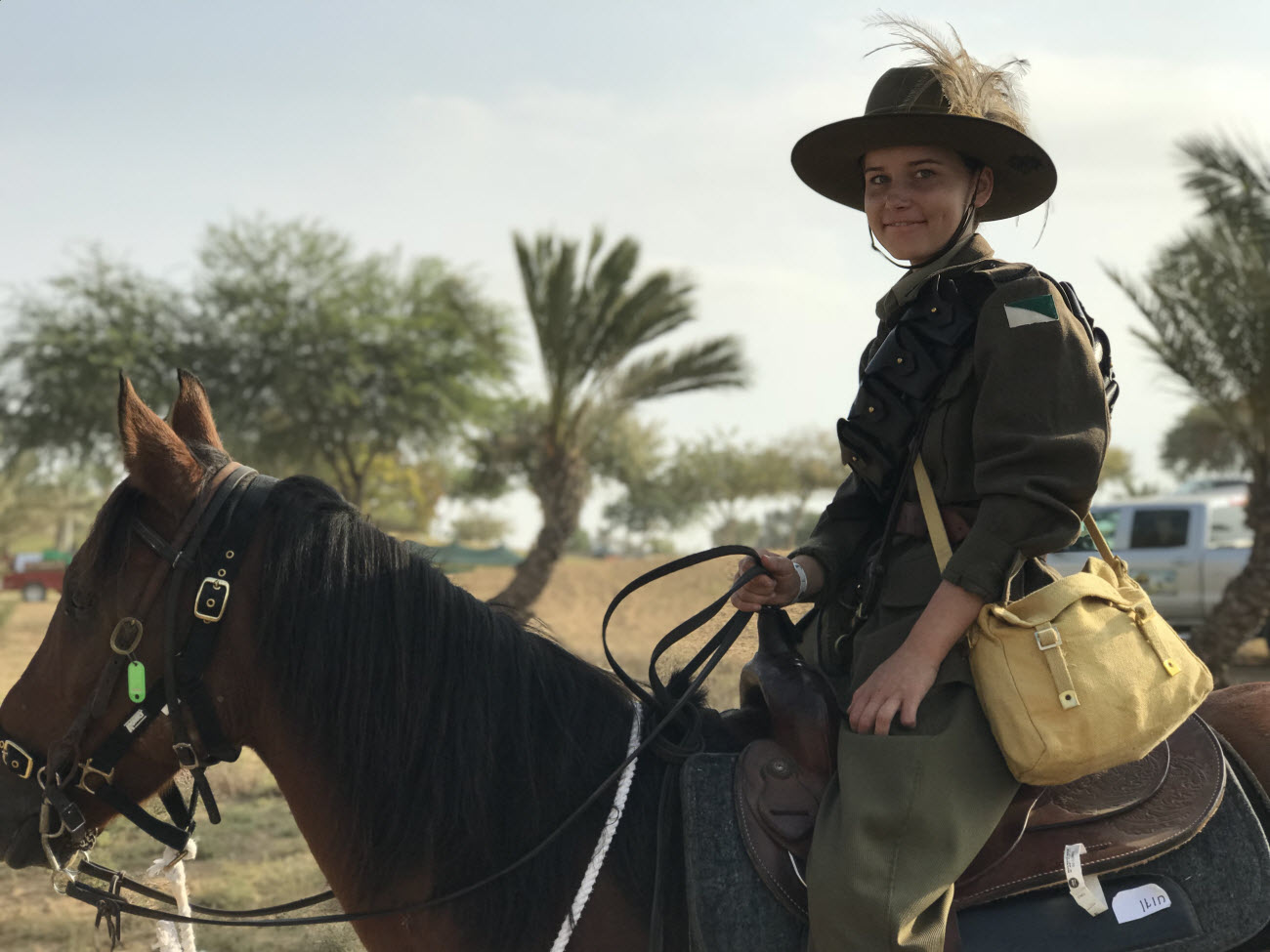 A young rider saddles up for the three-day journey to Beersheba, “following in the hoofprints”. (Brett Mason)
SBS

Conquering these trenches may have paved the way for an Allied victory and the eventual modern state of Israel – but it came at great personal cost to those killed in the chaos of the charge and those left to live the memories.

"They knew they made history," Brian Cantwell tells me tearfully.

His father, Sergeant John Cantwell, was in the first wave of six to jump the Turkish trenches.

"But they just got on with it. They coped with life under terrible, awful memories of having murdered so many people. I hope we never forget.”

The centenary of the Battle of Beersheba was marked in Israel on October 31, 2017. Prime Minister Malcolm Turnbull was in attendance.