Around 250 protesters were arrested nationwide including 175 in Minsk, according to human rights advocates.

Huge crowds of Belarusian protesters on Sunday flooded the capital Minsk, urging strongman Alexander Lukashenko to quit power, defying the threat of arrest and a massive deployment of forces.

More than 100,000 people are estimated to have taken to the streets of the capital Minsk over the past three weekends and AFP journalists said the crowds in Minsk might have been even larger on Sunday.

Troops, water cannon, armoured personnel carriers and armoured reconnaissance vehicles were deployed to the city centre but protesters from all walks of life - from parents with children to students and even priests - rallied in a show of defiance. An opposition supporter stands next to riot police officers blocking Independence Avenue during the March of Unity.
AP

Around 250 people were arrested nationwide including 175 in Minsk, according to the Viasna rights group.

An interior ministry spokesperson refused to confirm the figures.

Many protesters held red-and-white flags and placards while a band beat drums and played other instruments.

"Despite rain and pressure from the authorities, despite repression, many more people turned up in Minsk than last Sunday," top opposition figure Maria Kolesnikova told reporters.

"I am convinced that protests will continue until we win."

#Belarus. This never happened before,not at this scale. Prominent figures were detained,many left,the authorities tried to scare and coerce,and yet dozens of thousands come out to the streets again and again. Their banners are demands: “Lukashenko to a police van” and “Tribunal” pic.twitter.com/5ztGsfebly

Unprecedented demonstrations broke out after Mr Lukashenko, who has ruled the ex-Soviet state for 26 years, claimed re-election with 80 percent of the vote on August 9.

Opposition rival Svetlana Tikhanovskaya said she won the vote but Mr Lukashenko's security forces have detained thousands of protesters, many of whom accused police of beatings and torture. Several people have died during the crackdown.

Belarusians have been demonstrating across the country for a month even though the protest movement lacks a clear leader, with many activists jailed or forced out of the country.

On Sunday, the protesters marched towards Lukashenko's residence at the Independence Palace where they chanted "Tribunal" and "How much are you getting paid?" One protester held a portrait of Russian opposition leader Alexei Navalny who Germany says has been poisoned with a Novichok nerve agent.

"Please only live," said the placard, referring to President Vladimir Putin's main political rival. Mr Navalny has been in a coma for the past two weeks after he drank what his aides suspect was a cup of poisoned tea in Siberia.

"Sasha, have some tea. It's Putin's treat," some protesters chanted, referring to Mr Lukashenko by his diminutive name.

Many say they will keep taking to the streets until the leader quits. Svetlana Tikhanovskaya is hoping to end the tenure of President Alexander Lukashenko.
AAP

Another protester, 40-year-old Anastasia Bazarevich, said: "Half of the village where my grandma lives comes out and protests every night."

Russia has said it will respond to any Western attempts to "sway the situation" and Mr Putin has raised the possibility of sending military support.

Mr Putin has been keen to unify Russia and Belarus, and Moscow has accompanied its recent offers of military aid with calls for tighter integration.

Mr Lukashenko has in the past ruled out outright unification and sought to play Moscow off against the West, but his options are now limited.

On Thursday, Mr Lukashenko hosted Russian Prime Minister Mikhail Mishustin and said the two countries had managed to agree on issues they "could not agree earlier". 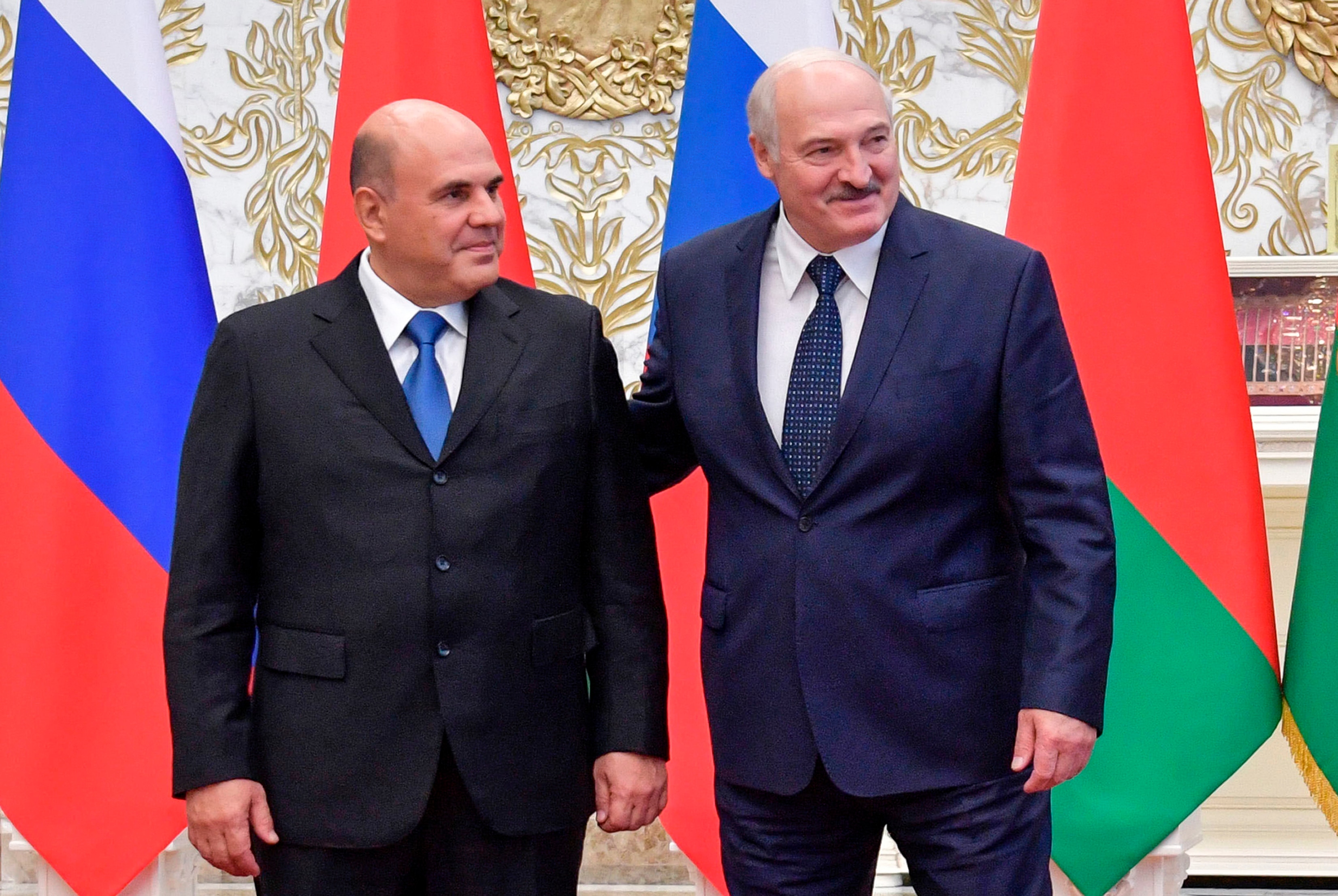 The moustachioed leader said he planned to "dot all the i's" with Mr Putin in Moscow in the next few weeks.

Mr Lukashenko made headlines this week when he claimed that his security forces had intercepted German calls showing that Mr Navalny's poisoning had been faked. Vladimir Putin calls for 'peaceful' end to Belarus unrest, while threatening to send in police

Belarusian state television broadcast the "intercept" in which a Mike in Warsaw and Nick in Berlin discuss Mr Navalny's materials and call Mr Lukashenko a "tough nut to crack."

Mr Lukashenko also raised eyebrows last month when he brandished an assault rifle and had his 16-year-old son Nikolai appear next to him in a bulletproof vest while also wielding a weapon.