Berlin is the first German city to celebrate International Women's Day on March 8 with a public holiday.

It's the first of Germany's 16 federal states to acknowledge Frauentag (Women’s Day) with a public holiday, at the urging of Berlin’s Mayor Michael Müller.

The move was backed by the city-state's governing coalition of Social Democrats (SPD), die Linke (the Left) and the Greens, according to the Deutsche Welle, passing 87 votes to 60. Women march outside Brandenberg Gate during the 2019 Women's March in Berlin, Germany.
AAP

"The commitment to women's rights and equality is part of the Greens' DNA,” Ms Stahr told the Deutsche Welle.

"We are delighted that there is now a majority in the state parliament for the Women's Day [initiative]."

But the vote was also met with some resistance. According to The Local, the Christian Democrats (CDU) expressed preference for a religious-based public holiday to be chosen instead of Women's Day, while the Free Democrats (FDP) argued the public holiday would have negative repercussions for the German economy.

Although the German capital is among a global minority celebrating Women's Day as a public holiday, other countries also acknowledge it, including Russia  - where March 8 has held significance since 1918 and Madagascar, where only working women are given the day off. 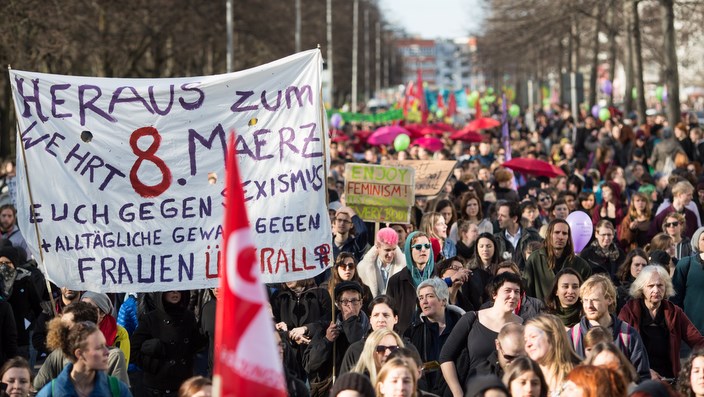 Women take part in a demonstration for International Women's Day in Berlin.
DPA

“It’s important on this occasion to reflect about what still needs to be done to achieve social, economic, cultural and political equality for women across all countries around the world,” Mr Silberberg said.

"The female founders of International Women’s Day and their compatriots could not vote when the date was set. Indeed, for German women, that right was only gained after the end of World War One."

"Generally, I welcome any measures that will help achieve equality for women in all aspects of society," Dr Anna Prinz told SBS.

"I cannot predict whether this new public holiday in the State of Berlin on March 8th will raise awareness and promote equal representation, including equal pay, for women in our society - but I would certainly be very happy if it did and welcome any efforts taken in this direction."

Berlin's announcement of Frauentag's public holiday status in late January saw many express support for the decision on Twitter.

One more reason to LOVE Berlin 😍😍😍

Today Berlin declared the International women’s Day a public holiday. To protest, to remember, to celebrate and to fight for a Feminist future.

Women’s day, 8th of May, is Berlin’s new holiday. Would be awesome if men would still have to go to work on that day #Frauentag

Initially celebrating World Women’s Day in 1911, Germany has held the date fixed in the calendar since 1921.

It was only in 1975, the day was acknowledged by the United Nations and adopted as an official celebration of women, drawing attention to equality.