US Democratic presidential candidate Bernie Sanders is set to return to the campaign trail just three weeks after a heart attack.

US presidential candidate Bernie Sanders will return to the campaign trail in New York City, nearly three weeks after a heart attack that raised concerns about his viability in the Democratic race to pick a challenger to President Donald Trump.

US Representative Alexandria Ocasio-Cortez, one of the leaders of the party's progressives and a frequent target of Trump attacks, will join the "Bernie's Back" rally in Queensbridge Park on Saturday and formally endorse Senator Sanders for the White House, the campaign said.

The rally will be Sanders' first event on the campaign trail since his heart attack on 1 October, after which he had two stents inserted to open a blocked artery. 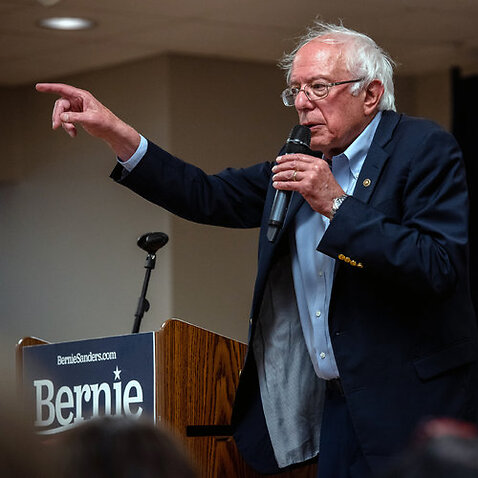 The heart attack threatened to derail the campaign of Senator Sanders, 78, the oldest candidate in the crowded field seeking the Democratic nomination to face Trump in 2020.

The US senator cancelled campaign appearances and returned to his home in Burlington, Vermont, to recover.

But Senator Sanders was back to participate in Tuesday night's three-hour Democratic debate, and he has vowed to resume a full-tilt campaign pushing signature progressive issues such as a government-run healthcare program and a tax on the wealth of the richest Americans.

The backing of Ms Ocasio-Cortez, who represents a New York district near where Sanders will hold the rally, is expected to boost Senator Sanders in his efforts to fight off fellow progressive White House candidate Elizabeth Warren, who has passed Senator Sanders in opinion polls. Senator Sanders runs third behind Senator Warren and former Vice President Joe Biden in most recent national polls, although Senator Sanders raised more money for his campaign in the last quarter than any other Democrat.

US Representative Ilhan Omar of Minnesota, another member of a group of progressive first-term congresswomen known as "The Squad," announced her endorsement of Senator Sanders on Tuesday.

A third member of the group, Rashida Tlaib, is also expected to endorse Sanders, and his campaign said Senator Sanders would tour her Detroit district with Tlaib on 27 October.