Billionaire Sebastian Pinera has been inaugurated as Chile's president, his second term after being outsted in 2014, with promises to revive the economy.

Conservative billionaire Sebastian Pinera has been sworn in as Chile's president, returning to the job after four years of centre-left rule with promises to revive investments in the world's top copper producer.

Mr Pinera, who governed Chile in 2010-2014, accepted the presidential sash from outgoing socialist president Michelle Bachelet in a ceremony on Sunday in the Pacific port city of Valparaiso.

The billionaire was elected in December with a strong mandate, marking a new rightward shift in South America after conservative leaders rose to power in Peru, Brazil and Argentina.

His second term begins as prices for copper exports are rising, bolstering government revenues and driving growth in Chile's US$250 billion economy. 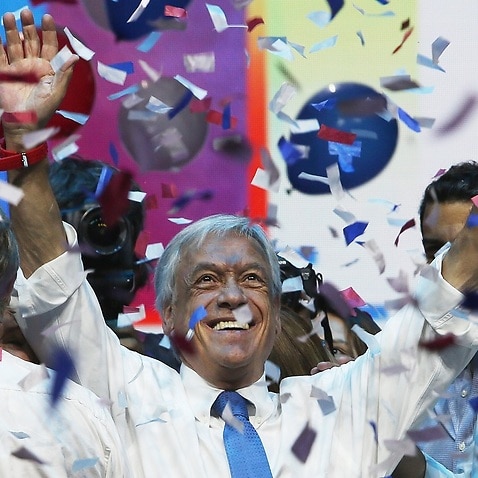 Former billionaire president returns to power in Chile after election

But he will face a divided congress and a prickly leftist coalition that has vowed to fight his plans to lower taxes and "refine" Ms Bachelet's progressive policies.

The 68-year old Mr Pinera and his wife waved at supporters as they passed through streets packed with cheering Chileans waving the national flag.

Mr Pinera is scheduled to deliver a speech later on Sunday.