There have been protests outside the gates of Brazil's once much-loved museum over what many say was a preventable fire.

Brazilian officials on Monday blamed years of government cutbacks for an inferno that gutted the treasured National Museum, described by President Michel Temer as a "tragic" loss of knowledge and heritage.

Even before the embers had begun to cool Monday, grief over the huge cultural loss gave way to anger at funding cuts many say are threatening Brazil's multi-cultural heritage.

The museum's destruction caused a social media outcry and a crowd of around 500 protesters gathered to form a human chain around its still-smoldering remains.

"It's not enough just to cry, it is necessary that the federal government, which has resources, helps the museum to reconstruct its history," director Alexandre Keller said in front of the devastated building. 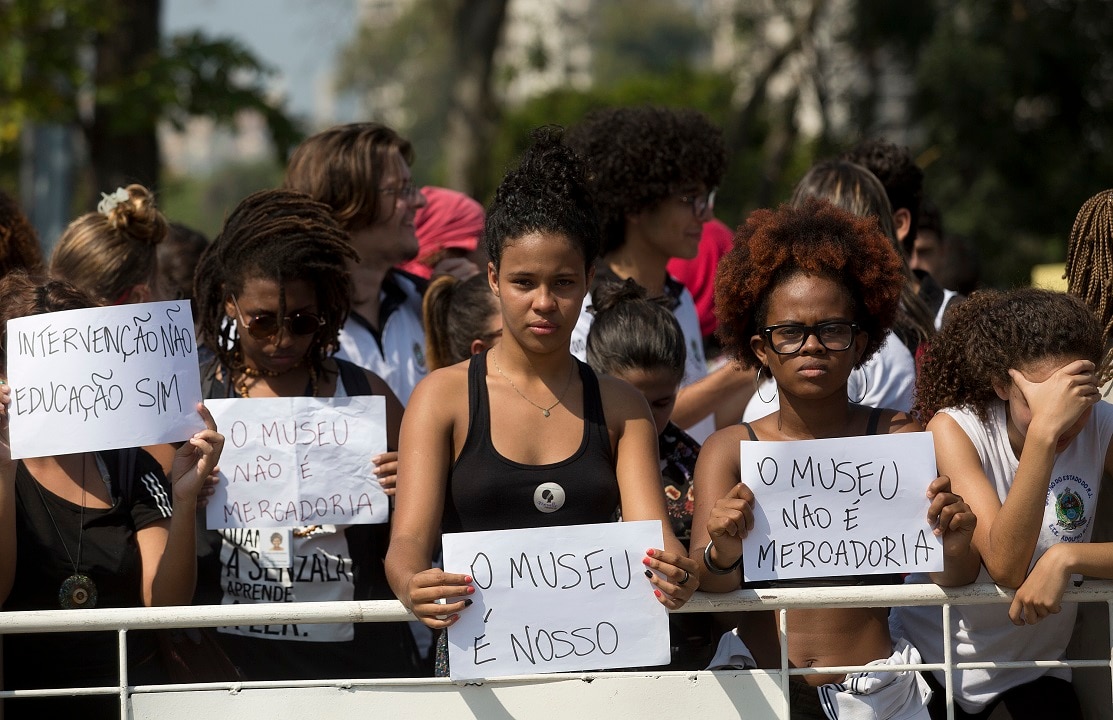 The majestic edifice was swept by flames after closing to the public as plumes of smoke shot into the night sky, while scores of firefighters battled into the early morning to control the blaze.

The fire had been largely smothered early Monday, but not before it had torn through hundreds of artifact-packed rooms in the 13,000-square-meter (139,930-foot) building.

By morning, the extent of the losses were still unclear -- although a fire department spokesman told AFP there were no reports of victims so far. 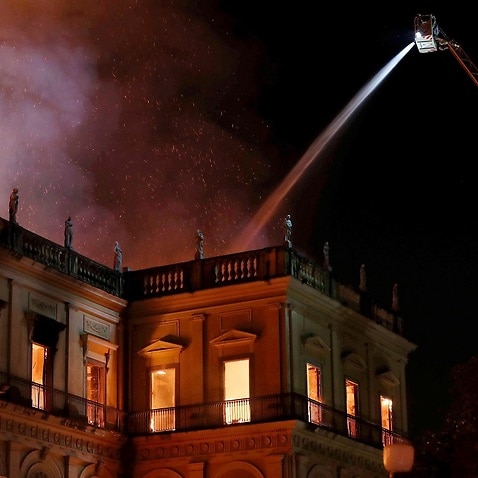 Firefighters combed the charred ruins to see what might be salvageable.

"The facade is resistant, but a lot of material fell from the roof," a fire spokesman said. "We are going to proceed with great care, to see if we can save something."

The natural history and anthropology museum -- founded in 1818 and home to more than 20 million valuable pieces before the disaster -- has suffered from funding cuts, forcing it to close some of its spaces to the public.

The head of finance and planning at the Federal University of Rio de Janeiro, on which the museum depends, described the destruction as "a loss to the whole world."

"We are not going to put up with this strangulation of public resources anymore," Roberto Antonio Gambine Moreira told AFP.

"This is a sign of the lack of investment, a lack of resources and the consequences that brings."

The museum's collection included art and artifacts from Greco-Roman times and Egypt, as well as the oldest human fossil found within today's Brazilian borders, known as "Luzia."

"Luiza is a priceless loss for everyone interested in civilization," said Paulo Knauss, director of Brazil's natural history museum.

It also housed the skeleton of a dinosaur found in the Minas Gerais region, along with the largest meteorite discovered in Brazil, which was named "Bendego" and weighed 5.3 tons.

Pieces covering a period of nearly four centuries -- from the arrival of the Portuguese in the 1500s until the declaration of the first Brazilian republic in 1889 -- were also stored there.

"This is a tragic day for Brazil," Temer said in a statement. "Two hundred years of work and research and knowledge are lost." 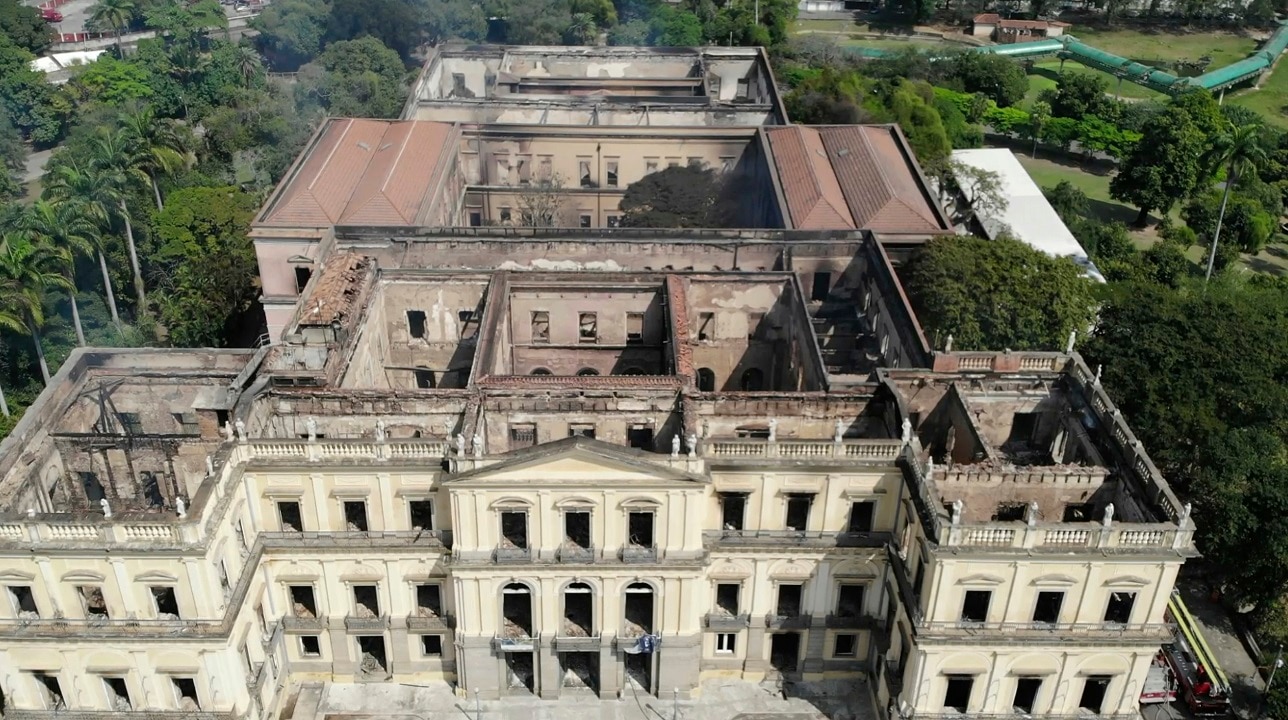 The aftermath of the fire that gutted the National Museum.

"There will be little or nothing left of the palace and the exhibits," Culture Minister Sergio Sa Leitao tweeted.

A deputy director at the museum, Luiz Fernando Dias Duarte, voiced "profound discouragement and immense anger" as the treasured institution burned, accusing Brazilian authorities of a "lack of attention."

He said the museum, a former palace that was once the official residence of the Portuguese royal family, had always lacked necessary support.

The fire comes as campaigning for October's critical presidential vote gets underway, one of the most uncertain Brazilian elections in decades.

Senator Lindbergh Farias of the country's leftist Workers' Party blamed the institution's lack of funding on spending cuts ordered by the government.

Sa Leitao, who in July 2017 became culture minister under Temer -- a deeply unpopular center-right leader -- acknowledged that "the tragedy could have been avoided" but said "the problems of the National Museum have been piling up over time."

The minister recalled that in 2015 under the government of leftist Dilma Rousseff the museum had been closed for maintenance.

He said a reconstruction project would be set in motion, adding "this tragedy serves as a lesson."

"Brazil needs to take better care of its cultural heritage and the collections of its museums," he said.

Marina Silva, a former environment minister who is running for president, called the blaze "equivalent to a lobotomy of the Brazilian memory."

The collection, she said, "contains objects that helped define the national identity -- and are now turning to ashes."