Brazil's airforce and Venezuela's government have sent more oxygen tanks and respirators to the Amazonas region, which is struggling to treat COVID-19 patients.

The Brazilian jungle state of Amazonas has received more emergency supplies of oxygen and respirators, as the military and neighbouring Venezuela scrambled to alleviate an unfolding humanitarian crisis caused by the COVID-19 outbreak.

The Air Force said it had evacuated 12 patients from the state capital Manaus to the northern city of Sao Luis overnight, with hospitals at breaking point with no oxygen supplies and overflowing intensive care wards.

Mass graves were dug in Manaus during the first wave of the pandemic last year. Harrowing scenes are again emerging in the second wave, of doctors and relatives running out of supplies and equipment while trying desperately to keep patients alive. Brazil's Air Force said on Saturday a second flight had landed in Manaus with eight tanks of liquid oxygen, following an earlier emergency delivery of five tanks, and the Navy said in a statement that it is sending 40 respirators.

Venezuela, meanwhile, said it has sent the first batch of oxygen supplies on the 1,500-km road trip to Amazonas, which should arrive in Manaus on Sunday.

Foreign Minister Jorge Arreaza said the Venezuelan government "will supply oxygen for the duration of the emergency situation in the state of Amazonas".

As well as the snowballing second wave of the virus, Brazil is now also dealing with a new, potentially more contagious coronavirus variant that originated in Amazonas and prompted Britain on Thursday to bar entry to Brazilians. 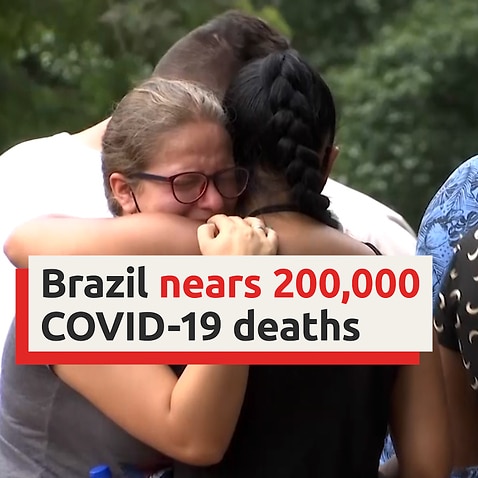 Brazil closes in on 200,000 coronavirus deaths as pandemic rages

The government of President Jair Bolsonaro, a COVID sceptic, has come under heavy criticism for its handling of the crisis and its failure so far to roll out a vaccination program.

Brazil on Saturday reported over 1,000 virus-related deaths for the fifth day in a row.

Mr Bolsonaro and his government have called for "early treatment" of COVID-19 symptoms as part of a campaign to promote the use of the anti-malarial drug hydroxychloroquine, despite studies discrediting such a treatment.

Meanwhile Brazil's health regulator Anvisa has sent back documents submitted by pharmaceutical company Uniao Quimica seeking approval for emergency use of the Russian Sputnik V coronavirus vaccine because they did not meet the minimum criteria required.

In a statement on the Health Ministry website, Anvisa said the firm's request failed to provide adequate assurances on its Phase III clinical trials and issues related to the manufacture of the vaccine.