Bushfire survivors have used burnt debris from homes destroyed this summer to create a trail of destruction from Parliament House to a mining lobby group's office.

Bushfire survivors have used burnt debris to create a "trail of destruction" from Parliament House to the Canberra offices of a mining lobby group.

Carrying remnants of their charred homes in wheelbarrows they chanted in unison demanding an end to the influence of the coal sector on politicians. Jack Egan lost his house on New Year's Eve when a firestorm tore through the property on the NSW south coast.

He was separated from his wife Kath during the blaze, and for a time both thought each other were lost.

“After the firestorm passed that was a powerful emotional experience," he said.

His message to Prime Minister Scott Morrison is for the government to fulfil its duty to "protect its citizens from harm", by taking effective climate action.

“I urge all Australians to speak up and demand action now,” he said.

"We cannot let ourselves be in for too much more of what's to come." 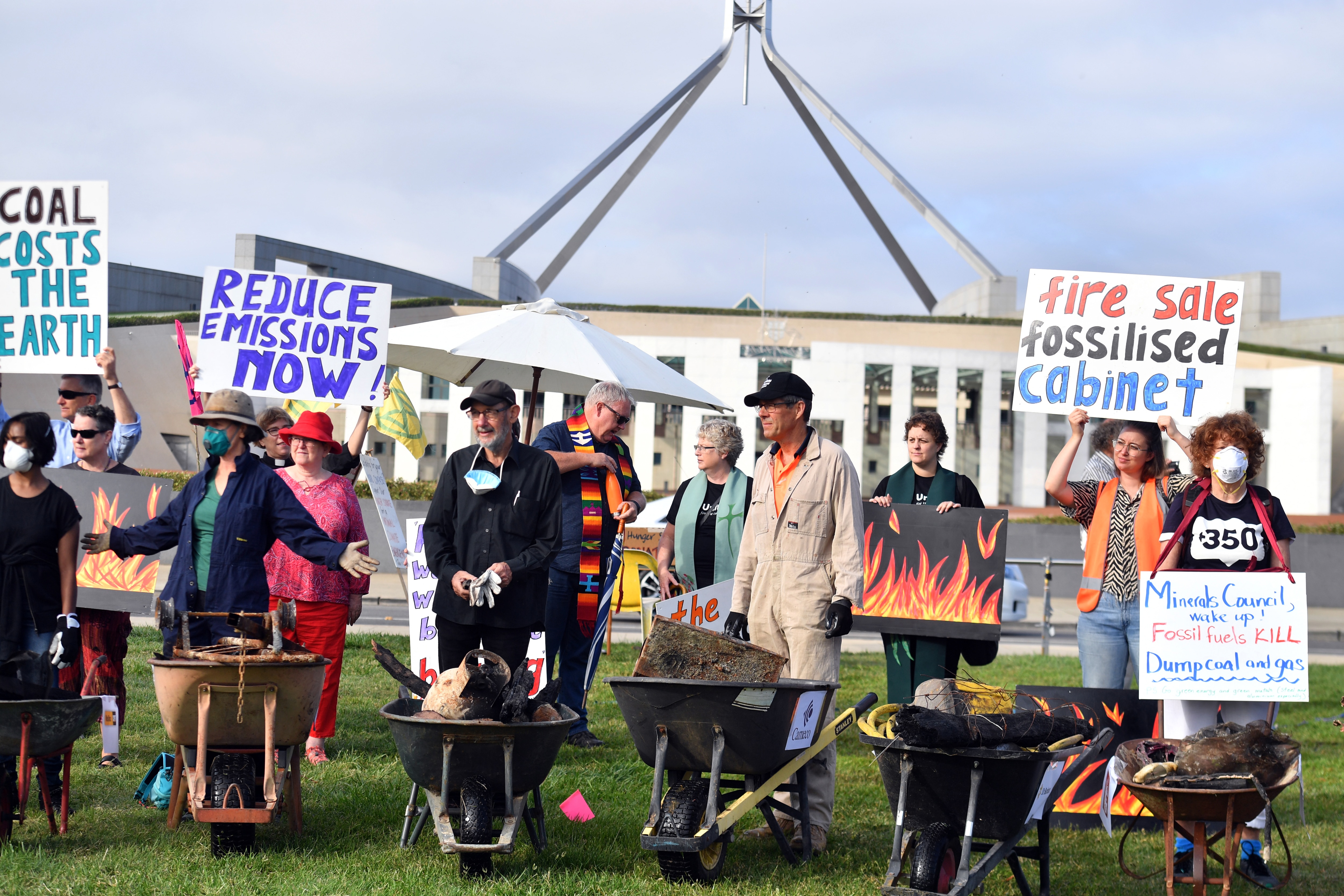 Bushfire survivors use burnt debris from the recent bushfires to create a symbolic trail of destruction outside Parliament House.

The activists are advocating for an end to political donations from the coal sector and for coal-fired power to no longer be subsidised.

Nick Hopkins evacuated his property near Malua Bay on the morning of New Year's Eve as devastating fires ripped through the south coast of NSW.

The sculptor said the scene was like a bomb had gone off tearing through his home and workshop.

"This is the day the climate crisis became personal for me," he told SBS News.

"We knew our house was not able to be defended to a bushfire of this severity driven by the climate crisis." 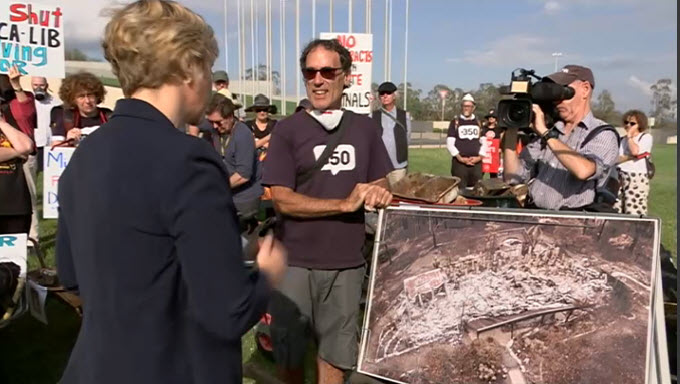 Nick Hopkins with a photo of his destroyed property.
SBS News

Environmental activists are using the demonstration to urge businesses and politicians to cut ties with mining lobbyists.

The bushfire survivors also delivered to the Minerals Council of Australia a $1.3 billion invoice, based off one estimated cost of the bushfire crisis. 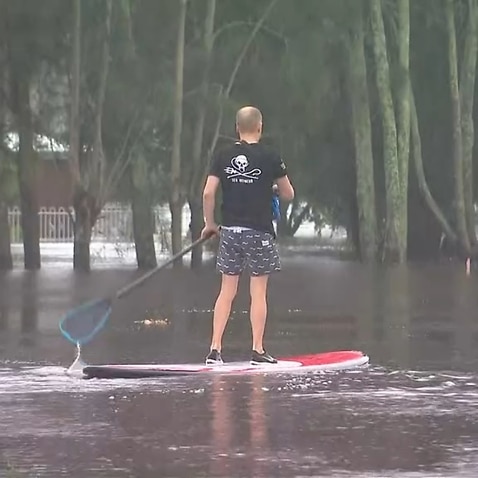 'How much can a community bear?': This NSW town survived bushfires, only to face floods

They are calling on the lobby group to turn its back on coal, and instead focus on investing in minerals to empower a transition towards renewable energy.

The Minerals Council of Australia has recognised that "sustained global action" is required to reduce "human-induced climate change".

"The global transition to low emissions technologies – including solar, wind, batteries, gas, advanced coal and nuclear energy – depends on the metals and raw materials provided by the minerals sector," she said.

"A thriving minerals sector focused on effective and pragmatic climate action is essential to mobilise the solutions required to address climate change."

She said the MCA supported a measured transition to a low emission economy, including through the federal government's pledge to reduce emissions to 26-28 per cent on 2005 levels by 2030. 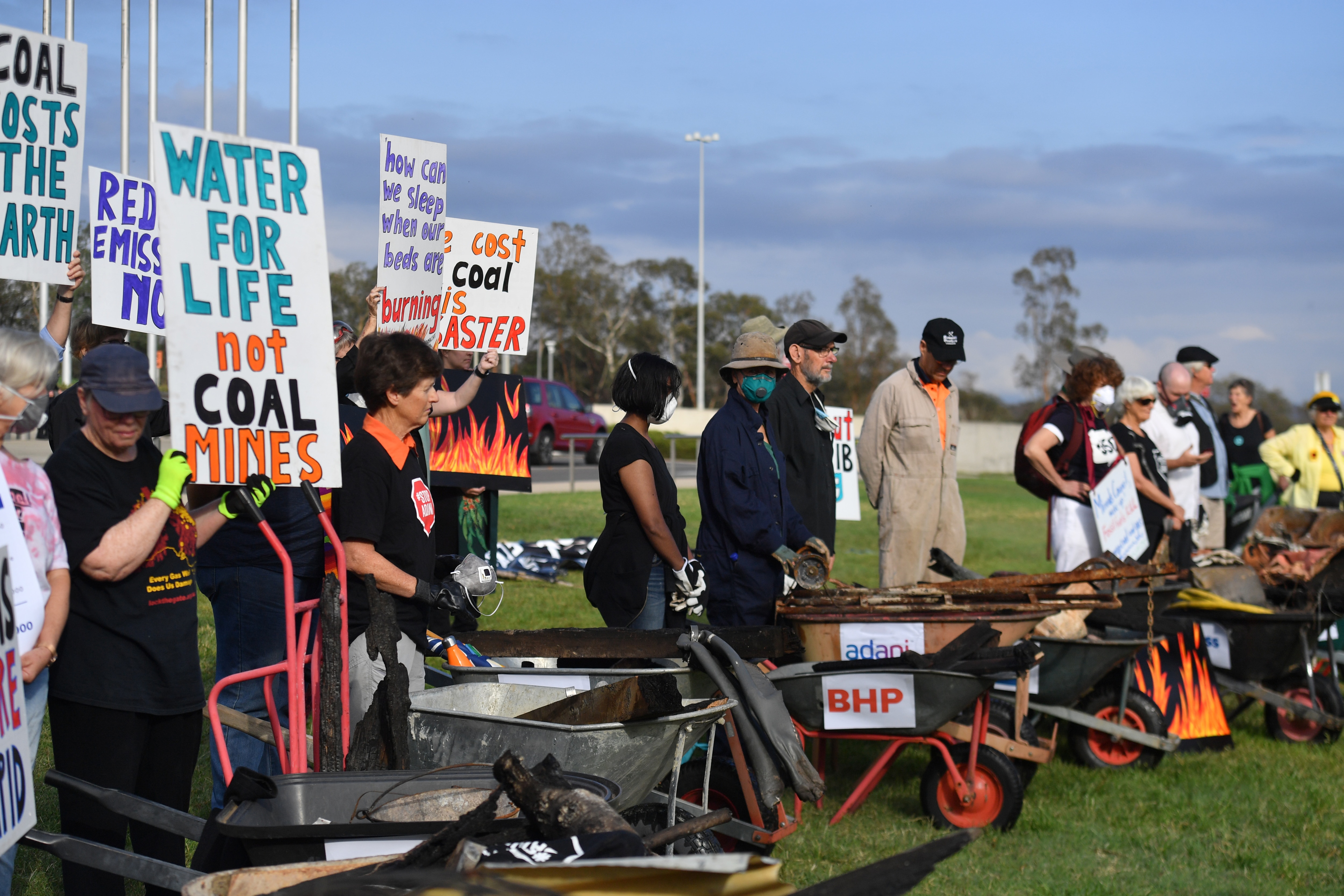 Bushfire survivors use burnt debris from the recent bushfires to create a symbolic trail of destruction outside Parliament House.
AAP

The bushfire survivors are calling on Australia to take global leadership on climate action, with concerns the current approach is not having enough impact. 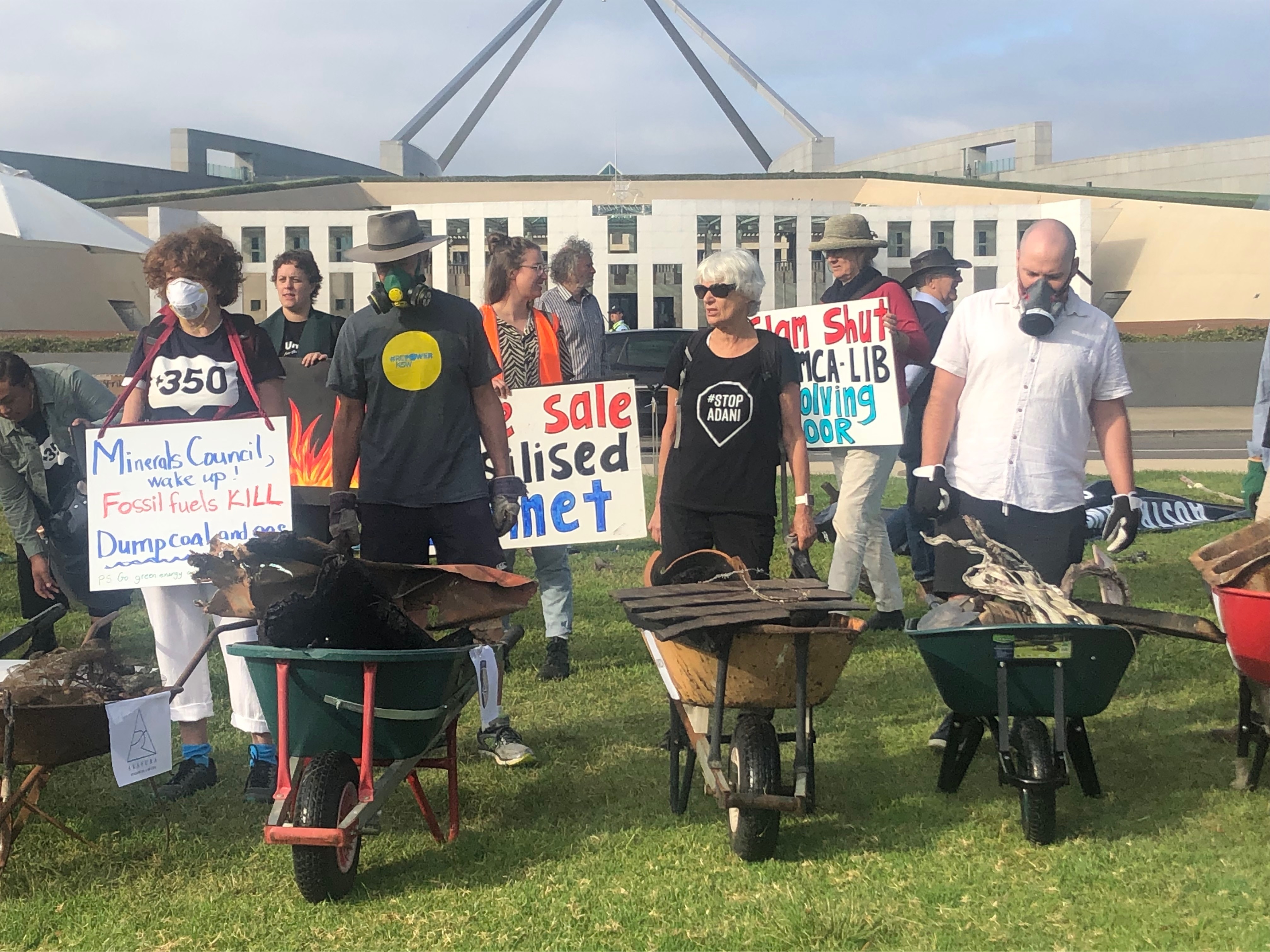 Paul Adcock's property near Yowrie backs onto the Wadbilliga National Park, where blazes burned out of control sweeping through to the NSW town of Cobargo.

Mr Adcock said the blaze "burned down" his home, but rather than mourn for this loss, he wants to harness his despair to do something about it.

"I firmly believe that we have got to decarbonise the economy," he said.

"It is time for people to get real - we know what the science says.

"We've got to stop the carbonisation of the atmosphere going even further."