Bushfire safe housing isn't all about concrete bunker homes and huge bills. Integrating bushfire proof materials into the design of a home can save money and protect the building.

Living in Australia’s beautiful, rugged bushland can be a doubled-edged sword.

So far this year more than 200 homes have been lost to bushfires, but there is a push towards making bushfire safe building practices more common, which could save homes in the future.

He said many people also believe bushfire safe houses, which can be built to withstand six different bushfire attack levels, had to look like “concrete bunkers”. Calls for a judge to review WA bushfire

Dr Weir said the first five levels of potential bushfire attack saw homes threatened by “primarily ember attack and in the mid-range at [both] radiant heat and ember attack”.

“The sixth level has flame contact, ember attack and radiant heat, so you’re dealing with all three,” he said.

Only a house built to withstand the worst possible bushfire conditions might be comparable to a concrete bunker, Dr Weir said.

These six levels of potential bushfire threat to a home take into account the surrounding vegetation and landscape and how a fire may affect a property.

Dr Weir said ember attack was the main cause of home destruction during bushfires, with embers able to travel far ahead of the fire front.

“In Yarloop most of the houses were lost through ember attacks and once one house caught fire the next caught fire and then you’ve got a town site fire,” he said.

Bushfires do not get hot enough to completely destroy a property, Dr Weir said, but structural fires do.

Embers work their way into cracks or gaps in a property or get under the eaves, starting a structural fire that can be very difficult to put out, he said.

He said using a steel frame for the house was a good place to start, along with building materials like brick or rammed earth.

Dr Weir said it was often complying with energy regulations that cost home owners a lot of money, and many of the measures taken to keep a house energy efficient, like using rammed earth, would also keep it safe in a bushfire.

He said bushfire-proofing elements such as toughened glass, window mesh and window shutters could also fulfill everyday roles such as fly screens or shades.

“Bushfire prone areas are often really hot in summer but quite cold in winter…and a lot of the things you need to make a house thermally comfortable are also bushfire proof,” Dr Weir said.

Both Mr Leonard and Dr Weir agreed retrofitting a conventional home to survive a bushfire could become expensive, however integrating protections into a home design could be relatively cost-effective.

Dr Weir said bushfire safe materials and measures would often cost no more than about 5 percent of the value of a house.

One of Dr Weir’s designs, known as the Kari Fire House, in Western Australia cost $500,000 to build and the fire safe measures, which included special glass, ember screens and a non-combustible verandah, cost just 2.6 per cent of the total cost, or about $13,000.

She said study needed to be done in places like Wye River in Victoria, where nearly 98 homes were lost last December, to see what conditions and construction allowed a house to survive a bushfire without the owner present.

“There were new homes building to bushfire standards at Wye River that were destroyed,” Ms Cotter said.

“We want to see what works when there’s no human interaction.”

She said there were cases of older, weatherboard homes that had been able to survive bushfires after they had been retrofitted with bushfire measures like sprinkler systems, while new homes next door had burned to the ground.

“We need a whole new way of thinking [in relation to bushfire-safe construction],” Ms Cotter said.

But a big part of being bushfire ready came down to homeowners maintaining their homes and keeping them up to standard, Mr Leonard said.

“You need to close your windows [in a bushfire] and you should not park your caravan hard up against the side of your house.

“It really comes down to the responsibility of that owner.

“If you do it in the right way it is relatively cheap to build something [bushfire safe].” 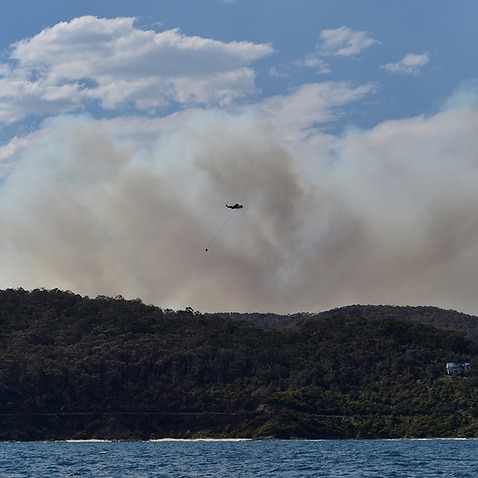