As India's COVID-19 surge prompts lockdowns in southern states, there are calls for a national lockdown to stop the "explosive" growth of the virus.

Two southern states in India are the latest to declare lockdowns, as coronavirus cases surge at breakneck speed across the country and pressure mounts on Prime Minister Narendra Modi's government to implement a nationwide shutdown.

Experts say even those dramatic tolls are undercounts.

At more than 300,000, Karnataka's capital of Bengaluru has the highest active caseload of any Indian city.

But experts warn the worst is still ahead as India's third largest city buckles under oxygen shortages, overrun hospitals and crowded crematoriums. 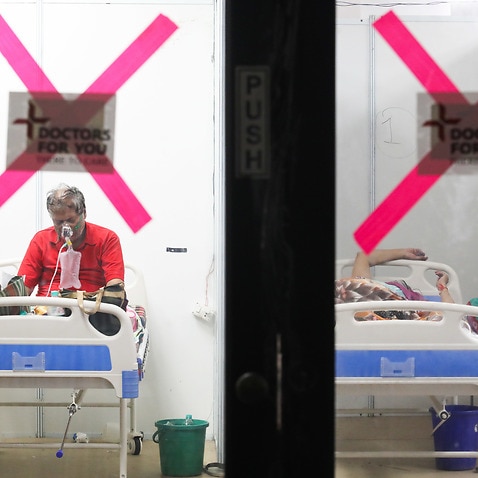 Tamil Nadu, known for its automobile manufacturing, said it would move from a partial to a full lockdown on Monday, stopping public transport and shutting state-run alcohol retailers.

Neighbouring Karnataka state extended a total shutdown late on Friday. The state capital Bengaluru is a major tech hub, home to major offices of companies including Google, Amazon and Cisco.

India is yet to impose a national lockdown as it did during its first wave last year, but around half of all its states have imposed a total shutdown. The rest are under a partial shutdown. A labourer rest at Mundera Market during government imposed lockdown in wake of coronavirus in Allahabad.
Pacific Press/Sipa USA

Calls for a national lockdown

India's main opposition leader Rahul Gandhi has warned that unless the deadly second COVID-19 wave is brought under control, it will devastate India as well as threaten the rest of the world.

In a letter, Gandhi implores Prime Minister Narendra Modi to prepare for another country-wide lockdown, accelerate a vaccination program and scientifically track the virus and its mutations.

Gandhi, leader of the Indian National Congress party, says the world's second-most populous country has a responsibility in "a globalised and interconnected world" to stop the "explosive" growth of COVID-19 within its borders. 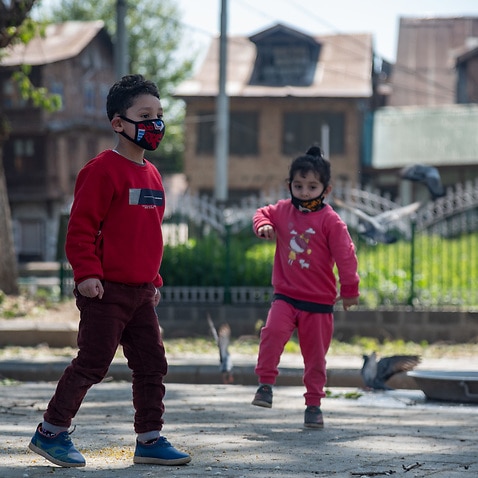 "India is home to one out of every six human beings on the planet. The pandemic has demonstrated that our size, genetic diversity and complexity make India fertile ground for the virus to rapidly mutate, transforming itself into a more contagious and more dangerous form," Gandhi says.

"Allowing the uncontrollable spread of the virus in our country will be devastating not only for our people but also for the rest of the world." A woman mourns as her relative died of Covid-19 coronavirus at the Covid-19 hospital in Ahmedabad, India, 7 May 2021.
EPA

Infections have swelled in India since February in a disastrous turn blamed on more contagious variants as well as government decisions to allow massive crowds to gather for religious festivals and political rallies.

One doctor in Bengaluru said he's had to reject patients "left, right and centre" as his hospital struggled to find more oxygen.

"The problem is the demand is so high that we need constant oxygen," said Dr Sanjay Gururaj, the medical director at Shanti Hospital and Research Center.

The hospital is sending a truck twice a day to oxygen plants on the outskirts of the city to bring back 12 jumbo oxygen cylinders.

"In normal times, this would have lasted over two weeks - now, it lasts just over a day," he added. 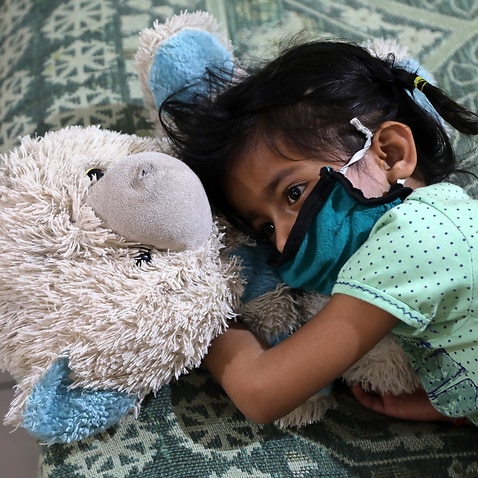 The state's oxygen shortages prompted the high court on Wednesday to order the federal government to increase the daily liquid medical oxygen supplied to Karnataka.

The ruling came after 24 COVID-19 patients died in a government hospital on Monday. It's unclear how many of them died due to the lack of oxygen, but an investigation is ongoing.

Experts caution that the surge in Bengaluru is fast eclipsing other hard-hit cities like the capital, New Delhi, and Mumbai. Cases have increased 100-fold since February, said Murad Banaji, a mathematician modelling COVID-19 growth in India, citing official data.

Test positivity has jumped to over 30 per cent, which indicates the infection is much more widespread than confirmed figures, he added.

"Disaster was looming by early March, when cases started to shoot up," he said. 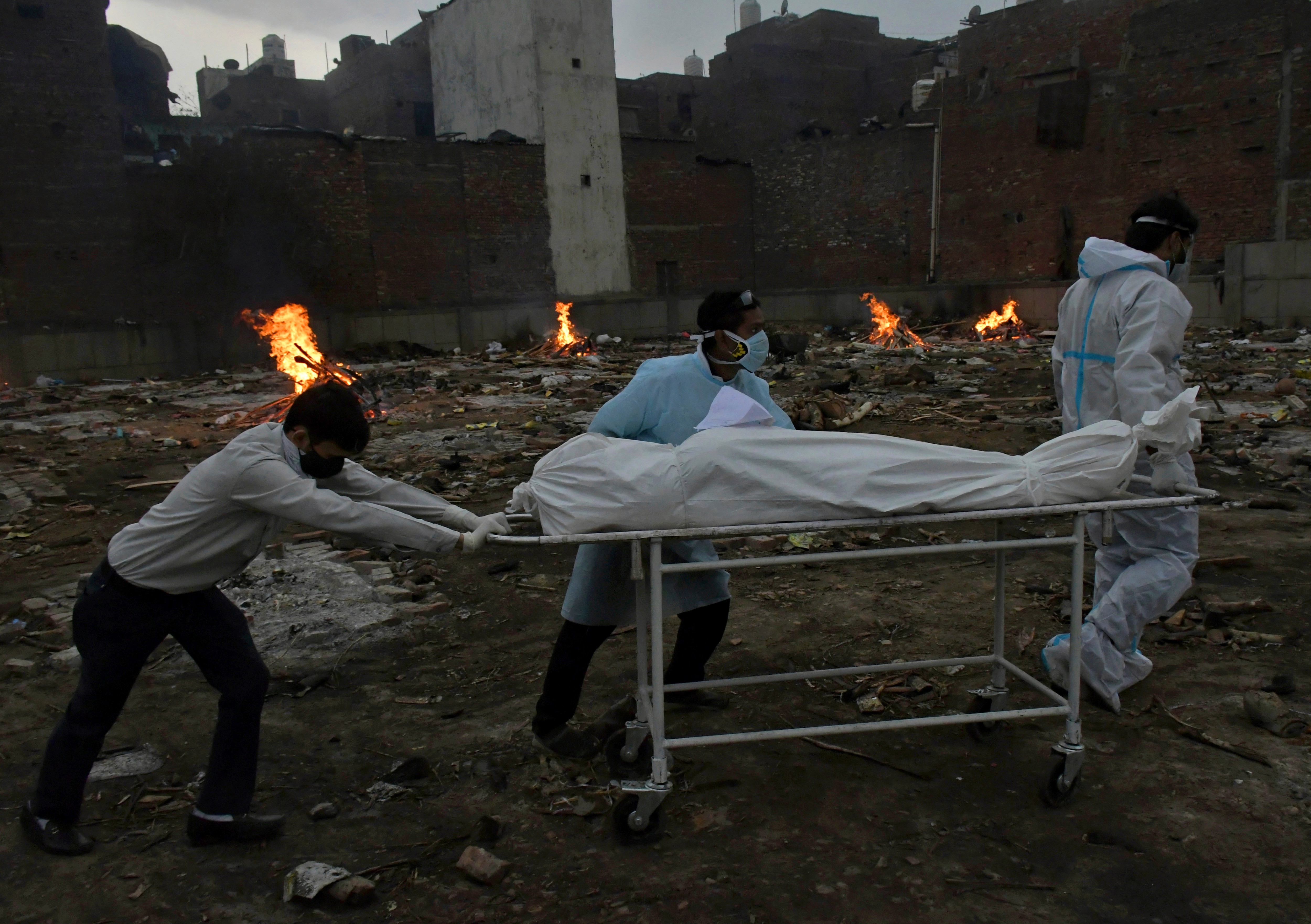 The body of a COVID-19 victim is wheeled in for cremation in a ground that has been converted into a crematorium in New Delhi, India, Thursday, May 6, 2021.
AP

"Bangalore is more than a ticking time bomb right now - it is in the middle of an explosion." Bengaluru was previously known as Bangalore.

Much of the focus in recent weeks has been on northern India, led by New Delhi, where television stations have broadcast images of patients lying on stretchers outside hospitals and of mass funeral pyres that burn throughout the night.

The situation unfurling in Karnataka has thrown attention to other southern states also battling a rise in cases. Daily cases have breached the 20,000 mark for the past three days in Andhra Pradesh state, leading to new restrictions there. 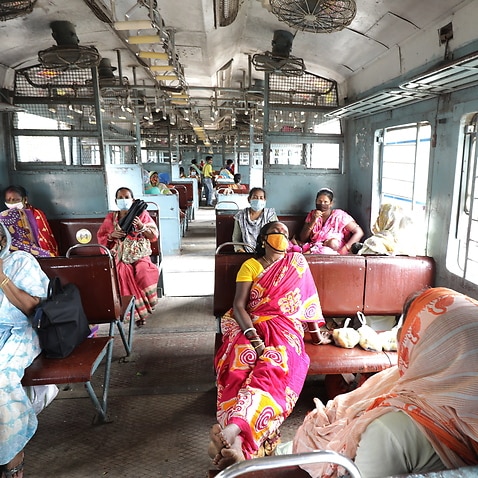 Kerala, which emerged as a blueprint for tackling the pandemic last year, began a lockdown on Saturday.

With daily cases crossing 40,000, the state is aggressively boosting resources, including converting hundreds of industrial oxygen cylinders into medical oxygen.

But while the virus has ripped through large cities in waves, smaller towns and villages, where health care is less accessible, are now exposed.