UN Secretary-General Antonio Guterres on Sunday said he was "extremely concerned over the fresh resumption of hostilities" between Armenia and Azerbaijan in the Armenia-backed breakaway region of Nagorny-Karabakh.

Arch foes Armenia and Azerbaijan on Sunday accused each other of initiating deadly clashes that claimed at least 23 lives over a decades-long territorial dispute and threatened to draw in regional powers Russia and Turkey.

The worst clashes since 2016 have raised the spectre of a fresh war between long-standing rivals Azerbaijan and Armenia which have been locked for decades in a territorial dispute over the Armenia-backed breakaway region of Nagorny-Karabakh. Volunteers of the Armenian Revolutionary Federation gather to leave for Nagorny-Karabah in Yerevan, Armenia, 27 September 2020.
AAP

"We are tired of Azerbaijan’s threats, we will fight to the death to resolve the problem once and for all," Artak Bagdasaryan, 36, told AFP in Yerevan, adding that he was waiting to be conscripted into the army.

UN Secretary-General Antonio Guterres on Sunday said he was "extremely concerned over the fresh resumption of hostilities" between Armenia and Azerbaijan.

"The Secretary-General strongly calls on the sides to immediately stop fighting, de-escalate tensions and return to meaningful negotiations without delay," Mr Guterres's spokesman said in a statement.

Mr Guterres "condemns the use of force and regrets the loss of life and the toll on the civilian population," the statement said, adding that the secretary-general would speak to the president of Azerbaijan and the prime minister of Armenia.

Karabakh separatists said one Armenian woman and a child were killed, while Baku said that an Azerbaijani family of five died in shelling launched by Armenian separatists. 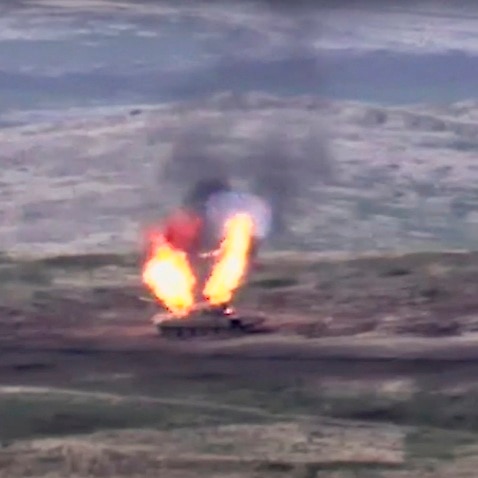 Azerbaijan said it has captured a strategic mountain in Karabakh that helps control transport communications between Yerevan and the enclave.

A major confrontation between Muslim Azerbaijan and majority Christian Armenia threatened to embroil regional players Moscow and Ankara and Armenian Prime Minister Nikol Pashinyan called on global powers to prevent Turkey from getting involved in the conflict. 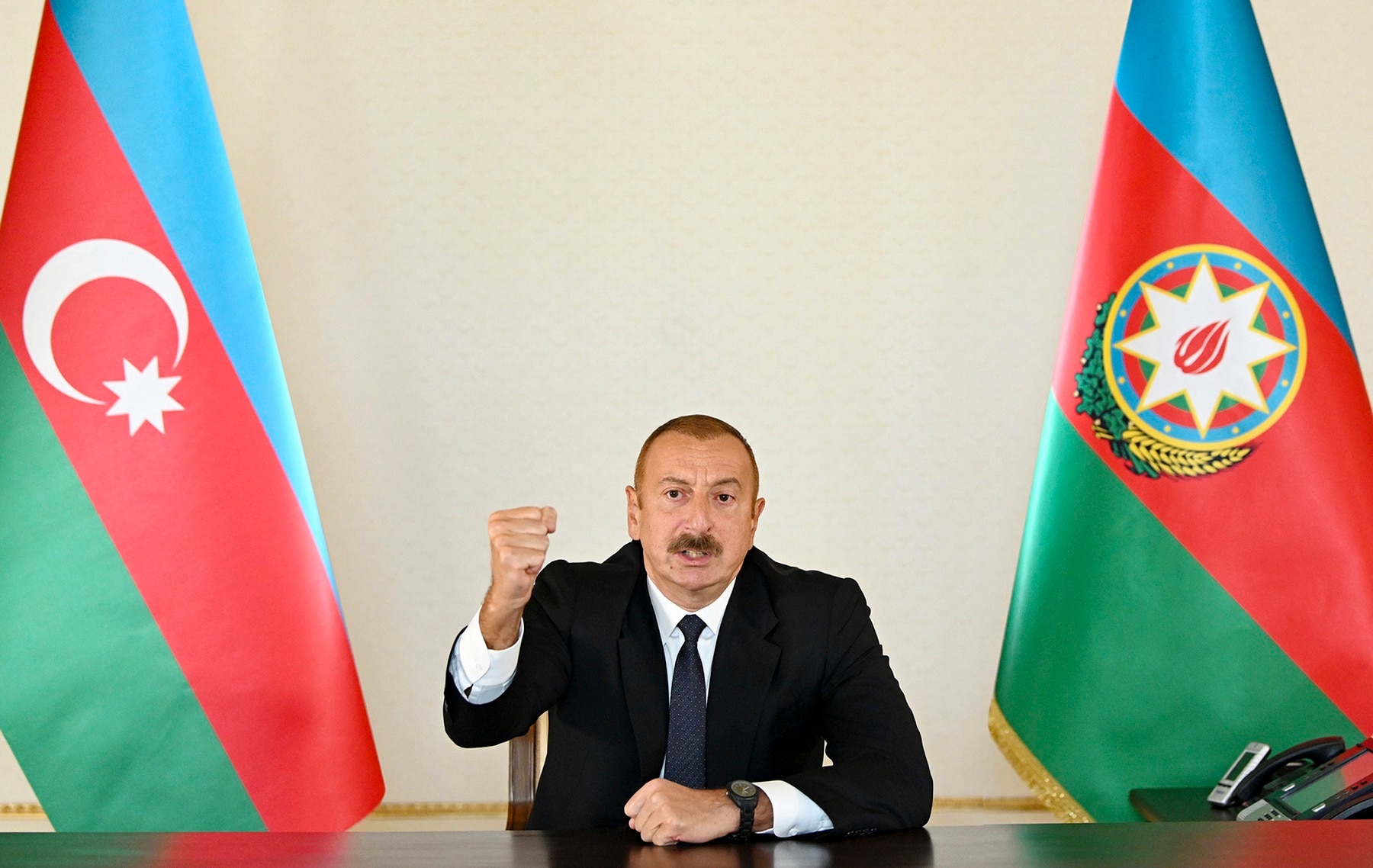 "We are on the brink of a full-scale war in the South Caucasus," Mr Pashinyan warned.

Azerbaijan's "authoritarian regime has once again declared war on the Armenian people", he added.

Russian President Vladimir Putin discussed the military flareup with Pashinyan and called for "an end to hostilities".

"The Russian side expressed serious concern over the resumption of large-scale clashes," the Kremlin said.

But Azerbaijan's ally Turkey blamed Yerevan for the flare-up and promised Baku its "full support".

"The Turkish people will support our Azerbaijani brothers with all our means as always," Turkish President Recep Tayyip Erdogan tweeted. Azerbaijan accused Armenian forces of violating a ceasefire, saying it had launched a counter-offensive to "ensure the safety of the population", using tanks, artillery missiles, combat aviation and drones.

In a televised address to the nation earlier on Sunday, Azerbaijan President Ilham Aliyev vowed victory over Armenian forces.

"Our cause is just and we will win," he said, echoing a famous quote from Soviet dictator Joseph Stalin's address at the outbreak of World War II in Russia.

"Karabakh is Azerbaijan," he said.

Both Armenia and Karabakh declared martial law and military mobilisation.

Azerbaijan imposed military rule and a curfew in large cities.

"Get ready to defend our sacred homeland," Mr Pashinyan said on Facebook.

Mr Pashinyan's wife, Anna Hakobyan, said that she had travelled to a hospital in Stepanakert to be with her Karabakh "brothers and sisters".

Azerbaijan's foreign ministry said there were reports of dead and wounded. "Extensive damage has been inflicted on many homes and civilian infrastructure," it said. A woman with her child sit in a bomb shelter to protect against shelling in Stepanakert, the self-proclaimed Republic of Nagorno-Karabakh, Azerbaijan.
Armenian Foreign Ministry

Ethnic Armenian separatists seized the Nagorny-Karabakh region from Baku in a 1990s war that claimed 30,000 lives.

Talks to resolve one of the worst conflicts to emerge from the 1991 collapse of the Soviet Union have been largely stalled since a 1994 ceasefire agreement.

France, Russia and the United States have mediated peace efforts as the "Minsk Group" but the last big push for a peace deal collapsed in 2010.

1/4 Since morning large-scale attack in #Karabakh conflict zone. Videos from spots show that it takes place along the whole frontline with tanks and infantry.

Unlike in July 2020, this is clearly a well-prepared attack, which can turn into a bigger escalation than in April 2016

"We are a step away from a large-scale war," Olesya Vartanyan of the International Crisis Group told AFP.

"One of the main reasons for the current escalation is a lack of any proactive international mediation between the sides for weeks," she added.

"War is resuming. Time for Russia, France and US, individually and jointly, to stop it," tweeted Dmitry Trenin, director of the Carnegie Moscow Centre.

The rebel defence ministry said its troops shot down four Azerbaijani helicopters and 15 drones, while Baku denied the claim.

In July, heavy clashes along the two countries' shared border - hundreds of kilometres from Karabakh - claimed the lives of at least 17 soldiers from both sides.

During the worst recent clashes in April 2016, around 110 people were killed.