The result is another hammer blow to the Roman Catholic Church's authority in Ireland.

Ireland voted by a landslide to ditch its strict abortion laws in a landmark referendum that Prime Minister Leo Varadkar said had finally lifted decades of stigma and shame.

More than 66 percent of voters in what has been a traditionally staunchly Catholic country backed repealing the constitutional ban on terminations, triggering scenes of tearful jubilation in Dublin on Saturday after a divisive and often emotional campaign.

"Wonderful, wonderful, today is wonderful!" said 65-year-old Eileen Shields, who had been ostracised for falling pregnant outside of marriage when she was 18. The crowds cheered and popped champagne corks as the result was announced. Women and men wearing "Repeal" tops and "Yes" badges waved Irish flags and placards reading "Thank you", with love hearts on.

Speaking through tears, Stasia Clancy, 64, said: "This is like an explosion of the repression and the suppression of the last 100 years."

She told AFP: "I had to leave my country to get the healthcare that I needed when I was told that my baby wouldn't survive outside the womb and I've told my story over and over again just in the hope that this day would come - and it's finally come."

The final results of Friday's referendum showed 66.4 percent voted for removing the constitutional ban, while 33.6 voted against.

Among the 40 constituencies, the pro-choice vote peaked at 78 percent in Dublin Bay South, while rural Donegal was the only one to vote against liberalising abortion, by 52 percent.

"A quiet revolution has taken place," Varadkar said in a speech at Dublin Castle. Yes voters celebrate as the result of the Irish referendum on the 8th amendment concerning the country's abortion laws is declared. A Yes voter breaks down in tears as the result of the Irish referendum on the 8th amendment.
Getty

"No more stigma. The veil of secrecy is lifted. No more isolation. The burden of shame is gone."

He said Saturday would be remembered as the day Ireland "stepped out from under the last of our shadows and into the light. The day we came of age as a country."

His government proposes allowing abortion in the first 12 weeks of pregnancy and between 12 and 24 weeks in exceptional circumstances.

Varadkar said he wanted the law in force by the end of the year and Health Minister Simon Harris told AFP that the cabinet would meet on Tuesday to approve the drafting of legislation.

The result is another hammer blow to the Roman Catholic Church's authority in Ireland, coming three years after referendum voters backed legalising same-sex marriage by 62 percent.

The Church's influence has crumbled in recent years due to a series of child sex abuse scandals.

The referendum comes three months before Pope Francis visits Ireland for the World Meeting of Families.

An exit poll for The Irish Times newspaper suggested 70 percent of women and 65 percent of men voted to overturn the ban.

People over 65 voted 60 percent against. However, all other age groups backed the proposal, with support at 87 percent among voters aged 18 to 24.

Ailbhe Smyth, 71, co-director of the official Together for Yes campaign, said real-life testimonies from women affected by the ban had helped swing the vote. A woman breaks down in tears as the results in the Irish referendum on the 8th amendment concerning the country's abortion laws.
Getty 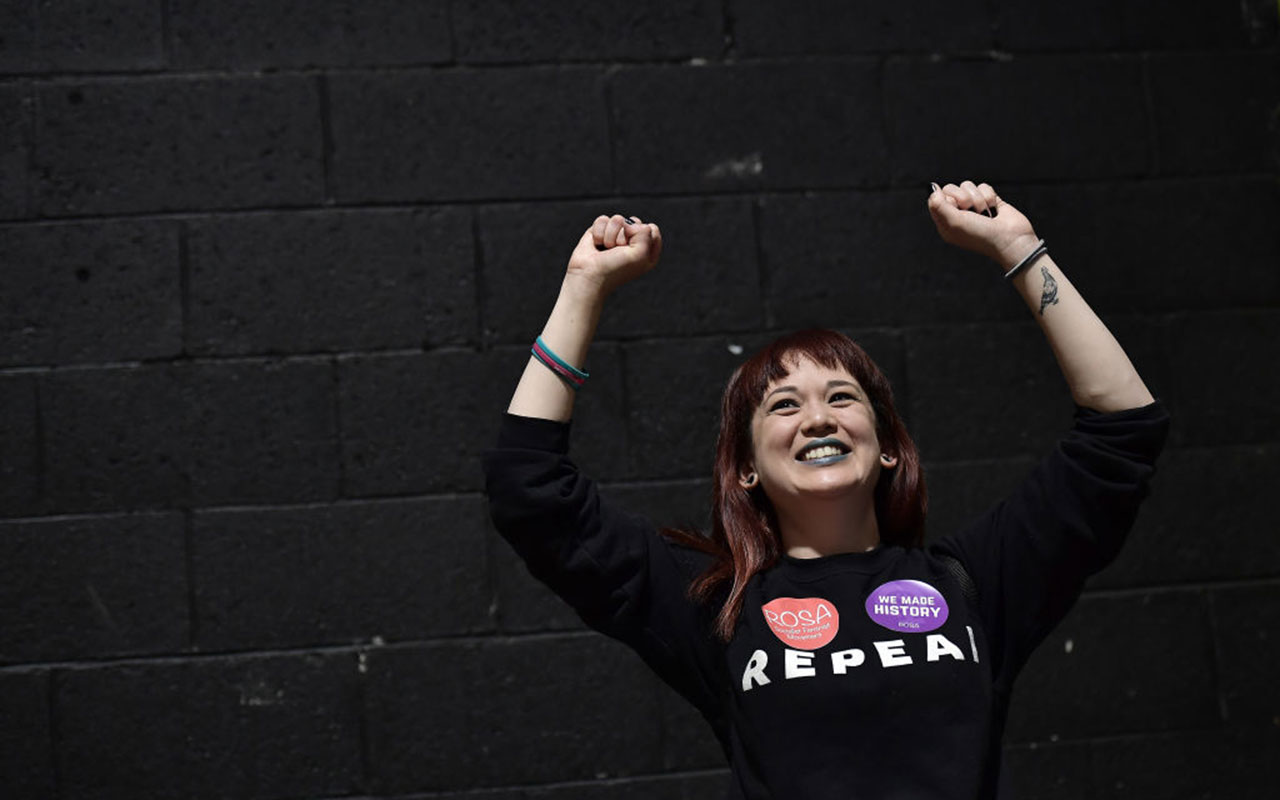 "The stories, the experiences, women's voices, women's and couples, it was a central part of our strategy," she told reporters.

The Love Both official pro-life campaign said regardless of the result, "our work will continue to protect unborn babies and their mothers".

"Our campaign does not end with the referendum, but when the government properly supports the mother and child," it said.

Abortion is still banned in some 20 countries worldwide, while others have highly restrictive laws in place. In the European Union, predominantly Catholic Malta is the only country with a total ban.

'The North is next'

The law was tweaked in 2013 to allow terminations if the mother's life is at risk.

The ban has led to thousands of women travelling each year to neighbouring Britain, where terminations are legal, or increasingly turning to abortion pills sold online. In the UK, abortion is legal on the British mainland but remains outlawed in Northern Ireland.

Sinn Fein's party leaders from both sides of the border held up a placard at Dublin Castle reading: "The North is next".