Rugby Australia chief Raelene Castle says the decision around Israel Folau "is a decision that will change the landscape for sport across Australia and perhaps internationally," but admits with the benefit of hindsight her organisation could have handled the saga better.

Rugby Australia boss Raelene Castle admits it would be wrong to suggest the Israel Folau saga couldn't have been handled better.

"While Rugby Australia accepts the panel's decision to terminate his player contract for his breach of the code of conduct, we want to stress that this outcome is a painful situation for the game," Rugby Australia's Raelene Castle said.

Folau’s contract terminated for high level breach of the code of conduct. “This outcome is a painful decision for the game” says Rugby Australia CEO Raelene Castle @SBSNews pic.twitter.com/CemSjIbiMa

Folau had been found guilty of a “high level” breach during a code of conduct hearing following his controversial Instagram post last month.

The Wallabies star posted on social media that “hell awaits” homosexuals unless they repent, plunging his rugby career into uncertainty.

"Rugby Australia did not choose to be in the situation, but Rugby Australia's position remains that Israel, through his actions, left us with no choice but to pursue the course of action resulting in today's outcome," Ms Castle said. "This has been an extremely challenging period for rugby."

Castle said the decision would change the landscape for sport across Australia and perhaps internationally.

Folau later released a statement saying he was "deeply saddened" by the decision and that he was considering his options.

He has until Monday afternoon to appeal.

If he decides to do that it will necessitate a second code of conduct hearing, which would add to the significant financial costs already incurred by both sides.

Castle said there had been discussions between both sets of lawyers regarding a possible payout to Folau, but they had never advanced far enough to be brought to the RA Board.

Asked if RA could have better handled the situation regarding the negotiations of Folau's last contract Castle said: "You couldn't go through an issue like this and not say that you couldn't.do things better.

"You'd be crazy to say that. But it's often done with the benefit of hindsight and the sequence of events that happen.

"That will be a discussion that we will need to have with RUPA (Rugby Union Players' Association) around whether the code of conduct is delivering the best outcomes from a financial delivery viewpoint.

"That will be something that we'll be looking to discuss with them as we come to a new collective bargaining agreement."

Castle explained RA couldn't insert a specific social media clause in Folau's last contract as it wasn't part of the existing CBA between RA and RUPA.

'"We can't just insert clauses whenever we feel like it," she said.

'Even if we had a (social media) clause who knows where this could have gone from a legal perspective?'

Asked if the CBA could be updated in future to keep pace with the development of social media Castle replied: "I certainly think those are the types of things that CBAs need to include and as time changes and social media does become more focused."

Folau has been all but ever-present in the Wallabies number 15 shirt since switching to rugby union from Australian Rules in 2013 and scoring two tries on his test debut against the British and Irish Lions.

He has scored 35 more tries in 72 tests since and helped Australia to the final of the 2015 World Cup in England, where they were beaten by New Zealand. 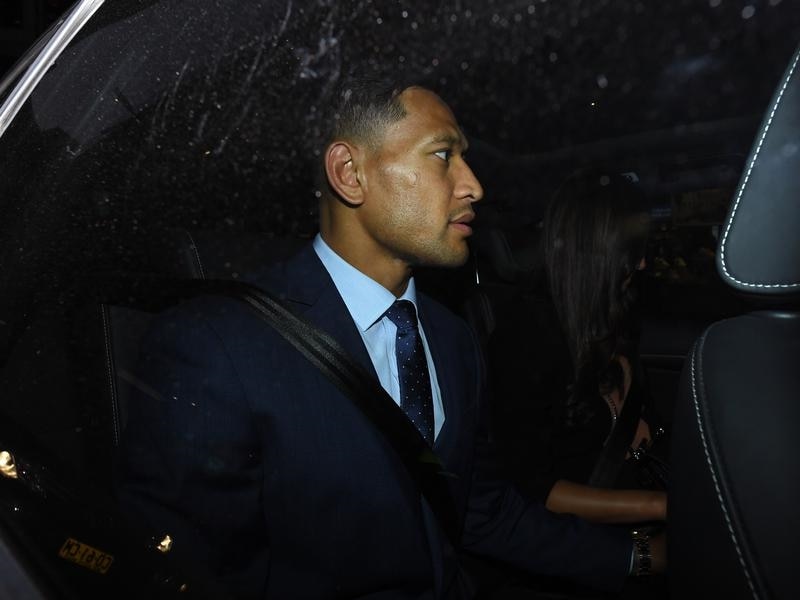 Israel Folau has acknowledged to a Sydney church service his rugby career could terminated. (AAP)
AP

An elusive and dangerous runner, Folau helped the Waratahs to the Super Rugby title in 2014 and only last weekend became the highest career try-scorer in the competition when he crossed for his 60th five-pointer.

Folau has had previous lucrative offers to play in Europe and Japan but his stated desire to remain in Australia makes his most likely destination a move back to rugby league, a code in which he represented Australia at the start of his career.

Rugby Australia's Raelene Castle told reporters on Friday the incident created "unwanted disruption" in an important year for the sport.

"Our clear message today is that we need to stand by our values and the qualities of inclusion, passion, integrity, discipline, respect and teamwork," she said.

Ms Castle said she had been in contact with players directly to ensure they know the organisation supports "their right to their own beliefs". "When we say rugby is a game for all, we mean it.

"People need to feel safe and welcoming the game, regardless of their race, background or sexuality."

Raised as a Mormon, Folau moved to a Pentecostal church in 2011 and has made no secret of his religious beliefs since.

He was a critic of the proposal to make same-sex marriage legal in Australia before it was passed in 2017 and last year took to Instagram with his first post about gay people being destined for hell.

Castle said then that RA "accepted" his position that he had just been expressing his beliefs and had not intended to "upset people intentionally or bring hurt to the game". His controversial post, which took the form of a meme based on verses from the Bible, said gay people and others he perceived to be "living in sin", including "drunks", "idolaters" and "atheists", would be condemned to hell.

The post drew widespread condemnation from around the world with New Zealand Prime Minister Jacinda Ardern among those criticising Folau for the way he was using 'his platform'.

Japan rugby captain Michael Leitch posted a video on Instagram in which he said Folau's comments were "wrong on so many levels" and could be "a real stab in the heart" for people struggling with their mental health.

Bit of interest in the Israel Folau verdict, due in minutes @SBSNews pic.twitter.com/PwAFIaIidw

The RA and Waratahs statement on Thursday said they wanted rugby to be a sport that unites and welcomes people regardless of their "race, gender, religion or sexuality".

"No language that isolates, divides or insults people based on any of those factors can be tolerated," it said.

Pride in Sport, which works to make Australian sport inclusive for LGBT people, later welcomed the decisive action taken by Castle and Hore.

"This unprecedented course of action sends a strong message of what will and will not be tolerated in rugby – and they've made it clear that homophobia and transphobia has no place in the sport," said Andrew Purchas, founder of the Sydney Convicts, Australia's first and most successful gay rugby club.