About a thousand activists were marching in the centre of Santiago when riot police moved in to disperse the protest with water cannons and tear gas. 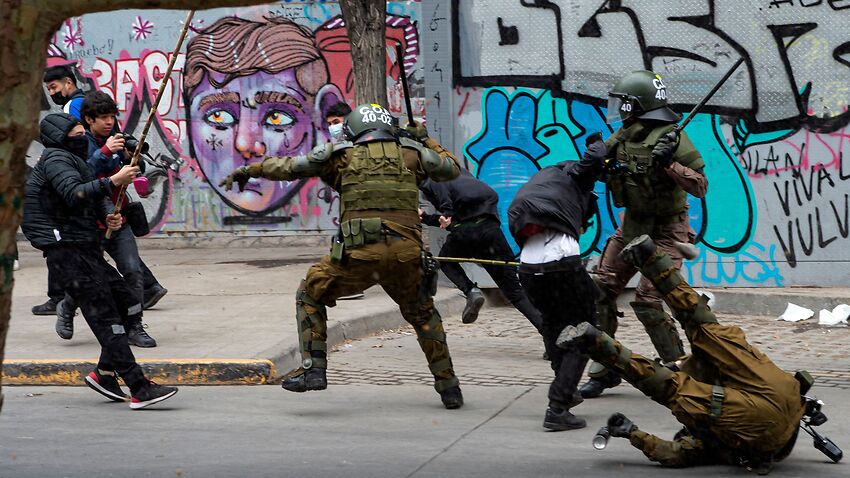 Riot policemen clash with demonstrators during a protest of Mapuche Indigenous people in downtown Santiago, on October 10, 2021. Source: AFP

Riot police clashed with protesters in Chile on Sunday during a rally by the Indigenous Mapuche community, leaving 18 people injured and 10 arrested, authorities said.

About a thousand activists marched in the centre of Santiago, many wearing ponchos and traditional head ornaments, demanding autonomy for the Mapuche, when police moved in to disperse the protest with water cannons and tear gas.

Protesters responded with sticks and stones in a confrontation that lasted about 40 minutes, according to an AFP photographer at the scene.

Mapuche Indigenous people protest in downtown Santiago, on October 10, 2021, amid the commemoration of the Day of the Race. Source: AFP

Chilean police later said in a statement that one woman and 17 police officers were injured in the confrontation and 10 people were arrested.

The Chilean state has long been accused of discrimination against the Mapuche people, the country's largest Indigenous group, who centuries ago controlled vast areas of Chile but have since been marginalised.

Considered the earliest inhabitants of parts of Chile, the Mapuche fought against the Spanish conquerors and later the Chilean army after the country's independence in the 19th century.

Their numbers were reduced to only 700,000, a fraction of Chile's current population of 17 million.