A Chinese-Australian dissident artist believes a “storm is coming” after revealing his identity for the first time on the 30th anniversary of the Tiananmen massacre.

Despite boasting more than 30,000 followers on Twitter, Badiucao - who was born in China but now lives in Melbourne - has always kept his identity hidden for fear of reprisals from the restrictive Chinese government.

“It is important for every artist to join in and do more work about the real world, the human condition, I believe it is crucial for us to be the front line in defending freedom of speech,” he told SBS News on Wednesday, the day after his identity was revealed. Chinese-Australian artist Badiucao has revealed his identity for the first time.
Supplied

“But of course, doing this as a Chinese-born artist, I am facing a lot of risks, persecution and harassment from Beijing.”

The 33-year-old’s art deals almost exclusively with human rights and censorship in China, with his many political cartoons depicting Beijing’s politicians and imagery associated with the 1989 Tiananmen Square protests.

His anonymous political satire has earned him  comparisons to Uk artist Banksy - but he said it has also made him the target of the Chinese Communist Party. One of Badiucao's political cartoons.
Supplied

This became apparent in 2018 as Badiucao was planning his first international show in Hong Kong, which he said was a “testing ground” to see if free speech was still possible.

He said he was forced to cancel at the last minute after the Chinese government discovered his identity and threatened his family in mainland China. 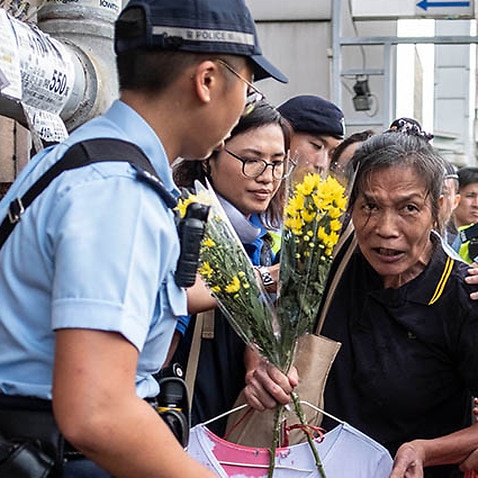 'No longer a safe haven': Fears of China’s growing influence amid Tiananmen anniversary

“[The government] threatened my family in China … and sent a message via them to me saying you have to cancel the show, otherwise we won’t be very kind to you,” he said.

“They also said they would send two policemen to the Hong Kong exhibition, which is putting everyone who is in Hong Kong organising the show into great danger. 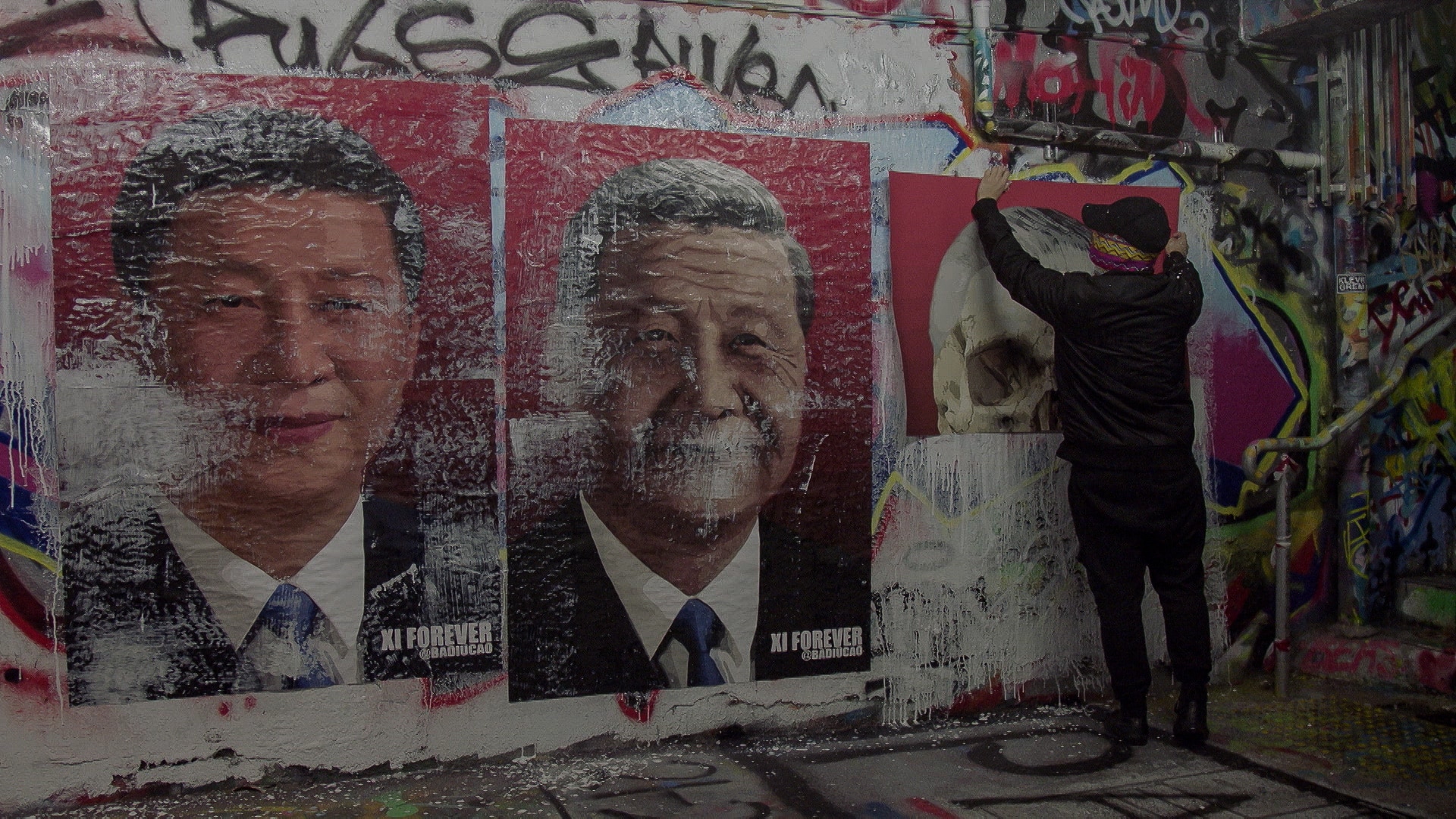 Badiucao pastes up some of his posters at the University of Sydney.
China's Artful Dissident/ABC

Even in Australia he is not beyond the reach of the Chinese Communist Party, he said, claiming to have been followed and targeted by a hacking attempt he believes was aimed at stopping him using the internet.

He said he had also been the target of numerous smear campaigns on social media. The copies of the Badiucao's political artworks are displayed at a bookstore after the cancellation of his exhibition in Hong Kong.
AP

“I don’t really feel face in any place at any moment, even when I am in Australia, my own country as an Australian citizen” he said.

Despite the serious concerns about his safety, the artist now wants to “show his real face to the world”, which he did in an ABC documentary called China’s Artful Dissident on Tuesday

But the artist said he had “no doubt” there will be repercussions.

“I am choosing to step out and show my real face to the world. By confronting the situation face to face, showing the world who I am and sharing my story,” he said. 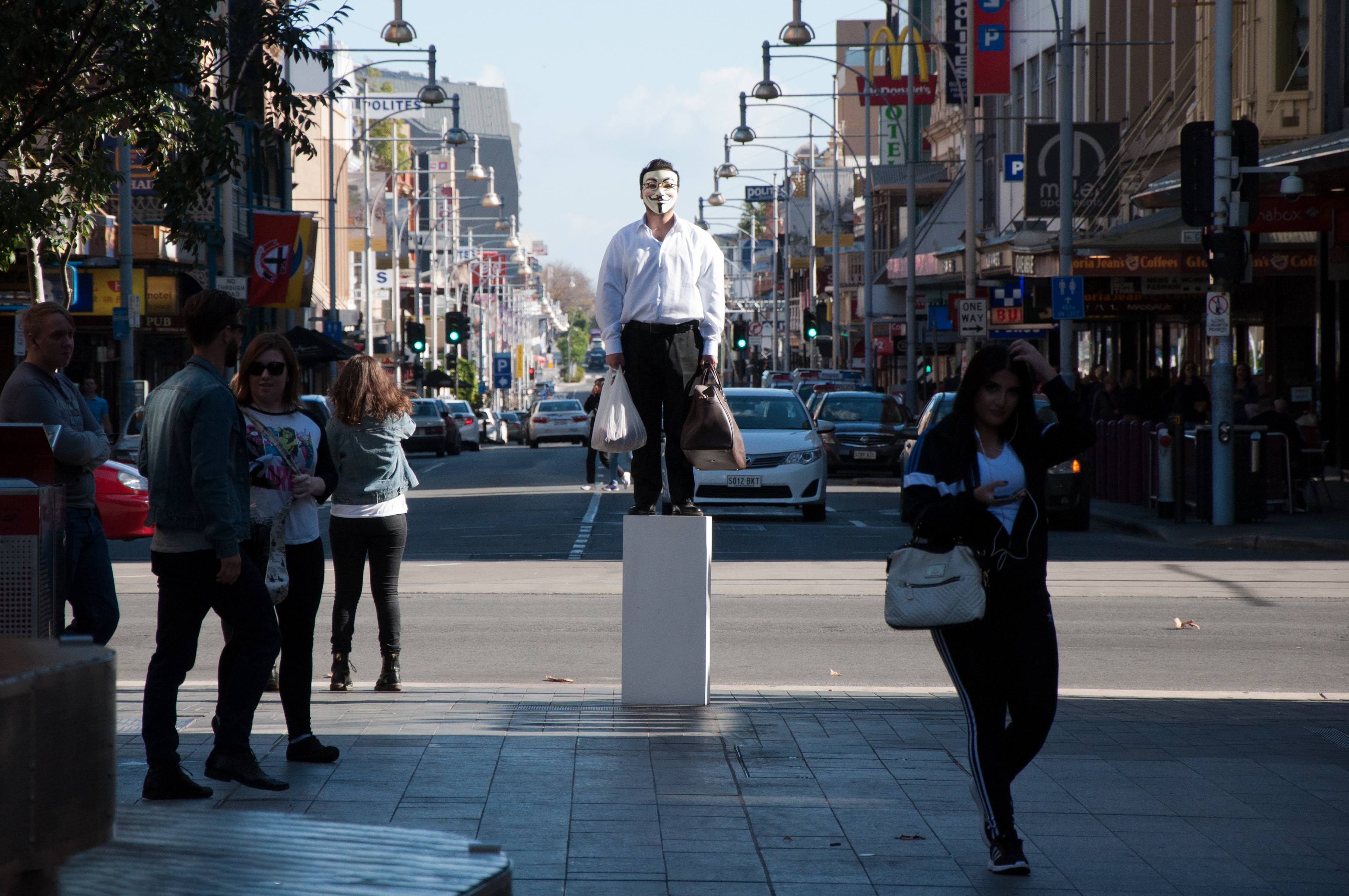 “The storm is coming … I am expecting the storm.”

Badiucao is the latest prominent Chinese artist to be targeted by authorities - in August last year contemporary artist and activist Ai Weiwei posted to social media that his Beijing studio had been demolished without warning.

Weiwei has a long history of clashing with Chinese authorities over his outspoken art.

Chinese activist Wu Gan was sentenced to eight years in jail in December for subversion and had their Twitter account suddenly deleted - erasing more than 30,000 posts representing years of political critique and commentary. Tiananmen Square massacre: The faces of the people holding the Chinese government to account

The revelation of Badiucao’s identity coincided with the 30th anniversary of the Tiananmen Square massacre - a bloody response by the People’s Liberation Army to student-led pro-democracy protests.

After weeks of rallies and hunger strikes, tanks and soldiers opened fire on the student protesters, killing hundreds and injuring many more. In this iconic 1989 photo, a Chinese man stands alone to block a line of tanks heading east on Beijing's Changan towards Tiananmen Square.
AAP/Jeff Widener

The date of his reveal was no coincidence.

“This is my action to dedicate to this anniversary, we are not forgetting what happened in 1989 and the spirit has been carried on with the younger generation,” he said, despite the Chinese government’s efforts to suppress any record of the event.

Communist Party rulers have never admitted guilt for the murders, nor offered an official death toll. 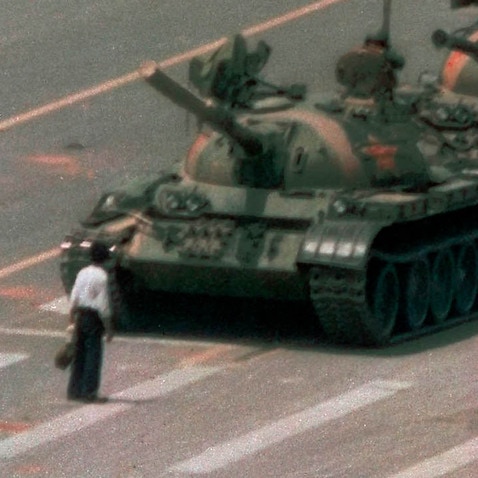 “The Tiananmen movement, the spirit of those young people and, in fact, a lot of other citizens around China is a huge inspiration for me … if they can do that, I can do that too,” Badiucao added.

“This courage, and this idealism, will live forever.”

Queen Elizabeth says 'we will succeed' against coronavirus