China believes artificial intelligence is the way to power its economy forward, and is investing big in nationwide research, especially in the area of 'machine-learning’ where programs use brain-like networks to teach themselves.

The country is hoping to use the technology to transform a variety of industries, including manufacturing, health and transport.

Hundreds of gadgets and must-have electronic devices were on display at Shanghai’s Consumer Electronic Show, or CES Asia.

Among them was a driverless car powered by Baidu’s Project Apollo self-driving car platform. The tech giant is using machine-learning, a new step in artificial intelligence, to develop the technology.

Machine-learning allows computers to learn without being explicitly programmed.

The advance has gotten the attention of the Chinese government, which is spending big in AI. Some Chinese cities are pledging more than $2 billion dollars towards research and development.

Zha Hongbin is an AI researcher and professor at Beijing’s Peking University. He says machine learning has been the focus of many computer labs across China. “Our country is on the way to launch the project Artificial Intelligence 2.0, the launching of which would drive the development of machine learning," he said.

"The Chinese government attaches great importance to this area.”

Mr Zha says China hopes to leap-frog the US and other western countries by vast and fast investment in the industry.

“We still lag behind in some traditional industries," he said.

"When it comes to emerging industries we see an opportunity to be more advanced. And AI, we believe, would play a crucial role in this process.”

The technology was behind the triumph of google’s AI program ‘AlphaGo’ in the highly complex Chinese board game Go last month. The program bested world champion Ke Jie in three games.

But the technology has more serious applications. Earlier this year tech giant Baidu worked with a charity to use facial recognition to help identify two missing persons, one who had been trafficked from home 28 years ago.

"Using our technology we can actually detect the problems much earlier and I think that’s the part in which we can save a lot of lives.”

With their program installed in 20 hospitals across China, the start-up are now expanding to the US and Japan and developing programs to help doctors analyse images of the heart, brain and stomach.

Mr Chen says his goal isn’t to replace doctors or radiologists, but allow them to work more efficiently. 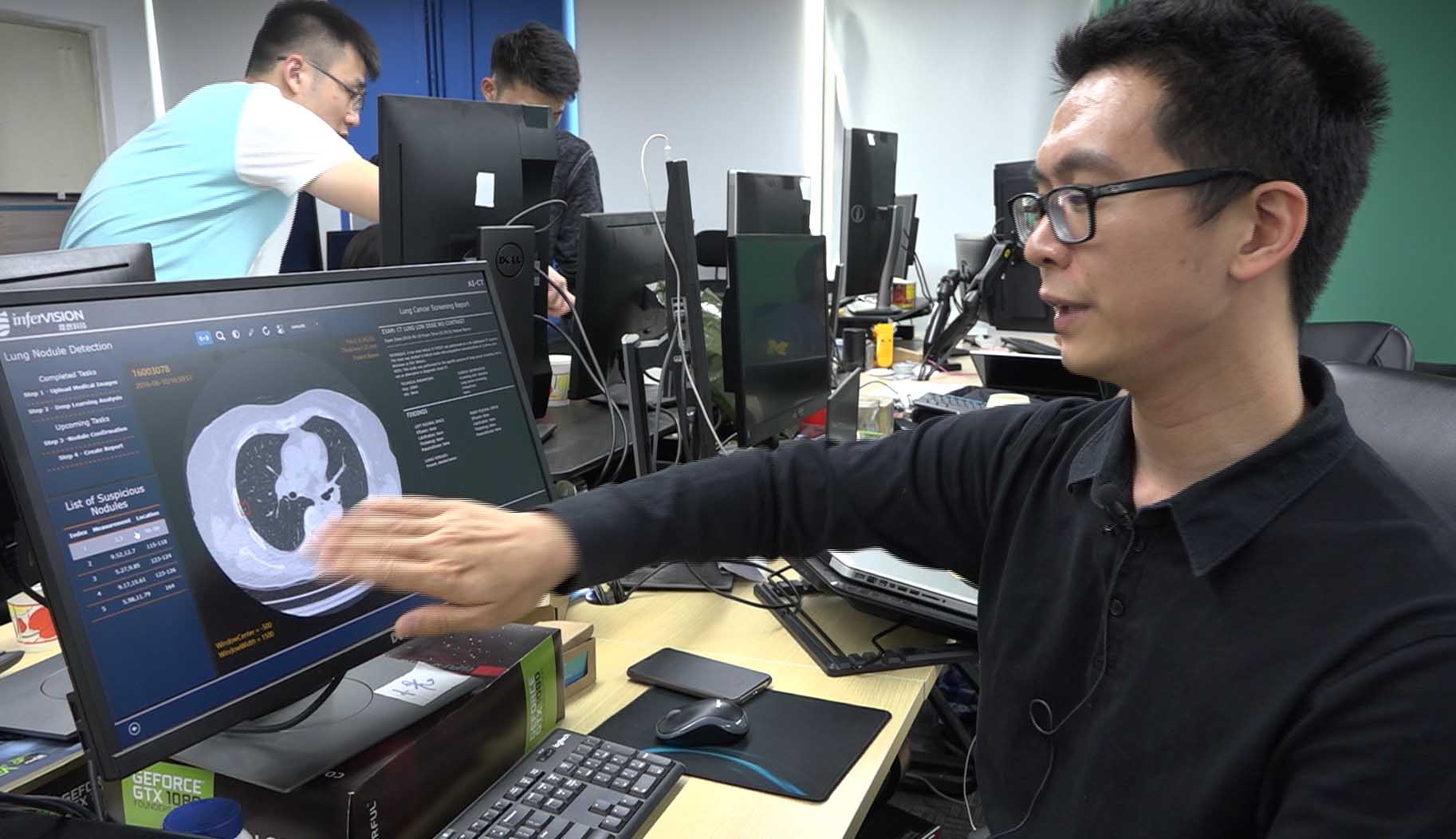 “We can use deep-learning technology to remove parts in which they do repetitive and tedious work,” he said.

But some believe job losses are inevitable. Technologist and venture capitalist Kai-fu Lee predicts AI will replace 50 per cent of all jobs over the next decade.

Zha Hongbin says manufacturing and transportation and will be especially affected, but changes will be good for the economy overall.

“There will be some other industries emerging in markets like China and these emerging industries may employ more people,” he said.

On a consumer-level, robot company Roobo believes most AI gadgets are in their infant-stages. They’re produced three models which are intentionally designed to look ‘cute’.

“If you design the interface to look too high-teach or intelligent the users may have too high expectations," Roobo’s chief technology officer Lei Yu said.

"We aim to eventually create a human-like interactive robot, but we can’t achieve that yet.”

Domgy, an interactive dog-like prototype, will go on the market for more than $1000 at the end of the year.

The price point is unaffordable for most in China, but the company hopes within five years the technology will have advanced enough to push prices down.