Despite a shake-up of China's marriage law last month - and a groundswell of support for same-sex unions in the socially conservative country - demands to make gay marriage legal have not been met.

Engaged for over three years, Guo and Zhu are fed up waiting for Chinese lawmakers to approve same-sex marriage - instead, they have turned online to gain recognition for their relationship.

Despite a shake-up of China's marriage law last month - and a groundswell of support for same-sex unions in the socially conservative country - demands to make gay marriage legal have not been met.

The two men joined thousands of other couples announcing their "wedding" through an app where same-sex couples are given an unrecognised marriage certificate to share with friends, colleagues, and the public.

"We can't live in the shadows anymore," artist Guo told AFP, using only his surname.

"My partner's family is still coming to terms with it." A Chinese couple toast each other during their 2012 public wedding ceremony at a hotel in Tuorong, in southeast China's Fujian province.
AFP

In China only couples who have tied the knot can adopt children, access fertility services or jointly buy a house.

Legalising gay marriage was among top suggestions made by the public last year when lawmakers sought opinions on the country's first-ever civil code.

But a dismayed LGBTIQ+ community has been left to redraw their battle plans after the text of the code - which governs everything from property contracts to adoption - defined marriage as "a union between a man and a woman". After the civil code legislation was approved, Sun launched his WeChat "wedding" app to raise the profile of gay relationships. More than 3,000 couples have used it so far to get the unrecognised marriage certificates.

"We’ve been together for over a decade... but we can't take leave to take care of our sick partner or their parents the way straight couples can," Guo said.

"The right to marry is a recognition that same-sex relationships are equally important."

China decriminalised homosexuality in 1997, and officially removed it from its list of mental illnesses in 2001.

But in recent years, censors have muted discussions on social media, banned homosexuality in films and even prevented the sale of rainbow-themed items online.

Hundreds of thousands wrote their personal stories and sent them to lawmakers as they pushed to influence changes to the marriage law - a type of civic movement "quite rare in China", Mr Peng said. 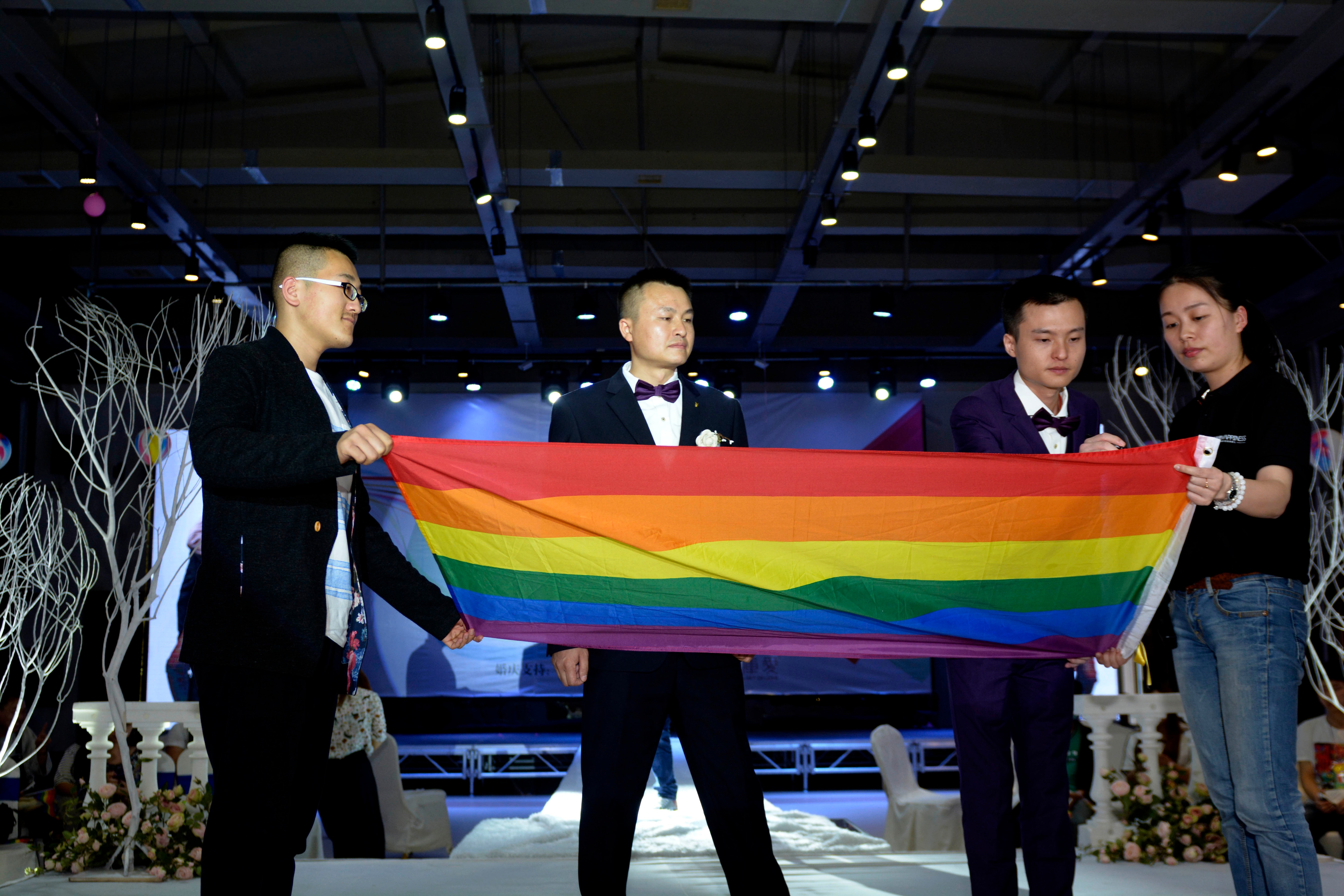 Hu Mingliang and his partner Sun Wenlin sign on a rainbow flag during their legally unrecognised wedding ceremony in central China.
AFP

Yan Shanshan was among the letter writers, who shared her wish to marry her girlfriend. One line from her mother read: "We have accepted our daughter’s choice, why can't you?"

Messages also came from professionals who had hidden relationships from employers, and from same-sex couples looking to become parents.

Those who want to have a child in China are forced to seek fertility treatment or surrogates abroad, which is prohibitively expensive. But the mass outpouring fell on deaf ears.

"It's all been copied and pasted," said parliamentary official Huang Wei from the Legislative Affairs Commission.

"The letters sent to us came in the same envelope, with the same content, and the online messages were the same," he told state media last month.

The comments stoked further anger in the LGBTIQ+ community.

"If they (the lawmakers) respect public opinion, they should carefully investigate and study it, even if they disagree... and tell us why they disagree," Mr Sun said.

"People don't feel respected by them."

Same-sex marriage could also solve challenges around owning property, as in Chinese law only married couples can have two names on a housing deed.

He Meili quit her job to nurse her sick partner for 12 years until her death in 2016, but then found herself homeless.

"Within a week, her parents wouldn't let me live in the house where we lived together," she told AFP. She lost in court after the judges refused to recognise her relationship.

One silver lining in the civil code is the "right to reside" clause, allowing a property owner to grant another individual the right to live in a property for a lifetime.

This could offer rare protection for same-sex couples.

"At least people can find some legal basis to protect some of their rights and interests," Ms He said.

Activists are also conducting a nationwide survey of LGBTQ couples to create a "gay rights resource with Chinese characteristics".

"There aren't enough studies on the lives and difficulties facing sexual minorities in China," and that, Mr Sun said, hampers "understanding of the community's problems."