A Chinese embassy official has appeared on ABC's Q&A program, defending the Chinese Communist Party's response to the coronavirus outbreak and the mass imprisonment of Muslim minorities.

China's deputy ambassador to Australia has used a live appearance on ABC to deny that the country's government attempted to suppress the existence of the coronavirus weeks before the deadly epidemic was widely identified.

In a rare appearance from the Chinese government on Q&A, Minister Wang Xining said the Chinese Communist Party (CCP) had handled the outbreak, which has so far killed more than 2,500 people, effectively and dismissed suggestions that early whistleblowers were silenced.

"I don't think there is a cover-up. It is a very sophisticated issue. It involved a lot of agencies and expertise."

Why has the communist party locked up one million Uyghurs, and when can Uyghur Australians like Sadam and Almas expect to see their families again? #QandA pic.twitter.com/HxRU6MNM26

A doctor in Wuhan initially raised the alarm about a new "SARS-like" disease with a group of doctors on WeChat in late December, weeks before it was publically announced, but was rebuked by local police for "rumour-mongering".

Li Wenliang, 34, was one of eight whistleblowers who tried to warn other medical professionals of the virus, the state-run Global Times newspaper said.

Earlier this month, Dr Li died from the coronavirus - now known as COVID-19 - sparking an outpouring of grief and calls for free speech on Chinese social media.

Minister Wang described the doctor as "very respectable", telling the panel that anyone who interfered with the control of the crisis would be "dealt with by the party or national law".

He described "several high-level people" who had lost their jobs due to their approach to the outbreak, but this was disputed by other panellists.

Is China’s dissatisfaction towards Australia’s travel ban warranted, when mainland China has itself locked down whole cities? #QandA pic.twitter.com/2tpSled04C

Minister Wang also defended actions to forcibly remove people suspected to have contracted the virus from their homes, after a user-generated video of people being dragged away by authorities was shown in an earlier broadcast of Four Corners.

"Most of the Chinese people are good people. They're willing to sacrifice their immediate pleasure and personal income for the greater good," he said. "If we let these people out ... those people who were infected, what do you say to that?"

The World Health Organization (WHO) has declared the coronavirus an international emergency, with more than 77,000 infections across at least 28 countries. 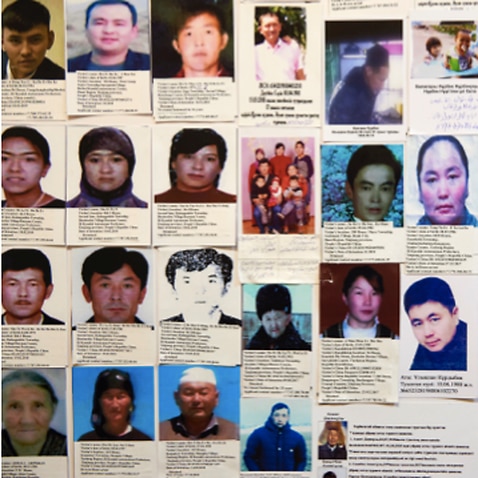 The vast majority of infections and deaths have taken place in the central Hubei province, where the virus is believed to have originated at a seafood market in Wuhan city.

"It's unprecedented and challenging in human history. It's an unprecedented campaign. Organised by the Chinese government, against an epidemic which is a common enemy of mankind," Minister Wang said of the CCP's wide-reaching efforts to stem the spread of the coronavirus, including a lockdown of millions of people.

"The sacrifice China has done is for the benefit of the world."

'There's a lot of fake news running around'

In response to a question from a man identified as an Uighur-Australian who asked why his son and wife were being barred from leaving China's Xinjiang region, Minister Wang denied that the mother and child wanted to come to Australia despite the ABC previously publishing video of them pleading to be allowed to leave.

"There's a lot of fake news running around," he said.

Minister Wang also alleged that many of the Uighur people currently detained in secretive "training centres" were there voluntarily because the Xinjiang region "was contaminated by terrorist and radical ideas".

This is untrue. @AlmasNizamidin wife and @SMusapir family are desperate to reunited in Australia - we can verify this #qanda

The United Nations has estimated that more than one million Uighur's and other Muslim minorities are being held against their will in internment camps throughout the north-west of the country.

Internal government documents leaked last week appeared to show the detailed reasons why 331 Uighur's from Karakax County in Xinjiang were sent to the camps, including what members of the Muslim minority eat, wear and when they pray.

Foreign Minister Marise Payne has repeatedly said she has Australian concerns about the reports of mass detention with the Chinese government, describing reports about the situation as "disturbing".

"Madam Payne was misinformed, her views are sometimes on the Western media's portrayal of the issue," Minister Wang said. "It's a training centre. People get to be prepared for future jobs."