Industry Minister Christian Porter's defamation case against the ABC has been adjourned while the court considers whether his barrister has a conflict of interest.

Federal minister Christian Porter's defamation case against the ABC has effectively been frozen until a judge decides if one of his barristers, Sue Chrysanthou SC, has a conflict of interest.

One of Sue Chrysanthou SC's former clients made an urgent application to the Federal Court on Wednesday to have the senior counsel restrained from acting for the former attorney-general. 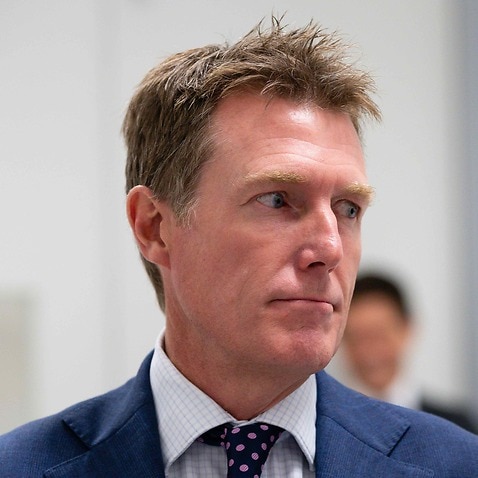 The former client, Jo Dyer, has cited concerns that confidential information she shared when retaining Ms Chrysanthou in a previous separate matter will or could be used in the Porter-ABC case.

Justice Tom Thawley has scheduled the Dyer-Chrysanthou matter for a three-day hearing beginning May 24.

Justice Jayne Jagot on Friday adjourned a case management hearing in the Porter-ABC case until May 26 to ensure the substantive proceedings were "protected".

She didn't, however, order a stay of proceedings or order Ms Chrysanthou to be "quarantined" from the case, as earlier proposed.

That pair of options was fiercely opposed by Mr Porter's other senior counsel, Bret Walker.

"I have myriad secrets from myriad people," he said.

"The notion any one could come out and say 'I don't want you to appear in a case in which I'm not a party because you have my secrets' is self-evidently absurd."

Depriving Mr Porter of one of his chosen barristers based on an application of which the primary judge had "no information whatsoever" would set the "most dreadful precedent", he said. The now-industry minister is suing the ABC and journalist Louise Milligan for defamation over a February 26 article concerning a historical rape allegation against a cabinet minister who the article did not name.

Mr Porter, who strongly denies the allegation, alleges he was widely identified as the subject of the article and has accused the public broadcaster of leading a determined campaign against him.

The ABC denies Mr Porter was identifiable, but in any case argues Mr Porter can reasonably be suspected of raping a 16-year-old girl.

The former attorney-general's bid to have large portions of the ABC's defence thrown out will be heard on the first two days of June.

Ms Chrysanthou had prepared Mr Porter's statement of claim, his reply, submissions to strike out the defence and other documents.

Brittany Higgins is hopeful for reform after talks with Scott Morrison

One could infer she had also prepared or overseen case management orders sought in Friday's hearing, Mr Gleeson said.

"If a lawyer has taken on that conflicting retainer and - consciously or otherwise - remembered or otherwise used information from that first client in the drawing of the pleading in the second matter and/or the prosecution of that matter ... then depending on those findings, it may be open to considering if there has been an infection of the material presented to the court in the second matter," he said.

Justice Jagot found the ABC's reasons to adjourn "compelling" and cited a risk in her mind of "adding more eggs to the bowl" when the eggs were already scrambled.

In the Dyer case, Justice Thawley on Friday heard numerous factual issues were in dispute including whether there was ever a retainer and whether a supposed discussion was confidential.

Despite the delay, the eventual Porter-ABC trial could be heard as early as September 27.

Justice Jagot said she preferred a start date of October 5 for undisclosed reasons, while also leaving November and December kick-offs on the table.