Weeks out from a global day of strikes by students and teachers, the church presiding over some of the country’s most elite Sydney schools has endorsed a day of protest over climate change policy.

The Uniting Church Synod of New South Wales and the Australian Capital Territory is offering staff the day off - and backing its members, which include some of Sydney's priciest private schools, who choose to do the same.

Reverend Simon Hansford told SBS News that while not all of the Church's members supported the strike, he was compelled by young students who feel a state of despair over the earth's future. Among the seven private schools the Synod oversees are Pymble Ladies College and Knox Grammar - private institutions with some of the heftiest tuition price tags in the country.

These institutions on Sydney's Upper North Shore are blue-ribbon territory for the Liberal Party, but on this issue there is much opposition. The Uniting Church Synod that covers the area noted one of its young members pointed to "an alarming lack of care by the government".

"There are some who don't agree - but this is how the gospel calls us. It calls us to be good stewards of the world around us. This is surely a reflection of that," Reverend Hansford said.

The Federal Education Minister did not respond to SBS News' inquiries by deadline. 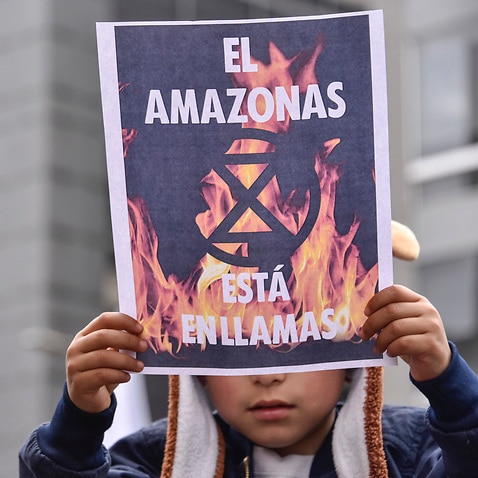 In March, tens of thousands of students around Australia took to the streets to call for action on climate change, including institutional divestment from the fossil fuel industry, a ban of the creation of further coal exploration and a program to transition workers to sustainable industries. Climate activists attend a Fridays For Future strike for climate protection that is part of 'SMILE for Future' event.
LightRocket

"I am a father and we want to encourage our kids to be leaders, we want to affirm that sent of leadership and prophetic voice. In many ways adults have failed on this," Reverend Hansford said.

Our responsibility as human beings and people of faith is to care for humanity and the earth - it is the same thing. I would encourage all of us, people of faith or not to come together in action for the next generation.