Lawyers have launched a class action investigation into what they believe could be hundreds of "unlawful" strip searches of music festival patrons by NSW Police. 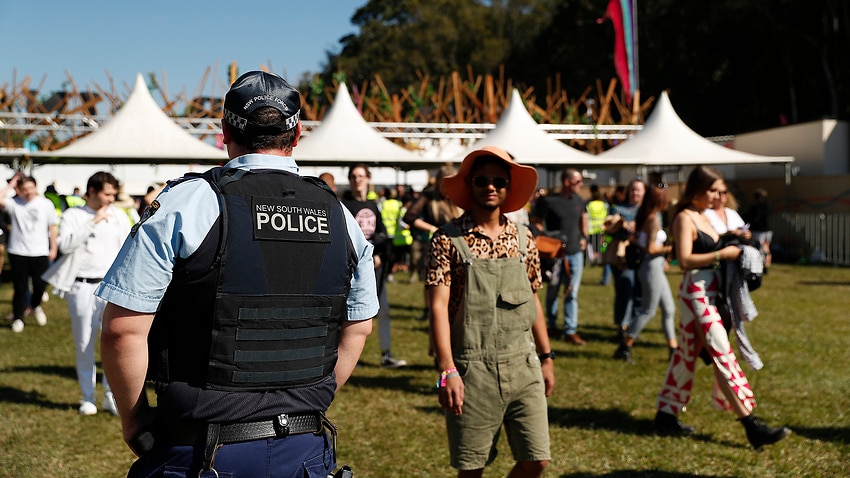 Police officers and drug detection dogs walk amongst festival goers by an entrance to Splendour In The Grass 2019. Source: Getty

Lawyers in New South Wales have announced they are investigating a possible class action over what they say could be "hundreds" of unlawful strip searches of music festival patrons by NSW Police.

“Hundreds of people are believed to have been unlawfully searched at the Splendour in the Grass music festivals in 2016, 2017, 2018 and 2019,” Slater and Gordon and Redfern Legal Centre said in a joint statement released on Tuesday.

Redfern Legal Centre’s principal solicitor Alexis Goodstone said the “ground-breaking class action will seek redress for the many people subjected to invasive and traumatic searches”, describing unlawful searches by police as a systemic problem that needs to be urgently addressed.

Slater and Gordon and Redfern Legal Centre urged “anyone searched by NSW Police at those festivals – including those asked to lift or remove clothing during a search, or who had police peer into their trousers or look under their tops” to register with them to find out how the potential class action might affect them.

“People affected by serious breaches could potentially be entitled to tens of thousands of dollars each,” they said.

An unlawful police search is “classified by law as an assault and gives rise to compensation”, Slater and Gordon senior associate Ebony Birchall said.

“We believe that hundreds of people who were searched by police at Splendour may have been subject to unlawful searches and therefore may be entitled to compensation,” Dr Birchall said.

“Some festivalgoers searched by police – including people aged under 18 – were allegedly directed to lift or remove items of clothing, strip naked and squat and cough, or lift their genitals so officers could visually inspect body cavities.”

NSW Police said the force "is aware of media reports from 18 months ago that a class action was planned. To this date no class action has been filed with the courts".

"The test on whether a search was conducted lawfully is ultimately a matter for the Court. Police are required to suspect on reasonable grounds that the circumstances are serious and urgent when determining whether a strip search is necessary," NSW Police's statement said.

"When making that determination, police will consider all of the available information, including the risk of someone overdosing or dying.

"The Law Enforcement Conduct Commission has acknowledged the significant improvements the NSWPF has made in the education, training and guidance to police in carrying out searches."

Splendour in the Grass co-founder Jessica Ducrou said the festival “had no insight into NSW Police search processes at our festivals” and “support our patrons who wish to come forward to call out and help stop unlawful conduct”.

“We do not support drug dog operations as a method to manage a broader societal challenge that extends well beyond the context of a music festival,” she said.

‘The whole experience was extremely traumatising’

Slater and Gordon and Redfern Legal Centre shared the story of their client Ruby*, who says she was “traumatised” after being “unlawfully searched” at the 2017 Splendour in the Grass festival when she was 23 years old.

“The way I was treated by police was disgusting. The police presumed I was guilty, and I was treated like a criminal without any justification,” she said in a statement released by the lawyers.

Ruby said she was entering the festival from the campground on 21 July 2017 when two police officers, who had a drug detection dog, took her into a tent where they were searching people.

“When I protested, they told me that if I didn’t co-operate with the search in the tent, then they would take me to a police station to be searched. I didn’t want to be taken to a police station, isolated from my partner and friends, I was already very frightened. I asked for my partner to stay with me and support me during the search, but it was refused. My partner was then repeatedly ordered by police to move on,” she said.

“I was searched by a female senior constable and her conduct was unprofessional. The way she spoke to me was condescending and patronising, for example, she repeatedly told me: ‘The process will be made easier if you tell me where you are hiding the drugs'.

“Each item of my clothing was intentionally thrown on the wet and muddy ground by the officer, and I was forced to strip down.”

Ruby said that at “one point during the search, a male police officer opened the tent and stared at my naked body”.

“In response, I turned away to hide my body and alerted the female officer that he was watching. She claimed no one was watching and continued searching me, when I could clearly see that the male officer was still looking through the tent.

“The whole experience was extremely traumatising, especially due to the way the police presumed I was guilty and the way I was both spoken to and physically handled. I felt violated because the male officer stared at me while I was naked.”

Ruby said she was “so traumatised that I returned to my campsite and changed every item of my clothing, which was also necessary because my clothes were wet and muddy after being thrown on the ground by the police officer, except I kept my socks and the handbag that contained my insulin”.

Strip searches by NSW Police have been the subject of ongoing debate. Source: AAP

“Around 5pm the same day, while I was attempting to re-enter the music festival again, my jacket was grabbed from behind by a male police officer who I saw signalling the drug detection dog to come and sit at my feet," she said.

"I believe the male police officer told the dog to sit because I looked nervous due to my previous experience earlier that day. I told him I had already been searched that day and I asked him what the limit was on the number of times an individual could be searched within 24 hours, he told me: ‘unlimited’.

“I said if you’re going to search me again, can I at least have the same officer perform the search. Without any effort to honour my request, the officer told me no, she’s busy.

“Then I was taken to the same tent, told to strip naked and was searched for the second time in the same day. Again, I had no drugs on me, I had not taken any drugs, I had not touched any drugs and there was no way my clothing could have made contact with drugs.”

Ruby said she wanted to be involved in the class action case to “speak up for myself and for others because this should not be allowed to happen”.