Australia's wine industry is on the frontline of climate change, and scientists are warning the increasing challenges to grape-growing reflect the vulnerabilities of the entire farming industry.

"When people ask me 'have you got a good example of climate change?' - I say 'talk to a viticulturist'."

Those are the words of Christopher Davies, a senior research scientist at the CSIRO.

He explains grapes are extremely sensitive to heat, which means the effects of a warming planet are felt sharply in the wine industry and have been for a number of years.

"It's an extremely concerning problem for viticulture in Australia," fifth-generation winemaker Alisdair Tulloch tells SBS News during a visit to his family-run vineyard this week. Fifth-generation winegrower, Alisdair Tulloch says the effects of climate change are being felt sharply in the industry.
SBS

Out at Keith Tulloch Wine, in the NSW Hunter Valley, the soil is bone dry. The ongoing drought has grape growers in one of Australia's major wine regions bracing for yet another challenging harvest season.

"The extreme drought has affected the yields on some our vineyards - some dropping beneath 25 per cent of what they had previously yielded," Mr Tulloch said.

"The heatwaves are my primary concern, leading into it from a very dry winter, into what is forecasted to be a very dry spring," The ongoing drought has grape-growers in the Hunter Valley bracing for yet another challenging harvest season.
SBS

He says summer heatwaves have become the new normal and it is impacting grape-growth at an alarming rate.

"Shiraz would be typically harvested around the end of February and beginning of March. I can't remember a year in the last three or four years when we haven't picked some Shiraz in January.

"Lots of fruit comes in faster with a shorter window to pick all the fruit. It causes a lot of logistical headaches and it really is unsustainable when you think what that will look like in 10 to 20 years." It's the same story for grape growers in South Australia, including David Bruer, who has been making wines since the 1970s.

"We have very good records of our harvest days going back to the mid-'80s and what we've found is that our vintage is advancing by point eight of a day per year, and that means that we are a month earlier than when we first moved to this property." Scientists warn the increasing challenges to grape-growing reflect the vulnerabilities of the faming industry as a whole.
SBS

He says the dramatic shift in harvest dates is taking a toll on his business.

"It's putting a huge strain on our resources for both fermentation space but also for refrigeration. And also for labour because the work is all happening over a much shorter period, it’s harder for us to physically manage the labour, we've had to hire more people for a shorter time."

In some cases, companies have moved production to cooler climates, including Tasmania.

With climate change presenting an increasing threat, winemakers are being forced to adopt new measures to combat the challenges.

"We've invested a lot of money in irrigation in our vineyards which previously weren't irrigated and that's been a response to more frequent and more intense droughts," Mr Tulloch said.

Some, including Mr Bruer, are diversifying their variety of grape.

"Varieties which use water more efficiently or are able to handle low-water conditions in high growing temperatures," he says.

And despite the dry conditions leading to smaller yields, figures from Wine Australia released last month showed reveal the overall value of wine exports continued to grow - up by four per cent in 2018-19 to reach $2.8 billion. David Bruer has been making wines since the 1970s.
SBS News

Going carbon neutral is another strategy helping mitigate the threats. Mr Bruer has made the switch, and so too has the Tulloch business.

An important step, Alisdair Tulloch says, given that the agricultural sector is a significant contributor to Australia's emissions.

But the benefits are two-fold.

"[It's] a really good solution farmers can have in addressing their impact of the climate, but also addressing some of the threats that climate change poses to them.

His vineyard is one of just a few in Australia to receive an official carbon neutral certification from the Australian government. It runs off solar power, and uses regenerative agriculture.

It involves planting vegetables and legumes, including radishes, peas and barely, in the mid-rows of the vines in order rebuild soil organic matter, which both addresses the climate crisis and helps alleviate the impact of the drought.

"These [radishes] are nitrogen and carbon generating machines. We grow these so they will breakdown in the soil and provide the plants with the nutrients that will help them survive through periods of stress and hopefully we can store more water in the soil through great soil organic carbon." 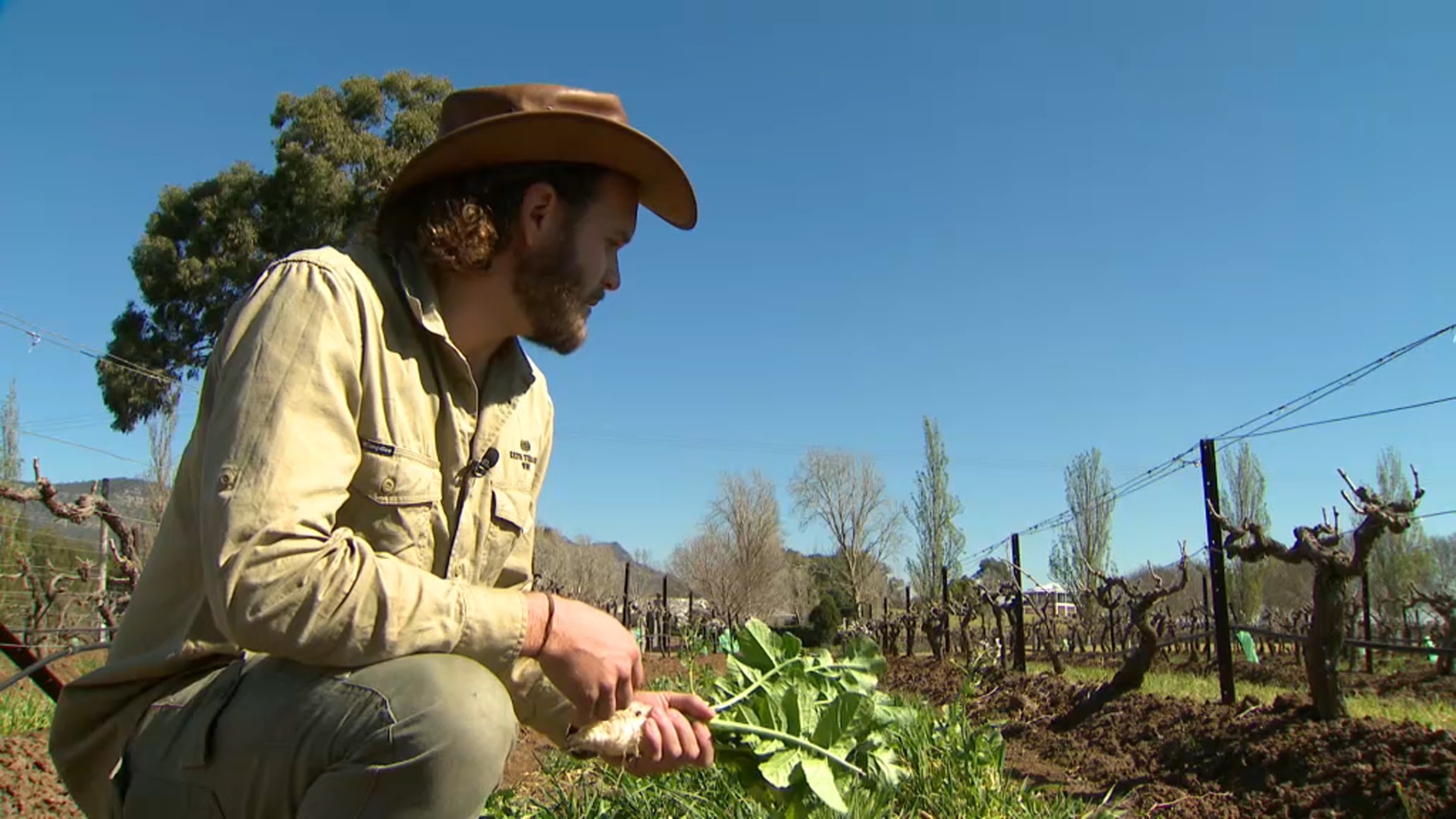 Alisdair Tulloch is using regenerative agriculture, both to which both address the climate crisis and alleviate the impact of the drought.
SBS
But, he warns, these are temporary fixes and a long-term solutions are needed. That is something both the industry and government are working towards.

Christopher Davies is part of a new project between the CSIRO and Wine Australia that aims to adjust wine grape ripening to suit a changing climate.

"The work is concerning understanding and controlling ripening, so we are looking at how ripening is controlled and whether we can manipulate ripening for the benefit of the industry," he said.

Climate scientists warn the increasing challenges to grape-growing reflect the vulnerabilities of the entire farming industry.

"Climate change is already [having] an impact, not just based on the amount of product that they can grow, but also on the quality of product." Chinese investment in Australia's wineries on the rise

He says while it is encouraging to know solutions are being mapped out, there needs to be a clear national strategy, not just for the wine industry, but for the entire agricultural sector.

"We do have good solutions in terms of that comprehensive approach but they’re not necessarily joined up well at the moment, nor do we have joined up actors, in the sense of connecting the national policy context through to individual action on farm."

Next month, a delegation farmers will visit Parliament House in Canberra calling for a national strategy on climate change and agriculture. Mr Bruer says the government is helping the industry but urged it to do more.
SBS News

The Australian government told SBS News it supports the sector through a range of measures which seek to deliver increased productivity, profitability and climate preparedness.

David Bruer agrees that the government is taking action.

"They support a lot of research. The government is not doing nothing."

But, he adds, it needs to better acknowledge the current reality of climate change in order to create meaningful change.

"I think my main criticism with our government is they don't seem to believe climate change is real - it is."