Clinton Pryor took the first steps of his walk for justice in Perth last September, and one year later has taken the final steps at the Aboriginal Tent Embassy in Canberra.

The 27-year-old walked almost 6000km across the country for Aboriginal rights, arriving in Canberra on Sunday morning with a crowd of supporters from across Australia.

He set out on September 8, 2016 and has since taken seven million steps and gone through eight pairs of shoes.

Mr Pryor hopes to meet Governor-General Peter Cosgrove on Wednesday for a one- on-one chat, but he wants Sir Peter to meet with Indigenous elders at the tent embassy rather than Government House.

A corroboree was held at the tent embassy on Sunday afternoon to celebrate Mr Pryor's arrival, as crowds chanted "always was, always will be, Aboriginal land".

He also plans to meet with federal politicians when parliament returns for a fortnight of sitting, to raise awareness for Indigenous issues. 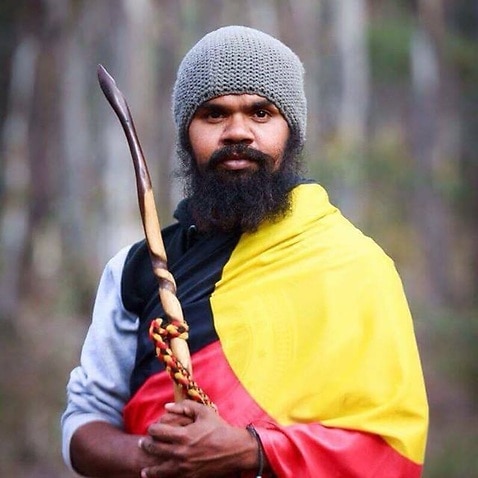 Over the past year he met with Aboriginal elders and community leaders across Western Australia, the Northern Territory, South Australia, Victoria and NSW.

His walk included trekking through the Gibson Desert for two weeks in summer, where he had to walk at night to prevent exhaustion.

The Gundungurra people offer @Clintonswalk a possum skin cloak for the final leg of his amazing walk for justice #ClintonsWalk @NITV pic.twitter.com/McAOuM4P3q

A banner reading "justice for Elijah" was visible in the crowds in Canberra, held by supporters who arrived from Kalgoorlie in Western Australia to support Mr Pryor.

Protests erupted in the WA town after 14-year-old Elijah Doughty died in August last year after being hit by a ute while riding a motorbike.

The 56-year-old ute driver recently stood trial for manslaughter but was convicted of the lesser offence of dangerous driving causing death, and was sentenced to three years jail.

The sentence sparked rallies across the country, with protesters saying the sentence was too lenient.