Tensions have again erupted between Japan and South Korea over the issue of Japan's use of Korean wartime sex slaves.

South Korean President Moon Jae-in said on Thursday that the country's 2015 agreement with Japan to settle a decades-long impasse over Korean women forced into wartime sexual slavery was seriously flawed.

Moon's statement potentially throws the future of the deal in doubt, two years after both countries declared it as "final and irreversible."

The statement came a day after a state-appointed panel concluded that Seoul's previous conservative government failed to properly communicate with the victims before reaching the deal.

The panel also said parts of the deal were not made public, including Japanese demands that the South Korean government avoid using the term "sexual slavery" and provide a specific plan to remove a bronze statue representing sex slaves in front of its Seoul embassy.

South Korea in response said it would formally refer to the victims as "victims of Japanese military comfort stations" but didn't make any clear promise about the statue, according to the panel.

"It has been confirmed that the 2015 comfort women negotiation between South Korea had serious flaws, both in process and content," Moon said. 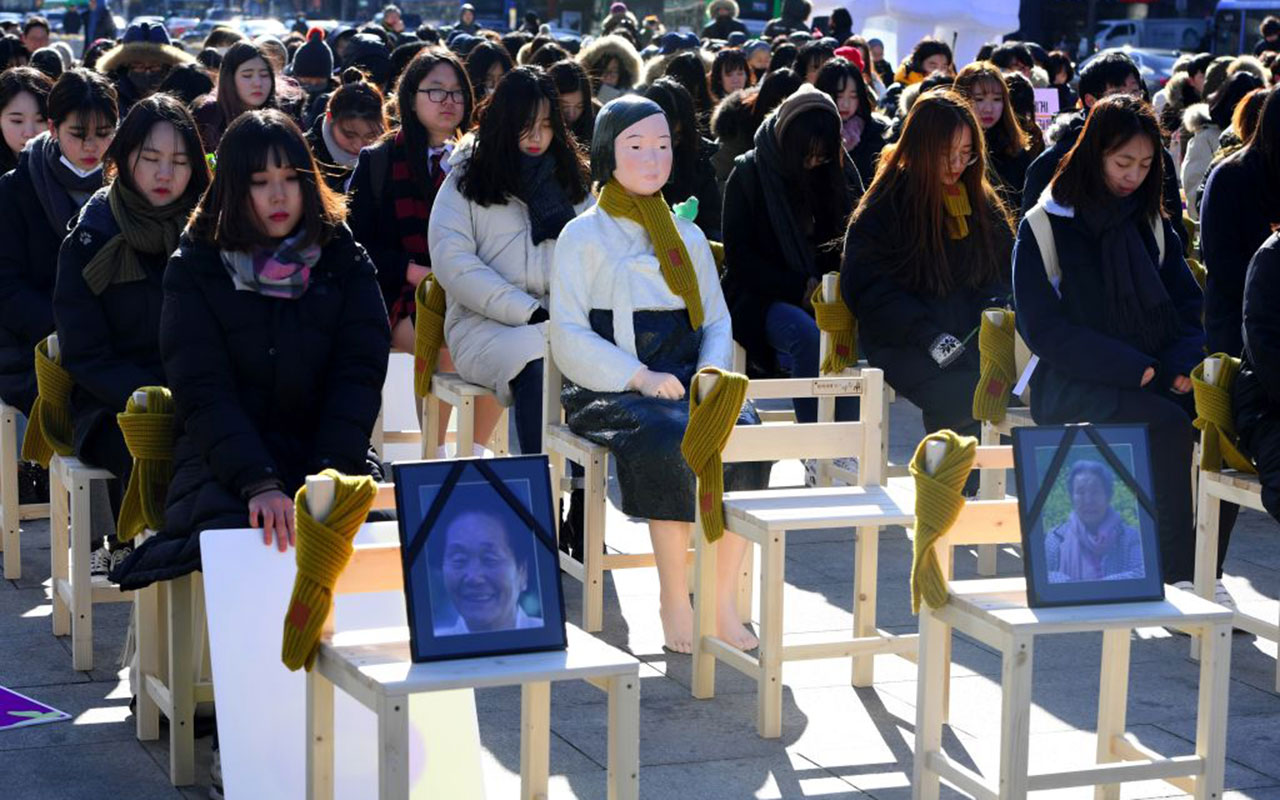 People sit around a statue of a 'comfort woman' (C) during an installation of empty chairs.
Getty

"Despite the burden of the past agreement being a formal promise between governments that was ratified by the leaders of both countries, I, as president and with the Korean people, once again firmly state that this agreement does not resolve the issue over comfort women."

Under the deal, Japan agreed to provide 1 billion yen in cash payments to the dwindling number of surviving victims, while South Korea said it will try to resolve Japanese grievance over the statue in front of the embassy.

Disputes over sex slaves are a legacy of Japan's 1910-45 colonial occupation of the Korean Peninsula.

Historians say tens of thousands of women from around Asia, many of them Korean, were sent to front-line military brothels to provide sex to Japanese soldiers during World War II. South Korean Foreign Minister Kang Kyung-wha speaks before a briefing on the result of the task force reviewing the 'Comfort Women' agreement.
Getty