A series of incidents involving extreme Christian teachings about wives submitting to husbands, gender roles and Harry Potter being witchcraft in NSW public schools has led to renewed calls to ban scripture classes during school hours.

A fight over the content of scripture classes in public schools is underway following a series of incidents this year that revealed controversial Christian material was being taught by scripture teachers, some of whom represent some of the state's biggest Church groups.

The material includes messages about children being sinners, that wives should submit to their husbands, that men should be masculine and women feminine, and that Harry Potter and Twilight are evil witchcraft.

The stakes are heightened because the NSW government is currently considering the future of scripture classes in NSW, known as Special Religious Education (SRE), with a final report due at the end of the year. Victoria announced earlier this year it would remove scripture from the curriculum during school hours.

Scripture materials produced by website Seed: SRE which are not on the approved curriculum include lessons for year eight students about mistakes women make such as talking too much, paying for things and not allowing men to chase them.

Another lesson for year seven students talks about how the film series Harry Potter and Twilight are ‘witchcraft’ and ‘evil’. It also warned against séances, horoscopes and Ouija boards.

SBS understands Seed: SRE material had been taken into at least four NSW schools. Testimonials on the organisation’s website seen by SBS had written praise from a number of school scripture teachers in NSW.

At Evans River K-12 public school on the NSW North Coast, Principal Robert Walker told SBS the school, along with others, had been asked this year by the NSW Department of Education to ensure appropriate materials were being taught to students during SRE.

“The Department issued an advisory note that they had feedback that material not age appropriate was being used and that it was not approved,” he said.

“It was something the department raised a while ago, and had been dealt with.”

Mr Walker said members of the school's teaching staff attended scripture classes to ensure only approved material was being taught to students.

“We always have teaching staff in the room when it is being delivered, there are no issues.”

The Seed: SRE website appears to have been taken down and SBS was unable to reach the organisation for comment at the time of writing.

The Department did not respond to specific questions about Seed: SRE material in classrooms.

Generate Ministries, an alliance of the Anglican, Presbyterian, Baptist and Scripture Union churches runs scripture in around 100 high schools. General manager James Flavin, admitted there had been issues with unapproved material being brought in by some SRE teachers.

“From time to time we are aware some teachers have done it and there has been a review and discipline process that has gone into place,” he told SBS.

“When we hear that one of our people has been accused of something we do pursue it, but it’s been a little while since that has come to our attention and we have worked very hard in the last few years especially to ensure that all our teachers understand the importance of following the curriculum.”

However, it is not just unapproved material that has drawn criticism. A report commissioned by parents lobby group Fairness in Religion in Schools (FIRIS) claimed that curriculum material used by the largest providers of SRE; Generate Ministries as well as Youthworks, promoted sexism, homophobia and discrimination against students with disabilities and from multicultural backgrounds.

“Almost all of us are unembarrassed by our gender ... women are feminine and men are masculine. Gender-bending is the exception, and we know it when we see it,” states one passage in the approved book, You: An Introduction in a section about gender, and male and female roles.

Beyondblue CEO Georgie Harman said the book’s messages were wrong and could be damaging to young people.

“It’s not ok to make any young person feel that being different is wrong. Messages linking gender identity and sexuality with sin or uncleanliness are archaic, and to suggest ‘something is deeply wrong’ with people who express their true identity is disturbing.

The book was banned earlier this year by the department, but after lobbying by churches the books were returned to the curriculum.

Jon Thorpe is director of ministry support at the Anglican Church’s Youthworks, the biggest provider of scripture in NSW, and defended You: An Introduction and other material on the curriculum.

Mr Thorpe said parents could choose to opt out of SRE classes which are outside the normal school curriculum.

“I appreciate that Christians have a different view about roles and relationships compared to some in the community and that’s why there is a space to talk about it because this isn’t part of the secular curriculum that is given space.”

Although he defended the use of You: An Introduction, Mr Thorpe told SBS it would be unlikely to reappear on next year's curriculum because its pop culture references were becoming "out of date".

"We are probably going to remove (You: An Introduction), but not for the reasons people complaining about the books have suggested.”

Greens NSW Education spokesman MLC John Kaye said the banning and unbanning of the book You: An Introduction showed the NSW Government was beholden to Christian Church groups.

"Even if the Sydney Anglicans give up on this book, the devolved responsibilities mean that the Minister and the Department cannot honestly say it is not being used by other providers," Dr Kaye said.

"No student in a public school should be told that they are not normal, yet parents are wondering who is really taking responsibility for protecting their children from these messages."

Is SRE being adequately monitored?

There are more than 100 organisations listed as approved providers of SRE in NSW schools on the NSW Department of Education's website, the majority of which are affiliated with Christian churches and organisations. Some only provide SRE services to one or two schools while others provide teachers and materials to hundreds. A primary complaint from parents and others opposed to SRE is that the department has little or no control over what goes on in the classes.

Dr Cathy Byrne is a former teacher who has completed a PhD in the area of religious education and has firsthand experience as a parent with SRE. Dr Byrne said she was horrified when her daughter came home talking about being enrolled in a scripture class and some of the content after she had specifically nominated no religion on her daughter’s enrolment form.

“The material is damaging and the church groups like Youthworks and Generate Ministries have said they will withdraw it, but there is no system by which the Department can make sure that actually happens,” she told SBS.

“The material is a very extreme version of one type of Christianity that is evangelical and quite fundamentalist and it undermines the Department of Education’s policies on social inclusion and student wellbeing.”

In You: An Introduction one lesson tells students that: “Through submission to their husbands, wives will model the way in which God's people yield to the headship of Christ."

FIRIS spokeswoman Lara Wood said the legislation around SRE allows organisations to come into schools with no oversight of what they are teaching in classrooms from the Department.

“The Department wouldn't have a clue, if you contacted them and asked ‘where have these materials been used and have you ever bothered to find out?’ They wouldn't know,” she told SBS

“They have been quite happy to take a hands off approach to the whole thing.”

A spokesperson for the NSW department of Education told SBS that SRE providers give an “annual assurance” that they would only teach approved curriculum material.

“The Department is committed to working with all approved providers to ensure any materials used for the purposes of Special Religious Education in NSW public schools are consistent with Departmental policies and delivered in an age appropriate and sensitive manner,” he said.

Is parental consent being sought?

Dr Byrne said the issue is not just the material in the classes; it was that parents were not being informed when their children were put in into SRE classes. Parents have to actively request the school remove their child, otherwise they are automatically placed in SRE, she said.

“I didn’t even see my daughter’s enrolment form until after she’d been put in a religious instruction class without my consent and I know that has been the experience of many parents."

“The enrolment form had been prefilled by the school and listed my daughter as Anglican,” she told SBS.

A spokesman for the Department denied students were automatically enrolled in scripture.

"Parents who choose not to send their children to SRE are informed they can contact the school to enquire about Ethics classes, which are available at some NSW schools," he told SBS.

Jon Thorpe said SRE was not about recruiting anyone to a particular church, but about giving students the option to hear Christian teachings if they wish.

"In terms of separation of church and state the school isn’t in a position where they have to endorse what Christians say – they are simply creating a space so that students can hear the Christian message and what the bible has to say," he said.

Ms Wood said there was no room in schools for these kinds of messages.

“Kids need to learn to respect each other and LGBTI youth, minorities; our ultimate goal is for that to happen in NSW, but in the interim we would at least like to see the program made more transparent with parents told upfront what they are signing up for and that their kids might be exposed to these controversial lessons and we want the Government to take responsibility for what is in the classroom,” she said.

The NSW Government’s review into SRE is due to report on December 31. 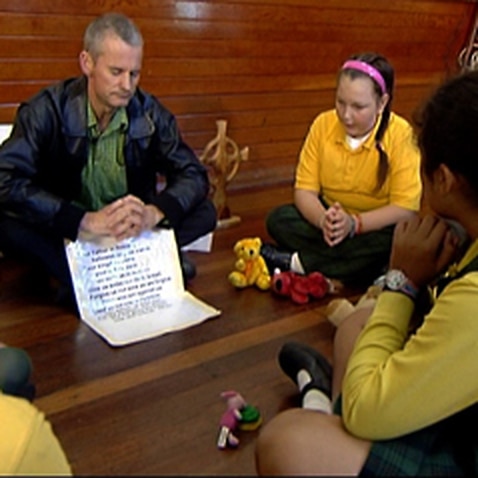 Religion in the Classroom