For all the times he has stepped before the cameras, for all the media attention he has received, it is still difficult to bring Scott Morrison into sharp focus.

Is he the hard-line immigration minister who stopped the boats, or is there still something left of the freshman MP who devoted his maiden speech in parliament to calling for greater humanitarian aid to Africa, quoting Bishop Desmond Tutu and Bono? 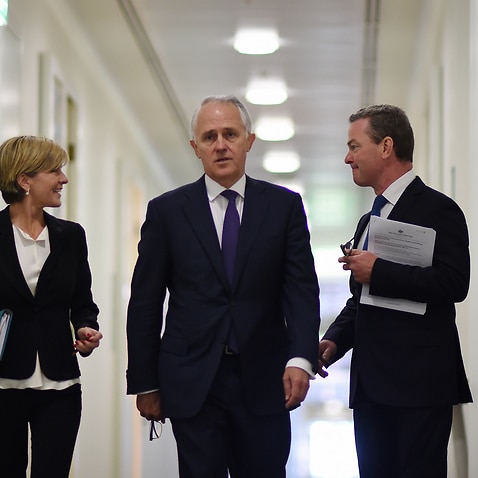 Ministry to be sworn-in on Monday: PM

Is he the evangelical Christian who worships at a Hillsong-style Pentecostal church in Sydney, or the one-time tourism chief who signed off on an international ad campaign that featured the buxom Lara Bingle and the ungodly slogan “Where the Bloody Hell Are You?”

Is he the cynical pollie who reportedly called, in shadow cabinet for the Liberal Party, to exploit fears over Muslim immigrants? Or the MP who completed the Kokoda trail as part of a mateship trek that included young Muslims from the western suburbs?

Is he, as Peter Hartcher of the Sydney Morning Herald suggested, “the greatest grub in the federal parliament” for stoking xenophobic and racist fears for political advantage, or does he deserve the acclaim of former prime minister Tony Abbott, who enthused: “There's no-one who is a more decent and a more compassionate and a more sensitive person in public life.”

His secret but now highly-publicised lunch with Rupert Murdoch feels like a blessing. In the News Corp stable, presumably he now enjoys a kind of Panchen Lama status.

Divining his true identity has become all the more important, now he has become Treasurer. Moreover, if Malcolm Turnbull loses the next election, then Morrison is well positioned to succeed him as leader.

His secret but now highly-publicised lunch with Rupert Murdoch feels like a blessing. In the News Corp stable, presumably he now enjoys a kind of Panchen Lama status.

Turnbull: I am a hard man, a feminist

Trying to make sense of this politician of multiple entendre, for a profile ahead of the 2012 election, I spoke to his father, John, who told me that he recognised his son more in the soft-hearted words of his maiden speech than the sloganeering of Stop the Boats.

“That speech says what he is and the way he thinks,” he told me.

But the view of a proud father was hard to marry with Morrison’s criticism in February 2011 of the Labor government, when it paid for a grieving father detained at Christmas Island to attend the funeral in Sydney of his wife and two small children – who had drowned before reaching shore.

Back then, the word that repeatedly came up in interviews with one-time colleagues from the tourism sector and fellow travellers in the Liberal Party was “opportunism.” Often, it was accompanied by the adjectives “craven” and, from a fellow Liberal MP, “supreme”.

As the party lurched to the right, following Tony Abbott’s ouster of Malcolm Turnbull, so too did this ambitious MP who had entered parliament as a moderate.

He has brought the talents of a marketeer to the political arena: good communication skills and an ability to deliver tailored messages with a specific audience in mind – for much of his time as immigration minister, the western suburbs and The Daily Telegraph.

The shift has even earned him the nickname “fluffy Morrison.”

The key difference from his pre-parliamentary career is that he has been marketing himself. It is not that he is unprincipled. His Christian faith is often his guide – his maiden speech also eulogised William Wilberforce. But the shift from the compassion of that address to the mean-spiritedness over the 2011 boat tragedy seems to have been emotionally uncomplicated. It was a matter of politics.

More recently, Morrison has again demonstrated his skill as a political shape-shifter. Billed as the minister best able to stop the bludgers following his success in stopping the boats, Morrison has played the hard man. Not only has he targeted young job seekers for regarding welfare as “an IKEA catalogue,” he has vilified “rorting” mothers for claiming both government and employer-paid parental leave schemes, which made them “double dippers.”

For all that, he has refused to be typecast, and has unexpectedly projected something of a softer image during his time at Social Services. Following an outcry, he backed down on the double dippers controversy, saying the system was the problem, “not the individuals.”

Ditching what many regarded as a dictatorial style of management at Immigration, he’s become more consultative. Many welfare groups much prefer Morrison to his predecessor, Kevin Andrews. The shift has even earned him the nickname “fluffy Morrison.”

Pauline Hanson recently said she would prefer him as prime minister to Abbott.

Then there are the optics, like the recent interview in Australian Women’s Weekly, adorned by the obligatory family photo-shoot. Better still, it came with the encomium, from the magazine’s politically well-connected editor Helen McCabe, that he was “ready to lead”. The reporter Phillip Coorey called it “the old family profile in the Australian Women’s Weekly trick”.

On his reactivated Twitter feed –  itself a sign of growing ambition – he has called for an end to the boos directed against Adam Goodes. But at the same time, he has shored up his support on the right, by opposing same sex marriage and prioritising Christians when admitting Syrian refugees.

His border security credentials, to his fans at least, are impeccable. So much so that Pauline Hanson recently said she would prefer him as prime minister to Abbott.

It’s his tacking and manoeuvring that makes him such a formidable figure, because it has allowed him to emerge as a compromise candidate for the leadership; someone who could unite the party. Highly popular on the right, he has also maintained old friendships with moderates. A spell at Treasury would enable him to beef up his curriculum vitae – and serve as a kind of finishing school.

My hunch is that Scott Morrison doesn’t spend much time agonising over the contradictions that have marked his career, or fretting about the veering course of a political journey that has taken him from the moderate wing of the party, to the right. The main point for him is that his career has been heading in an ever-upward trajectory.