Since emerging in China in December, COVID-19 has infected more than a million people - including at least 540,000 in Europe - and claimed more than 51,000 lives.

The number of confirmed coronavirus cases around the world soared past one million on Thursday and deaths topped 50,000 as Europe reeled from the pandemic and the United States reported the highest daily death toll so far of any country.

Despite more than half the planet imposing some form of lockdown, the virus claimed thousands more lives, with the US, Spain and Britain seeing the highest number of daily fatalities yet. A public service sign reading 'Stay Home, Save Lives' is displayed on a road in London, Britain, 02 April 2020.
AAP

And it continued to wreak havoc on the global economy, with the US announcing that a record 6.65 million workers filed for unemployment benefits last week and Spain reporting its biggest monthly increase in jobless claims ever.

Since emerging in China in December, COVID-19 has infected more than a million people - including at least 540,000 in Europe - and claimed more than 51,000 lives, according to a tally by AFP from official sources.

Countries are asking ppl to #stayhome & shutting down population movement to limit #COVID19 transmission. These steps can have unintended consequences for the poorest & most vulnerable. I call on countries to ensure these populations have food & life essentials during the crisis.

World Health Organization head Tedros Adhanom Ghebreyesus said there had been a "near exponential growth" in new cases and that the number of infected would hit a million within days.

The crisis has put enormous strain on national health care systems and on nurses, doctors and other medical staff working in the most difficult of circumstances.

"Every morning before I start work, I make the sign of the cross, and pray that everything will go all right," Ester Piccinini, a 27-year-old nurse at the Humanitas Gavazzeni hospital in Bergamo, northern Italy, told AFP.

"It's not really for myself, I'm not really worried about me, since I'm so protected. But I hope everything will be all right for my patients." 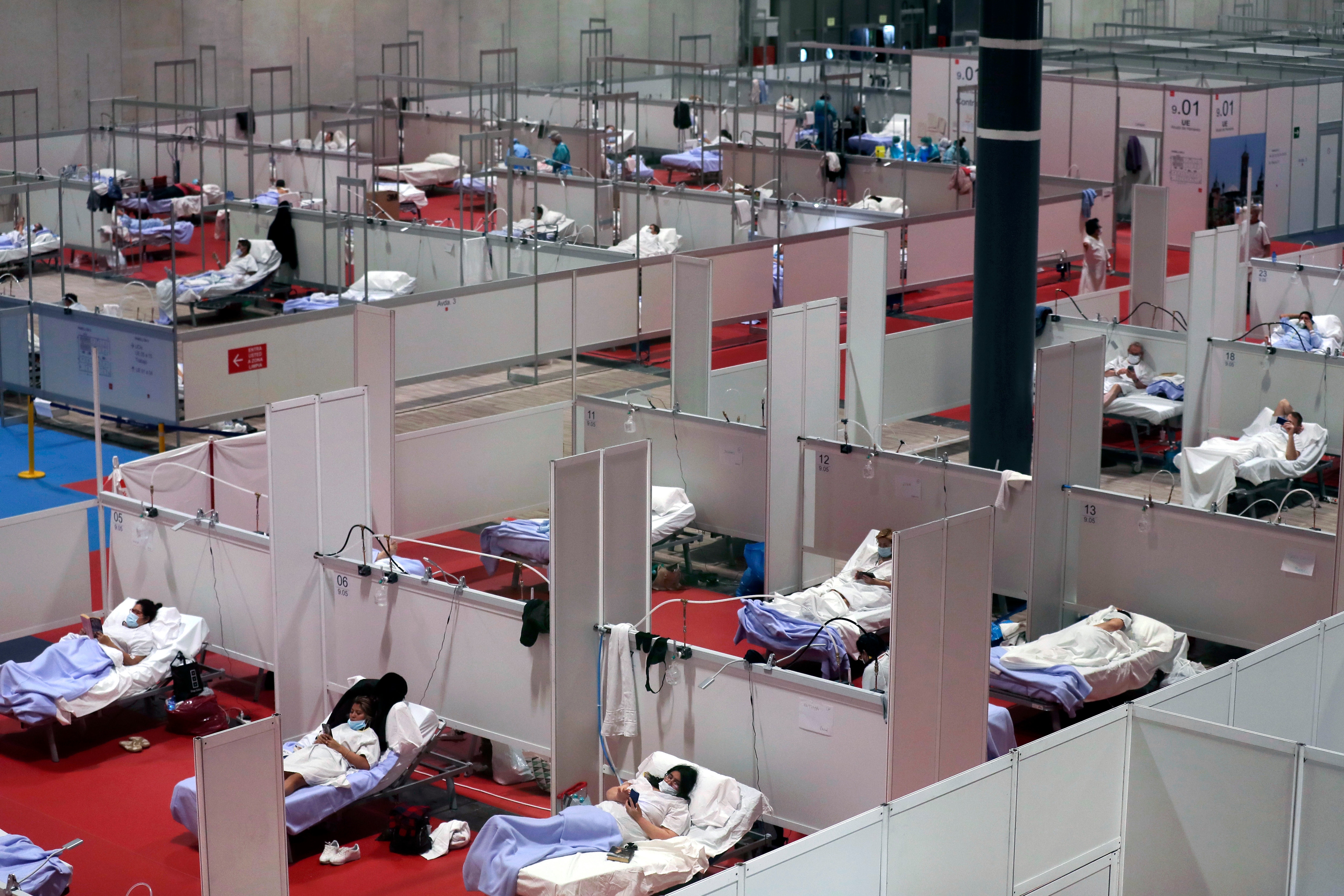 A view of a temporary field hospital set at Ifema convention and exhibition of in Madrid, Spain.

Europe has been at the centre of the crisis for weeks, with at least 37,000 now dead, but there have been signs the epidemic could be approaching its peak.

Spain, with 950 new deaths in 24 hours, and Britain, with 569 deaths, saw record numbers of new fatalities on Thursday.

France recorded 471 hospital deaths, down from the previous day, but also announced a new figure of 884 deaths in old people's homes since the epidemic began.

Italy registered 760 new deaths, with its numbers continuing to fall.

The number of confirmed Spanish cases also passed the 110,000 mark, the government said, although the rates of both new infections and deaths continued a downward trend.

"The data show the curve has stabilised" and the epidemic has entered a "slowdown" phase, Health Minister Salvador Illa said.

The virus has chiefly affected the elderly and those with pre-existing medical conditions, but recent cases have highlighted that it can kill people of all ages. In Russia, President Vladimir Putin extended a period of paid non-working days until the end of April as the number of confirmed cases jumped by more than a quarter on Thursday to 3,548, with 30 deaths.

Most of the Russian population is on lockdown, with Moscow, in particular, facing tough isolation rules.

Thailand became the latest country to impose strict measures with the introduction of a curfew from Friday, pushing the number of people in confinement to 3.9 billion, or half the world's population.

The United States, which now accounts for almost a quarter of reported global infections, saw its death toll pass 5,000 by the early hours of Thursday, according to a tally by Johns Hopkins University.

US President Donald Trump, who was criticised for initially playing down the virus but has stepped up containment efforts, warned that the situation was going to get much worse.

"We're going to have a couple of weeks, starting pretty much now, but especially a few days from now, that are going to be horrific," he said. "But even in the most challenging of times, Americans do not despair. We do not give in to fear."

Around 85 per cent of Americans are under confinement but there have been warnings of a staggering US death toll, even with mitigation efforts in force.

On Thursday the US disaster response agency FEMA asked the American military for 100,000 body bags.

The virus and the measures taken to contain it have raised fears of the worst global economic downturn since the Great Depression of the 1930s.

Massive amounts of medical supplies, even hospitals and medical centres, are being delivered directly to states and hospitals by the Federal Government. Some have insatiable appetites & are never satisfied (politics?). Remember, we are a backup for them. The complainers should...

The US Labour Department said Thursday that the figure of 6.65 million workers who filed for unemployment benefits last week was double the number registered in the previous week, and the most ever recorded.

Economists are warning that US job losses could surge to the previously unimaginable range of 10 to 20 million in April.