‘We take this measure as a last resort to respond to the accumulating harm caused by Pope Francis’s words and actions.’

A group of 19 Catholic priests and academics have urged bishops to denounce Pope Francis as a heretic, in the latest ultra-conservative broadside against the pontiff over a range of topics from communion for the divorced to religious diversity.

The most prominent of the group is Father Aidan Nichols, a 70-year-old British priest of the Dominican order who has written many books and is one of most recognized theologians in the English-speaking world. The others are less well known.

Pope Francis in the vatican. A group of 19 Catholic priests and academics have urged bishops to denounce him.
AFP

“We take this measure as a last resort to respond to the accumulating harm caused by Pope Francis’s words and actions over several years, which have given rise to one of the worst crises in the history of the Catholic Church,” they said in a 20-page open letter.

The letter attacks Francis for allegedly softening the Church’s stance on a range of subjects. They say he has not been outspoken enough against abortion and has been too welcoming to homosexuals and too accommodating to Protestants and Muslims.

It was published on Tuesday by LifeSiteNews, a conservative Catholic website that often is a platform for attacks on the pope. Last year, it ran a document by the Vatican’s former ambassador to Washington, Archbishop Carlo Maria Vigano, calling on the pope to resign. A Vatican spokesman had no comment on the letter, which includes dozens of footnotes, Bible verses, pronouncements by previous popes, and a separate bibliography. The letter invites people to join an on-line signature drive. Addressing the bishops, the letter says “We therefore request that your Lordships urgently address the situation of Pope Francis’s public adherence to heresy.”

It asks them to “publicly to admonish Pope Francis to abjure the heresies that he has professed”.

Deciding whether a Church member is a heretic is the job of the Congregation for the Doctrine of the Faith, the Vatican’s doctrinal watchdog department.

Massimo Faggioli, a well-known professor of historical theology at Villanova University in the United States, said the letter was an example of the extreme polarisation in the Church.

“There is overwhelming support for Francis in the global Church on one side, and a tiny fringe of extremists trying to paint Francis as a pope who is heretic. The problem is that there is very little legitimate, constructive critique of Francis’ pontificate and his theology,” he said in an email.

A significant part of the letter concentrates on “Amoris Laetitia” (The Joy of Love), a 2016 papal document that is a cornerstone of Francis’ attempt to make the 1.3 billion-member Church more inclusive and less condemning.

In it, Francis called for a Church that is less strict and more compassionate towards any “imperfect” members, such as those who divorced and later remarry in civil ceremonies.

Under Church law they cannot receive communion unless they abstain from sex with their new partner, because their first marriage is still valid in the eyes of the Church, unless they have received an annulment. The Church does not allow divorce.

Francis has opened the door to some exceptions, allowing the decision whether the person can be fully re-integrated and receive communion to be made by a priest or bishop jointly with the individual on a case-by-case basis. 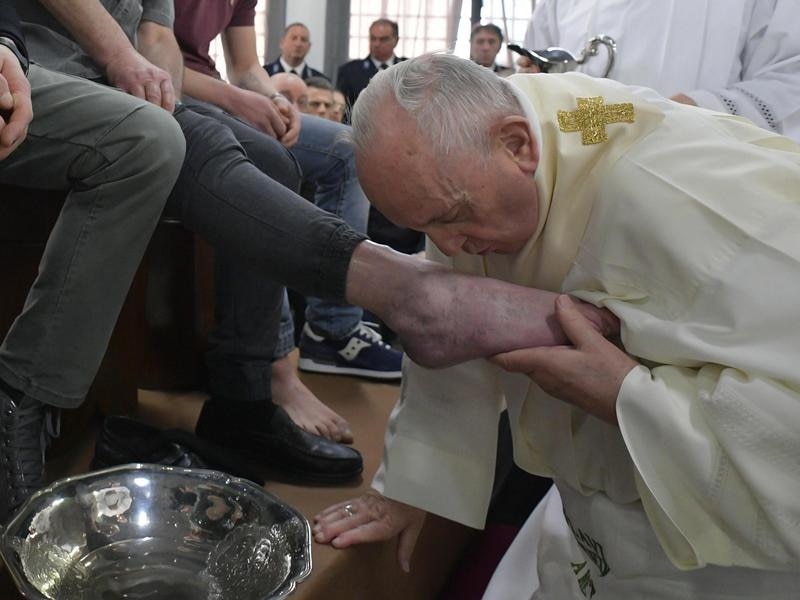 Pope Francis washes the feet of inmates during his visit to a prison near Rome.
AP

After Amoris Laetitia was published, four conservative publicly challenged the pope, accusing him of sowing confusion on important moral issues. He has thus far not responded to their demands that he clear up their doubts.

The new letter lists pages of what it calls “Evidence for Pope Francis being guilty of the delict (crime) of heresy”.

It attacks him for having once said that the intentions of Martin Luther, the father of the Protestant Reformation, “were not mistaken”. It says he has not condemned abortion strongly enough and is too lenient with homosexual Catholics. 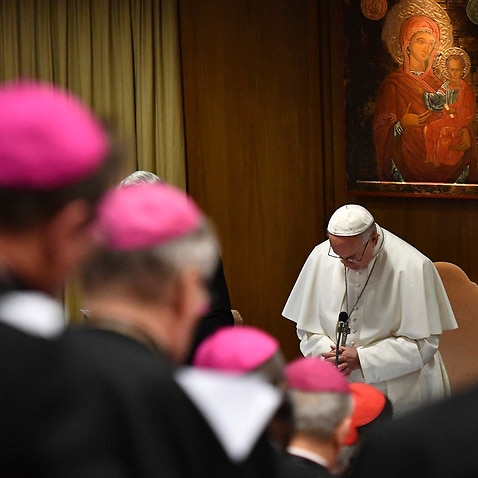 The letter criticized Francis for signing a joint statement with Lutherans in 2016 in which the pope said Catholics were grateful for the “theological gifts” of the Reformation.

It attacked the pope for a common statement with a prominent Muslim leader in Abu Dhabi in February which said the pluralism and diversity of religions was “willed by God”. Conservatives say the Roman Catholic Church is the only true one and that members are called to convert others to it.