A group of conspiracy theorists have been arrested after defying lockdown laws and holding a rally against vaccinations and 5G at Victoria's state parliament.

Ten people have been arrested for breaching the Victorian government's lockdown rules and clashing with police at a rally.

Around 100 people gathered at the steps of state parliament on Sunday to protest against 5G, vaccinations, Victoria's lockdown restrictions and what they called the "coronavirus conspiracy".

The protesters carried signs that read "Fight for your freedom and rights".

Footage on social media shows protesters clashing with Victoria Police, who confirmed 10 people, including two of the event's organisers, were arrested.

The majority of those arrested were fined for failing to comply with the lockdown laws and will likely face a $1,600 fine each while three offenders are expected to be charged with assaulting a police officer.

Another protester is also expected to be charged for allegedly throwing a bottle at police.

All offenders were released pending summons. 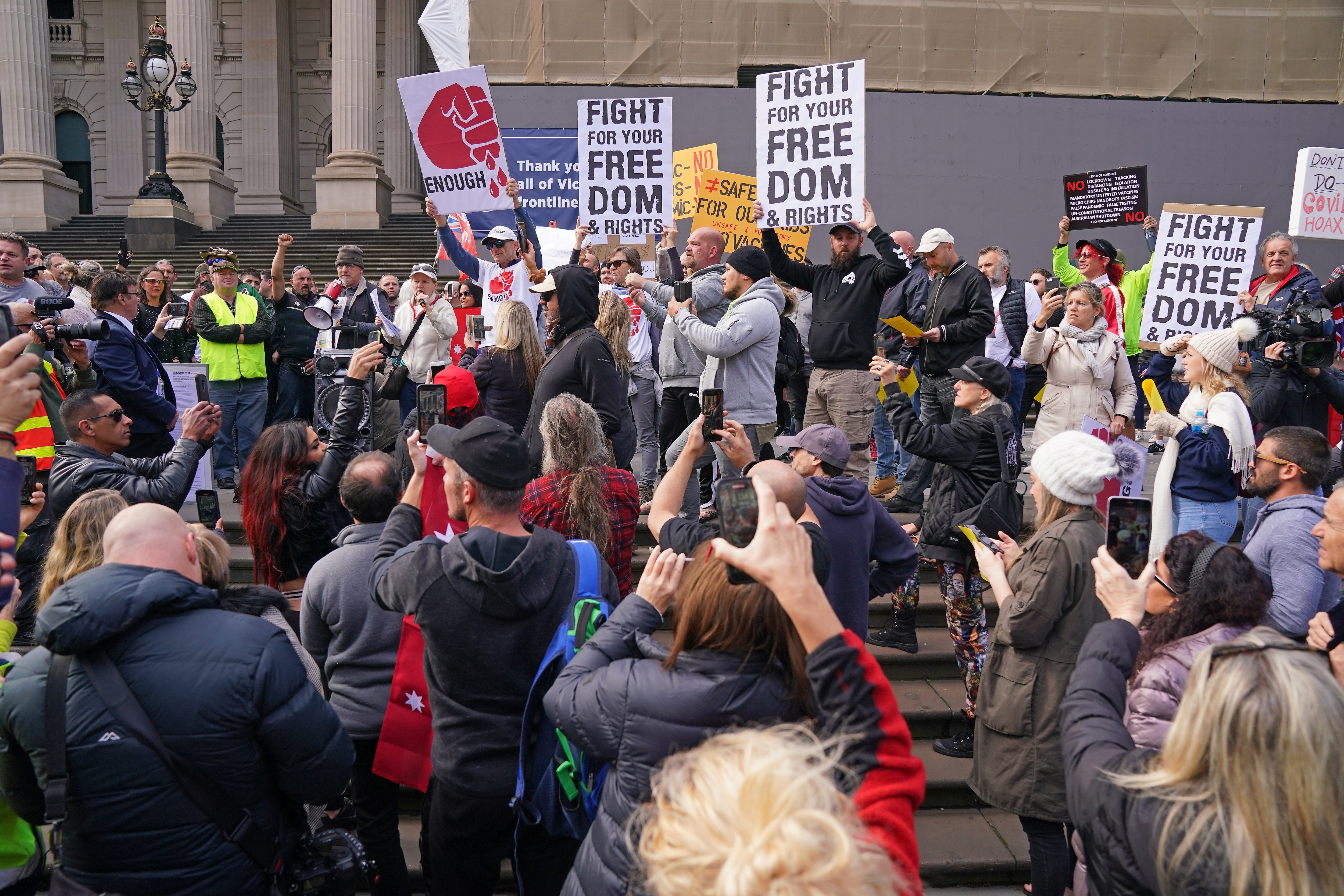 Anti-vaxxers and Victorians fed up with the coronavirus lockdown have broken social distancing rules to protest in Melbourne's CBD.
AAP

A police spokeswoman confirmed capsicum sprayed spray was used during the arrest of one person and that the crowd dispersed shortly after.

A police officer, meanwhile, has been taken to hospital for what is believed to be a rib injury.

"Police are continuing to investigate the events of today in order to identify other people who were in attendance," the spokeswoman said.

"Once individuals are identified, we will be issuing them with fines and will consider any other enforcement options."

Australia's Chief Medical Officer Brendan Murphy said a number of conspiracy theorists had contacted him, describing their views as "nonsense".

"It is complete nonsense. 5G has got nothing at all to do with coronavirus," he said in Canberra.

"Similarly, I understand people have the right to protest, but they should not be breaching those social distancing rules and if they are, they should be held to account." It's up to 'mobile, active adults' to keep coronavirus at bay, says CMO Brendan Murphy

Police Minister Lisa Neville had earlier warned people against attending the protest, saying police would issue $1,652 fines to those who attended.

"All I can say to people is again, rethink whether you're going to go to those protests," she said earlier in the week.

This is at least the second time protesters have gathered to oppose the coronavirus lockdown in Victoria.

Victoria has been in a state of emergency since 16 March, with stage three restrictions designed to stop the spread of coronavirus in place.

Under the restrictions, Victorians are only supposed to leave their homes for food and supplies, medical care and caregiving, exercise, and work or education.

Premier Andrews indicated on Friday he would be making a series of announcements regarding the lifting of restrictions throughout the week.

It came after Prime Minister Scott Morrison revealed a plan for a gradual return to normality, but it is up to the states when to implement the measures.