'Coolest monkey in the jungle': H&M in hot water after 'distasteful' hoodie ad

A H&M hoodie reading 'Coolest Monkey in the Jungle' modelled by a black child has been branded as a 'racist' move on social media. 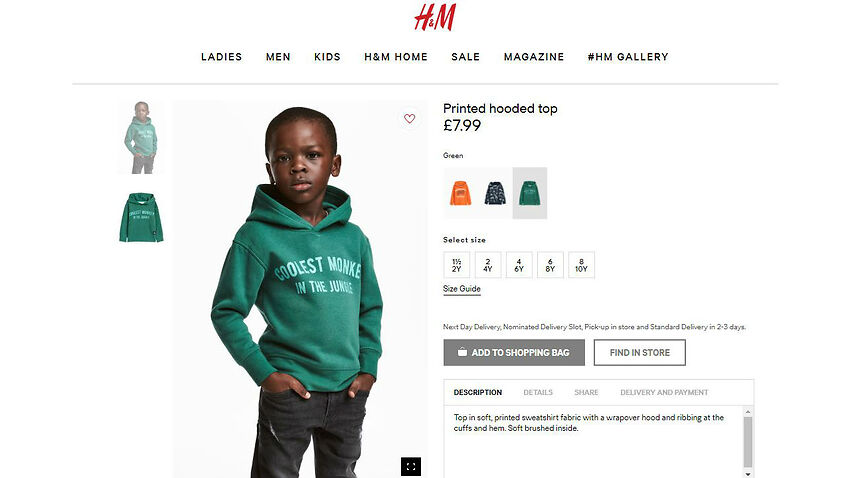 A black boy models a hoodie with the slogan 'coolest monkey in the jungle' on the H&M website. Source: H&M

Swedish fashion giant H&M has been accused of being 'distasteful' after a black child modelling a hoodie reading 'Coolest Monkey in the Jungle' featured on its website.

Many interpreted the image as "inappropriate", "offensive" and "racist", with some taking to Twitter to slam the move. Several threatened to boycott the brand.

"This is completely distasteful," one wrote. Meanwhile while another said: "H&M this sweatshirt is a disgrace you should be ashamed of yourselves."

.@hm this is inappropriate, offensive, and racist. Why is the white kid "a jungle survivor" and the black kid the "coolest monkey in the jungle"? How do you think this is okay? REMOVE this and the clothing piece. This is completely distasteful! #racist #hm https://t.co/uati7eI0Io pic.twitter.com/WSF9Wiksio

In the year 2018 there’s no way brands/art directors can be this negligent and lack awareness. If look at other sweaters in same category they have white kids. We have to do better. pic.twitter.com/Av4bS4t6yn

Every company should invest in training that encompasses cultural competency and sensitivity. It is absolutely necessary. @hm pic.twitter.com/efMR0oL3jx

. @hm, have you lost your damned minds?!?!?! pic.twitter.com/EYuCXLZtv3

Meanwhile others defended the organisation.

One Twitter user responded: "I see a sweet little black boy wearing a sweater with 'coolest monkey in the jungle'. I see nothing else. Hope this helps."

Another added: "Perhaps it was an innocent mistake and no-one even thought that they injected racism into the ad."

The photograph of the black child in the hoodie has since been taken down.

In a statement, H&M told SBS News: “This image has now been removed from all H&M channels and we apologise to anyone this may have offended.”

Well. I see a sweet little black boy wearing a sweater with ‘coolest monkey in the jungle.’ I see nothing else. Hope this helps.

Perhaps it was an innocent mistake and no one even thought that they injected racism into the ad, like those reacting?