Catalan leaders say they want to remain part of the European Union in the event of independence from Spain, but the path to continuing membership or rejoining the bloc is not clear.

Brussels has stuck to its line that an independent Catalonia would automatically be out and have to reapply to join, but some experts say pragmatism may yet trump dogma.

Would the EU recognise Catalonia?

Last weekend's referendum produced a 90 percent vote for secession, but because it was held in defiance of Spain's Constitutional Court rulings that it was unlawful, from the EU's point of view it amounts to a deeply flawed mandate.

European Commission President Jean-Claude Juncker has made it clear Brussels would only respect a vote for independence if it was held in line with the Spanish constitution.

EU members "will not recognise Catalonia as a state if it is created in violation of the law and particularly the Spanish constitution", said Jean-Claude Piris, an expert in European law. 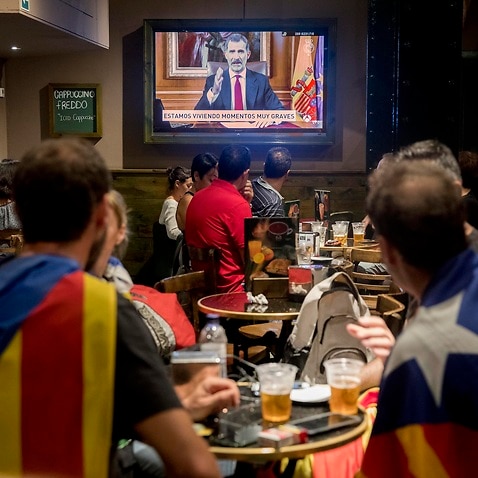 The EU's treaties do not specifically state what happens if part of a member state secedes, but since 2004 the commission has stuck to the "Prodi doctrine", named after former president Romano Prodi.

This says that a region breaking away from a member state would automatically cease to be part of the EU on the day of its independence, and would have to follow the usual membership process to rejoin.

Membership talks for Catalonia would likely be different from those currently under way for candidate countries such as the Balkan states and Turkey, which have to harmonise their legislation and foreign policy as well as bring human rights standards up to EU standards.

Catalonia has sought to get ahead on this point by passing a law last month that said all EU laws would apply in its territory even if it was no longer a member.

Questions have also been raised about the legal solidity of the Prodi doctrine and whether the relevant treaty clauses could be open to different interpretation.

A European Commission spokesman said Friday that "this is the way we read the treaty, this is our position" but acknowledged that "everybody has his or her right to his or her own opinion".

Senior French judge Yves Gounin warned in a 2014 article on independence movements that taking a hardline approach, kicking a newly seceded territory out of the bloc, could backfire on the EU.

"Europe would have everything to lose by putting these states in quarantine -- its investors could no longer invest there, its young people could not study there, its workers could not move freely," Gounin wrote.

Instead, he suggested that "realism" should trump "orthodoxy", arguing that "the most reasonable solution would be to negotiate independence and EU membership simultaneously".

But something like a precedent for this exists from the Scottish referendum of 2014 -- which was held with London's blessing -- and it is not promising for Catalan separatists.

To avoid a rupture, the Scottish government said that in the event of a "yes" vote, it would start pre-independence talks with the EU "to settle the terms of an independent Scotland's continuing membership".

This notion was slapped down by then European Commission chief Jose Manuel Barroso, who warned it would be "extremely difficult".

However, Scotland voted to remain part of the United Kingdom.

Could Catalonia keep the euro?

There are numerous non-EU countries which use the single currency. Kosovo and Montenegro, which both separated from Serbia in the last 11 years, use the euro as their national currency with no formal agreement with the EU.

Monaco, San Marino, Andorra and the Vatican also use the euro and have agreements with the EU allowing them to produce limited quantities of their coins with their own designs.