Cricket Australia says it will not host Afghanistan in a one-off men's Test in Hobart if women's cricket is not supported by the Taliban. 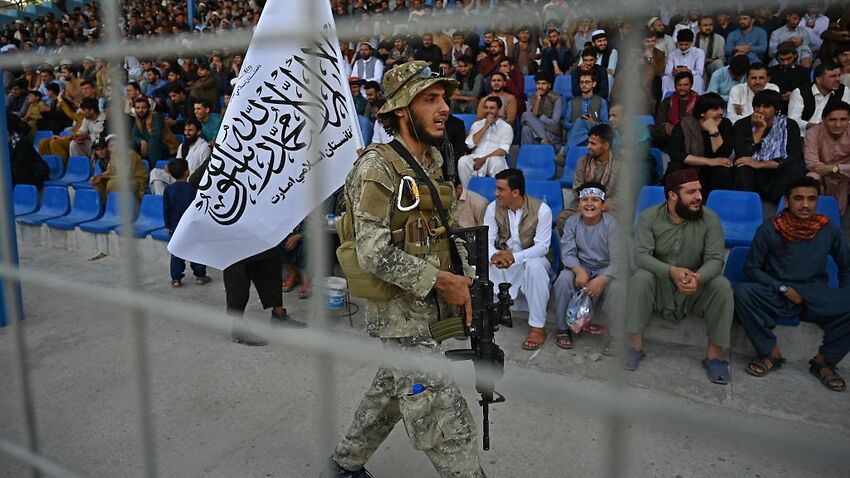 The Taliban have confirmed that women won’t be allowed to play cricket or any other sport. Source: AFP

Cricket Australia says it may cancel a historic men's cricket test between Australia and Afghanistan after SBS News exclusively revealed that the Taliban won't allow women to play sports, including cricket, which will "expose their bodies" or expose them to the media.

The first ever Test between the nations was scheduled to begin on 27 November in Hobart. But CA, under significant political pressure to act, has released a statement confirming its ready to cancel the fixture.

"If recent media reports that women’s cricket will not be supported in Afghanistan are substantiated, Cricket Australia would have no alternative but to not host Afghanistan for the proposed Test Match due to be played in Hobart," it said in a statement.

"We thank the Australian and Tasmanian Governments for their support on this important issue.

"Driving the growth of women’s cricket globally is incredibly important to Cricket Australia. Our vision for cricket is that it is a sport for all and we support the game unequivocally for women at every level."

CA's comments follow an earlier statement by world governing body the International Cricket Council, which told SBS News it would discuss the impact of the Taliban's comments on the country's membership with its board.

The Taliban's deputy head of its cultural commission, Ahmadullah Wasiq, said that sport is not seen as something that is important for women.

"I don't think women will be allowed to play cricket because it is not necessary that women should play cricket," Mr Wasiq said.

"In cricket, they might face a situation where their face and body will not be covered. Islam does not allow women to be seen like this.

"It is the media era, and there will be photos and videos, and then people watch it. Islam and the Islamic Emirate do not allow women to play cricket or play the kind of sports where they get exposed."

An official ICC spokesperson said it is committed to the long-term growth of women’s cricket and it was "concerned" that women in Afghanistan will no longer be allowed to play.

"Despite the cultural and religious challenges in Afghanistan, steady progress had been made in this area since Afghanistan’s admission as a full member in 2017" a ICC spokesperson said.

"The ICC has been monitoring the changing situation in Afghanistan and is concerned to note recent media reports that women will no longer be allowed to play cricket.

"This and the impact it will have on the continued development of the game will be discussed by the ICC Board at its next meeting," the spokesperson added.

EXCLUSIVE - An official @ICC (International Cricket Council) spokesperson has told @SBSNews that it is 'concerned' that women will no longer be allowed to play cricket under Taliban rule. Afghanistan's membership status will be discussed at the next ICC board meeting. pic.twitter.com/4PwogHTbrk

Afghanistan is one of 12 full members of the ICC that are permitted to play official test matches.

But the Taliban's announcement puts Afghanistan's membership in doubt, with full members required to have both a men's and a women's national side.

Any changes to a nation's membership status must be passed by the ICC's board.

Tasmanian Premier Peter Gutwein reiterated on Thursday that he hoped the Test between Australia and Afghanistan would not take place.

"I think it's a disgrace that the Taliban have made a decision that they won't allow women to play sport," he said.

He said he had spoken with leaders of the Tasmanian Hazara community on Wednesday who were "very concerned" about the match going ahead.

"I would hope that under the current circumstances that the ICC and Cricket Australia would make the right decision in this case," he said.

Asked about the potential for the ICC to call off the test match in Australia, Mr Wasiq said the Taliban would not compromise.

"Even for this, if we face challenges and problems, we have fought for our religion so that Islam is to be followed. We will not cross Islamic values even if it carries opposite reactions. We will not leave our Islamic rules," Mr Wasiq said.

He said Islam allowed women to go out on a needs basis such as for shopping. Sport is not considered a need, he said.

"In cricket and other sports, women will not get an Islamic dress code. It is obvious that they will get exposed and will not follow the dress code, and Islam does not allow that."

The Taliban have confirmed that women won’t be allowed to play cricket or any other sport. Source: AFP

Australia's Minister for Sport Richard Colbeck says it's unacceptable that the Taliban would exclude women from sport.

"The Australian Government is deeply concerned about reports the Taliban in Afghanistan will ban women from playing sport," he said.

"We urge international sport authorities, including the International Cricket Council, to take a stand against this appalling ruling.

"The Taliban’s attitudes towards women and their individual rights should not be accepted by the international sporting community."

"Most Australians would be absolutely abhorred at the idea that girls (and) women wouldn’t be allowed to play sport," he told reporters in Canberra on Wednesday.

"This is something that our sporting codes will have to think about and look at very carefully.

"The idea that you would stop females playing sport is something that would go against what every Australian would think is the right thing to do."

Speaking to the BBC, several members of the Afghanistan women's cricket team said the Taliban had targeted players, issuing threats if they tried to play cricket again.

The Taliban announced their interim government on Tuesday. No women were included.

With reporting by Caroline Riches and AAP